Carol Curtis ’69, ’11 was 17 when she earned an associate degree and 61 when she earned a bachelor’s degree, both from Rider. Since marking that latest educational milestone in 2011, she has audited a class nearly every fall and spring semester.

Curtis has thoroughly enjoyed learning alongside her 20-something classmates, never feeling out of place at Rider. When she was randomly selected to receive a free year’s worth of tuition for providing proof of COVID-19 vaccination last fall, she asked Rider to choose someone else.

“I could have gone back to get my master’s, but I couldn’t knowing that there may be a kid struggling to pay for school or will be when they graduate,” she says. “Let somebody who needs it use it. This will be a good help for them so they can stay in school and earn their degree.”

Instead, she audited a class about Bruce Springsteen. She says that, after considering all her options, “Bruce won out.”

Multiple recordings by the Westminster Williamson Voices, conducted by Dr. James Jordan and featuring the work of many Westminster Choir College alumni, students and faculty, were released last fall.

Breathe Free composed by Dr. Sarah Rimkus and to know your love composed by Dr. Thomas LaVoy ’13 were released digitally in September. The album A Scattered Light in Winter was released in November. Scattered Light features a mix of poetry set to music and new arrangements of traditional carols and includes performances by Assistant Professor of Music Education Dr. Sangmi Kang, Assistant Professor of Voice Dr. Jay Carter and Associate Professor of Sacred Music Dr. Steve Pilkington, who accompanied the ensemble’s performance of his composition In the Bleak Midwinter. The recording also featured music composed or arranged by several Westminster Choir College alumni. 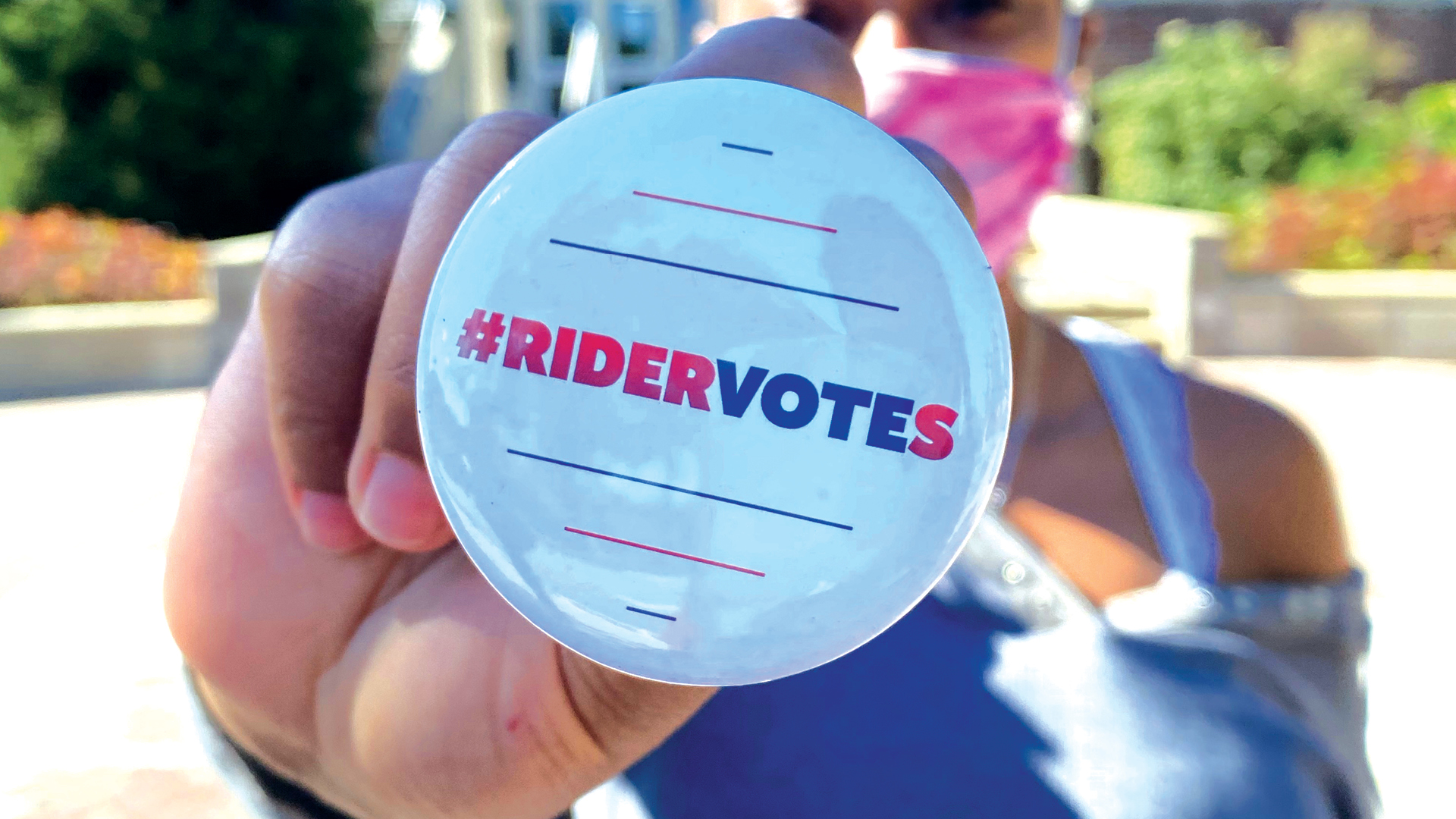 Student voter participation at Rider rose from 52% in 2016 to 74% in 2020. The rise was enough for Rider to earn a gold seal from the ALL IN Campus Democracy Challenge last fall. The accolade recognizes student voter rates of between 70-80% in the 2020 election.

Rider was designated a Special Olympics Unified Champion School last fall. It was one of only three institutions of higher education in New Jersey to receive such recognition in 2021. A Special Olympics Unified Champion School is defined by having an inclusive school climate that exudes a sense of collaboration, engagement and respect for all members of the student body and staff.

Over only three weeks in Kosovo last fall, Dr. Sharon Yang and her project team helped network 48 libraries throughout the country and create a shared library computer system. The work was supported by Yang’s second Fulbright Senior Specialist Award. Yang says the country is about 70 years behind American libraries, with many libraries in the country operating with no system at all. “Most did not even have a card catalog,” she says. “Some libraries just write their materials on pieces of paper or use an Excel sheet.” 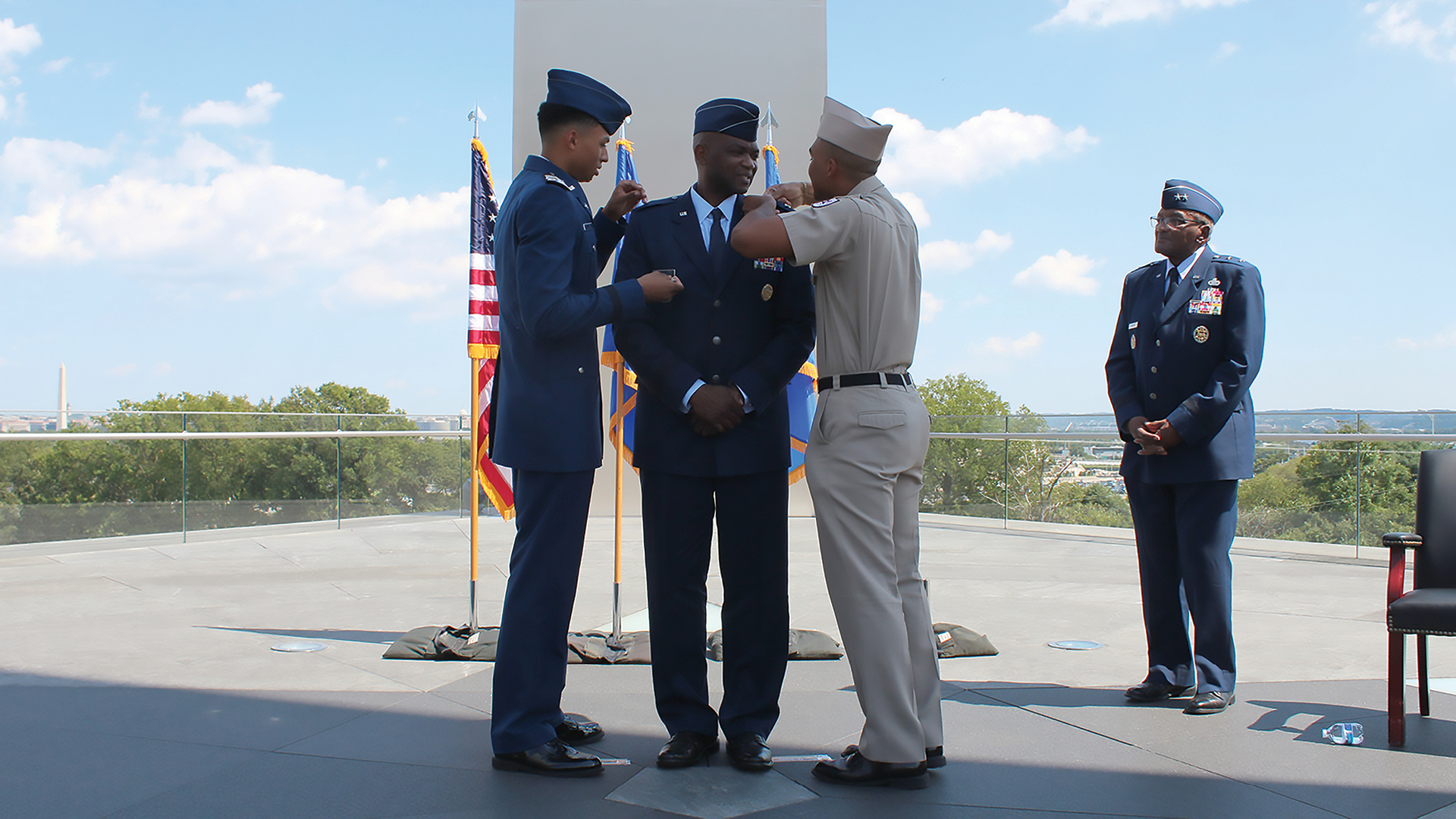 In service to the nation

Alfred K. Flowers Jr. ’95, ’97 was appointed brigadier general of the U.S. Air Force on Sept. 7, 2021, during a ceremony in Washington, D.C. The promotion burnishes a longstanding family legacy of serving the nation (Flowers’ father, retired Maj. Gen. Alfred K. Flowers Sr., is the longest-serving Airman in U.S. Air Force history). In this photo from the ceremony, Flowers Sr. looks on while Brig. Gen. Flowers Jr. (center) gets his new rank pinned on by his sons, Kendell Flowers (left), a cadet at the U.S. Air Force Academy, and Ayden Flowers, a cadet at Texas A&M. 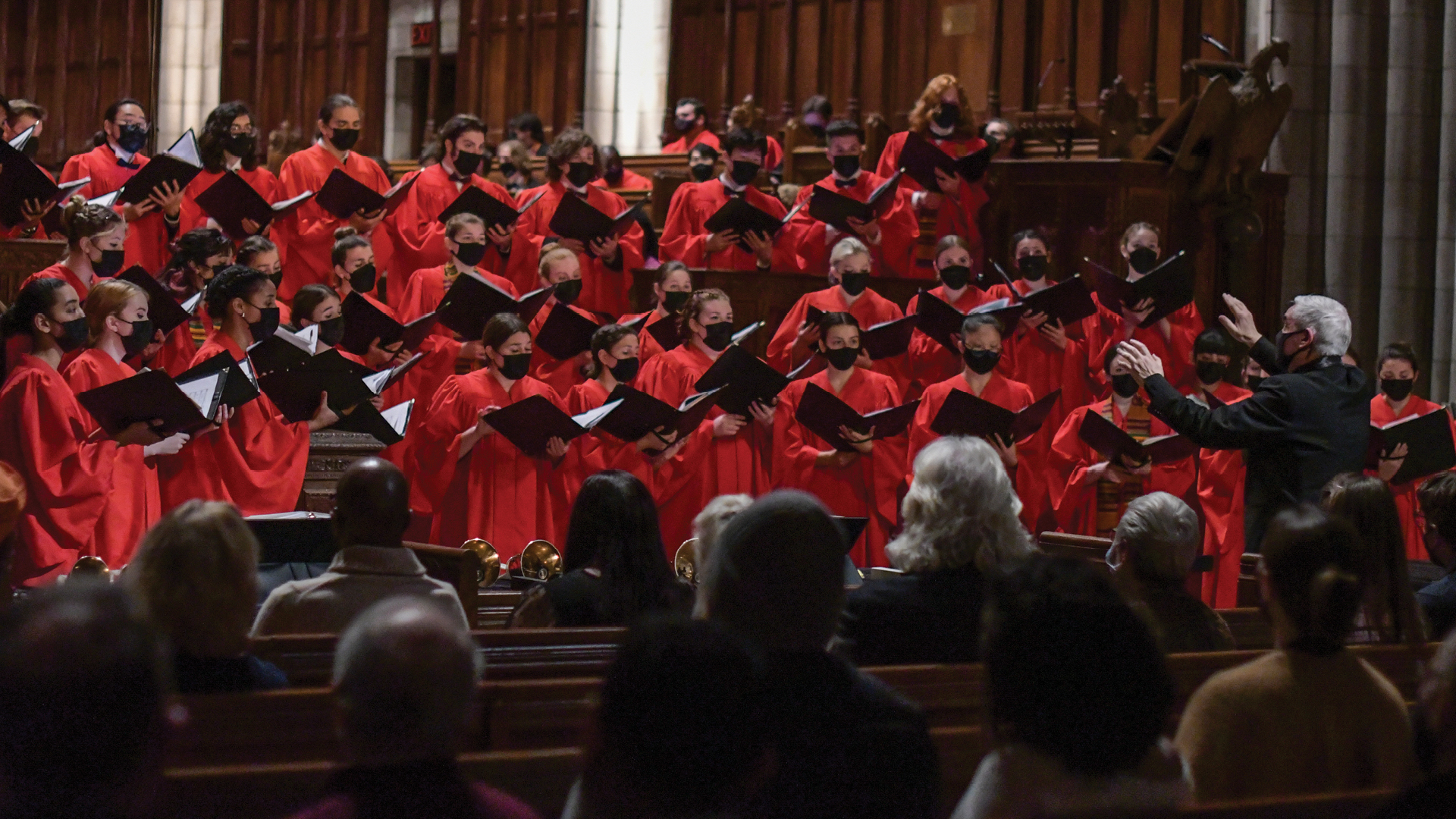 The Westminster Choir returned to live public performance following a 20-month absence because of the pandemic. Conducted by Dr. Lynnel Joy Jenkins ’94, the choir performed music that reflected the challenges and triumphs experienced by Westminster and musicians around the world. The sold-out performance in Gill Chapel preceded more returns to live performances throughout the semester for other choirs and ensembles, including Westminster Opera Theatre, the Westminster Jubilee Singers, the Westminster Concert Bell Choir and more. An Evening of Readings and Carols was also held in December, resuming a beloved annual holiday tradition. 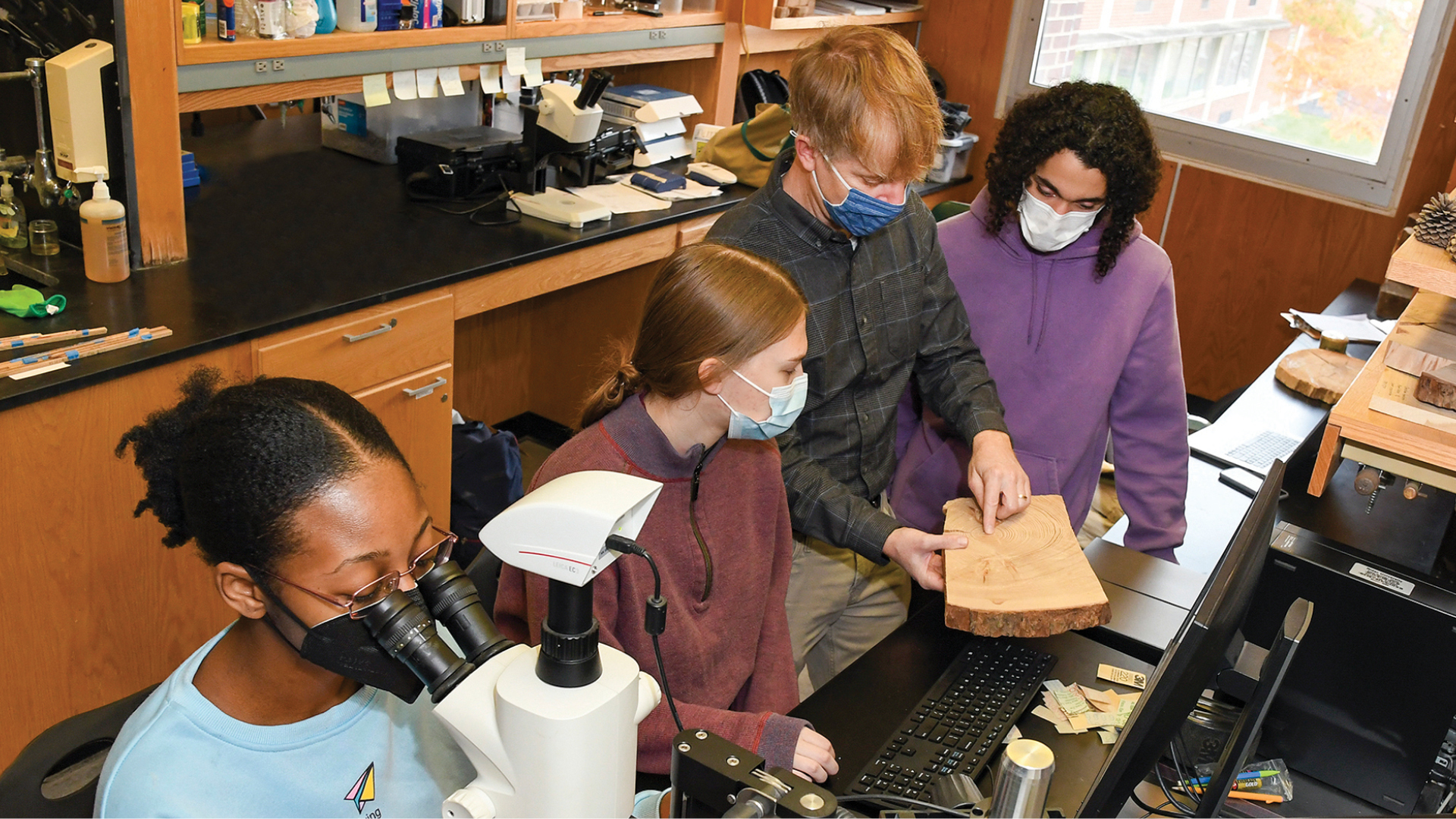 Lord of the rings

Dr. Daniel Druckenbrod was awarded a National Science Foundation grant as part of a multi-university project that will generate data about how the climate has changed over time in Southeast Asia, from the Himalaya to the Southern Ocean, over the past 500 to 1,000 years. The project will build on and expand Druckenbrod’s ongoing research of measuring tree rings, which indicate a tree’s growth rate over time, to make inferences about past events.

Three Rider students will assist Druckenbrod with primary data analysis as he pushes ahead into new territory. The scope of the three-year project will give these students the opportunity to conduct research over an extended period of time in collaboration with premier research institutions like Columbia. Their involvement may also include working on publications and conference presentations.

President Gregory G. Dell’Omo, Ph.D., was named to the NJBIZ Education Power 50 list for 2021. The annual list recognizes influential leaders in education from around the state. This year’s list was heavily influenced by the coronavirus pandemic and the way that colleges and universities in New Jersey responded to its impact.

Rider’s campus veterans affairs office was renamed The Dr. Eugene Marsh Center for Veterans and Military Affairs last November. The first space at the University to be named for a Black alumnus, it honors Dr. Eugene Marsh ’13, ’18, ’21, a passionate student, war hero and dedicated veterans’ advocate who died in January 2021 from complications of COVID-19. More than 150 people contributed $97,000 to support the renovation, renaming and relocation of the office. 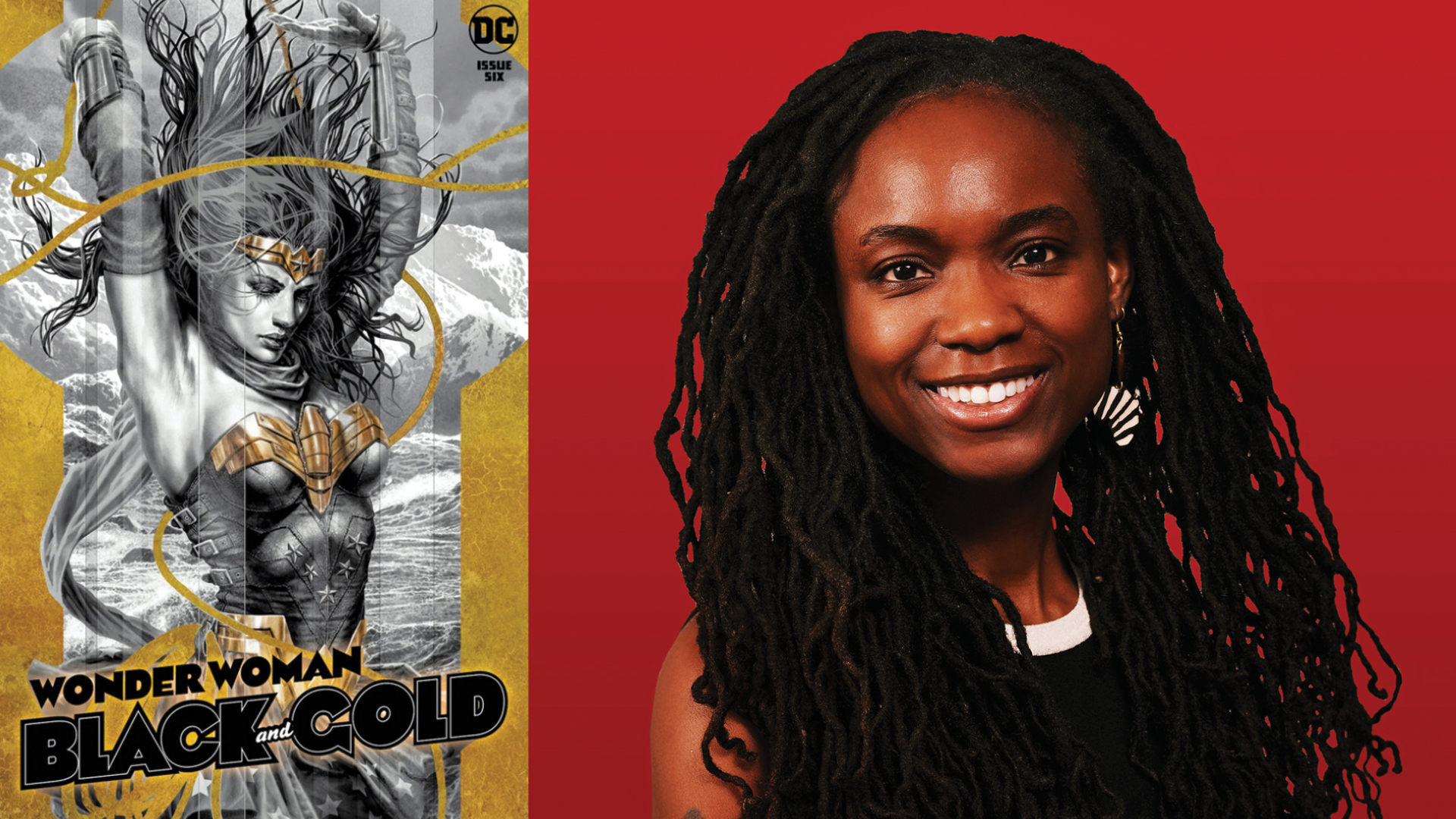 A story by Dr. Sheena Howard, a professor in the Department of Communication, Journalism and Media, appeared in Wonder Woman Black & Gold #6, the final installation of a new anthology series that marks the superhero’s 80th anniversary. DC Comics released the comic last November. Set in Center City, Philadelphia, against the backdrop of an environmental disaster, the tale features Wonder Woman relying on her sister, Nubia, to rescue her from the hands of Poseidon and Athena.

“There’s still a lot to do with Wonder Woman because her story is very flexible,” Howard says. “All of the gender dynamics she stands for, there’s a lot to play with there — and you can especially play with those dynamics as they change in society.”

A scholar of Black comics, Howard has increasingly ventured into the creation of comics. Previously, she was the co-writer of Superb, one of the first comics to ever feature a superhero with Down syndrome. 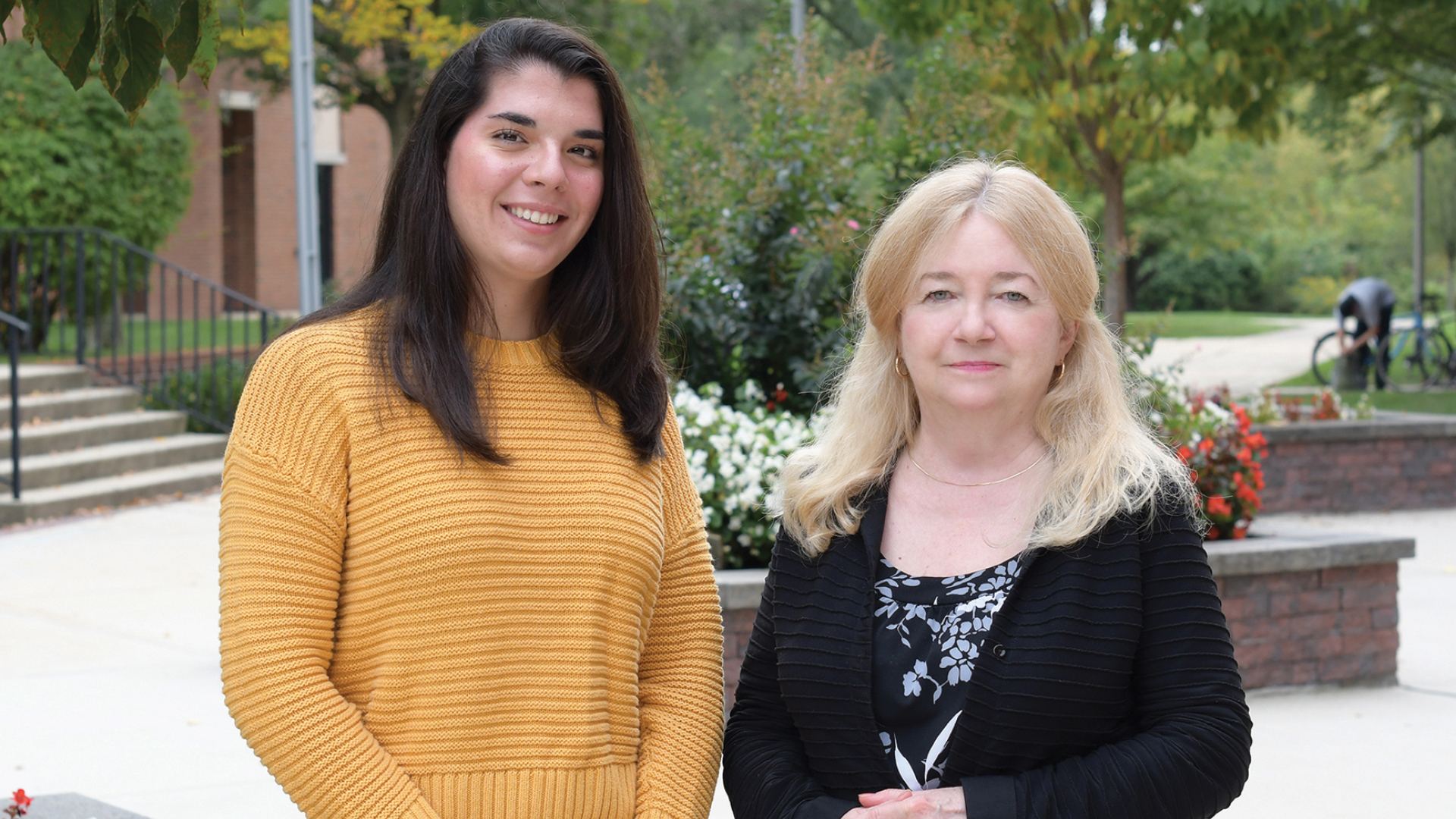 As the news of Nobel Prizes rolled out last October, some Rider students were already looking forward to next year’s announcements. That’s because they played a role in selecting a nominee for the 2022 Nobel Peace Prize winner.

The opportunity to nominate an individual or organization began with a new class on the Nobel Peace Prize. It was offered for the first time last spring through Rider’s global studies program. In addition to learning about the history and purpose of the prize, students were tasked with persuading their classmates who deserved to be the latest recipient of the famous award.

Their choice was submitted through an official nomination from an eligible Nobel Peace Prize nominator. “Honestly, I still cannot believe it — I never thought from a college course we could do something like this,” says Paola Carlesso, a sophomore double majoring in global studies and Spanish. Standing next to her is Dr. Roberta Fiske-Rusciano, who taught the course.