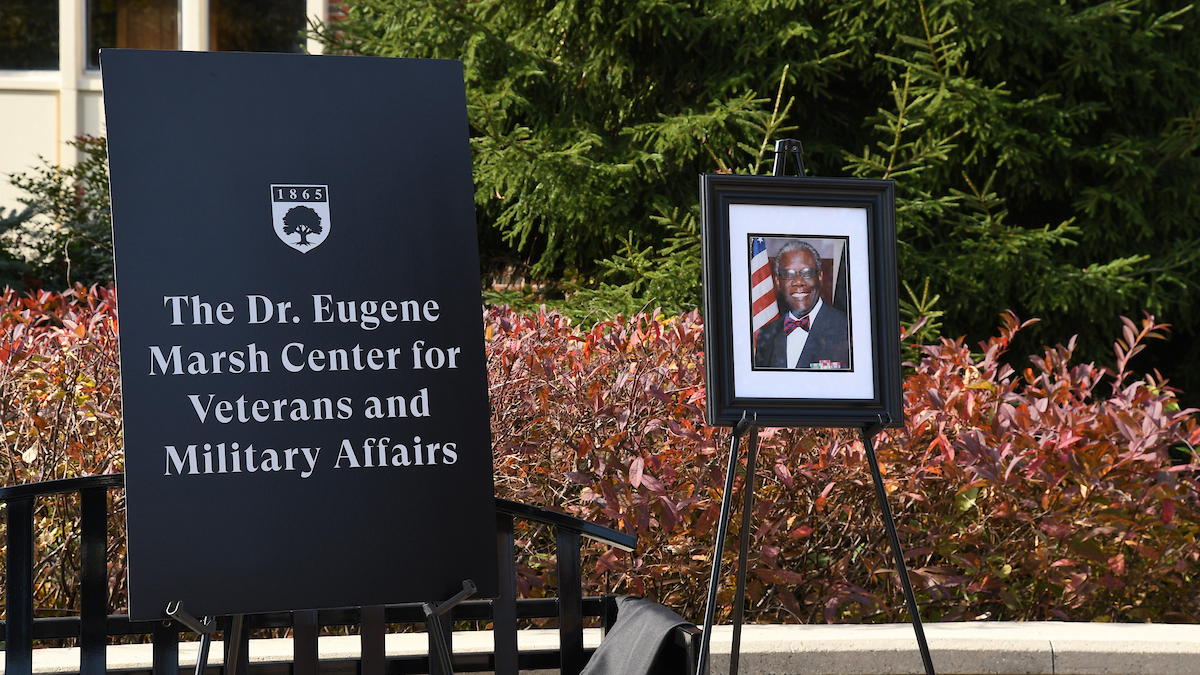 Rider University dedicated the campus’ veterans affairs office on Nov. 11 for Dr. Eugene Marsh ’13, ’18, ’21, a passionate student, war hero and dedicated veterans’ advocate whose moving personal journey inspired widespread admiration. Marsh died in January from complications of COVID-19. The Dr. Eugene Marsh Center for Veterans and Military Affairs is the first space at the University to be named for a Black alumnus.

More than 150 of Marsh’s family and friends raised $97,000 toward their goal of $100,000 to renovate and rename the office, and to relocate it from the back of campus to its new and more centrally located home in Rider’s student center, the Bart Luedeke Center. The dedication coincided with the University’s annual Veteran’s Day ceremony as the committee was confident its fundraising goal would be imminently achieved.

During the ceremony, which was live streamed, a proclamation recognizing Marsh's many achievements was presented to his widow, Elaine Walker Marsh, from the office of U.S. Rep. Bonnie Watson Coleman.

Marsh, a decorated veteran who earned three medals during his tour of Vietnam, including the Bronze Star for Valor in combat and the Army Commendation Medal, was known as a tireless advocate for veterans. He devoted much of his later life to protecting their rights, and also worked to advance access to healthcare in underrepresented communities.

“We are grateful to the more than 150 generous individuals who joined together to raise funds to ensure Eugene Marsh’s legacy lives on at Rider,” says Rider President Gregory G. Dell’Omo, Ph.D. “He was a much beloved student and alumnus and a true inspiration to all of us.”

In the face of a childhood marked by poverty and racism, Marsh consistently showed fortitude and determination. He was raised by a loving foster mother in South Carolina, who, while illiterate, placed a high importance on education. He was among the first Black students to integrate his all-white high school and entered the military after graduation, feeling that other avenues were closed to him.

Upon his return from Vietnam, Marsh again felt the sting of discrimination. He was unable to secure employment and became homeless for three years. Eventually he overcame joblessness and homelessness to establish his own construction company, helping to restore the Statue of Liberty and earning an invitation to the White House.

Despite finding this personal success, he never gave up his dream of attaining an education. He completed an associate’s degree at Mercer County Community College before transferring to Rider and attaining his bachelor’s degree in Liberal Arts with a concentration in history. Nearing his 70s, he earned his master’s degree in clinical mental health counseling at Rider, and at the time of his death at age 71, he was working on his doctoral dissertation in educational leadership.

For his dissertation, he was researching how student-veterans could be better supported in making informed decisions about their major of study and career goals at the outset of their education. Rider’s Board of Trustees awarded his doctorate posthumously in May.

In recognition of his consistent dedication to veterans’ needs, Marsh was appointed in January to the Department of Veterans Affairs Central Institutional Review Board, an opportunity to oversee the protections afforded to veterans involved in research studies. But he died shortly after being named to the board.

As news of his death spread, he received tributes from New Jersey’s governor, Phil Murphy, and the PBS Newshour.

“Eugene will always be in our hearts, and it is so wonderful that past, current, and future members of Rider University will have a constant reminder of the beautiful soul that once graced our campus," says Dr. DonnaJean Fredeen, provost and vice president for Academic Affairs. "The generosity of those who donated to the naming of the Center is testament to Eugene's impact on the Rider community as well as the surrounding community.”

Rider has a long history of support for veterans who are studying at the University. Among Rider’s first students were veterans of the Civil War seeking job skills to succeed in a rapidly changing national economy. Currently on campus, Rider has 147 military-connected students, 43 of whom are veterans.

Campus services are available for veterans, military and veterans' dependents and include applying for educational benefits, support in the transition to college, and certifying school attendance to the regional VA office.