Rider featured among 'spectacular radio studios' in U.S. and Canada 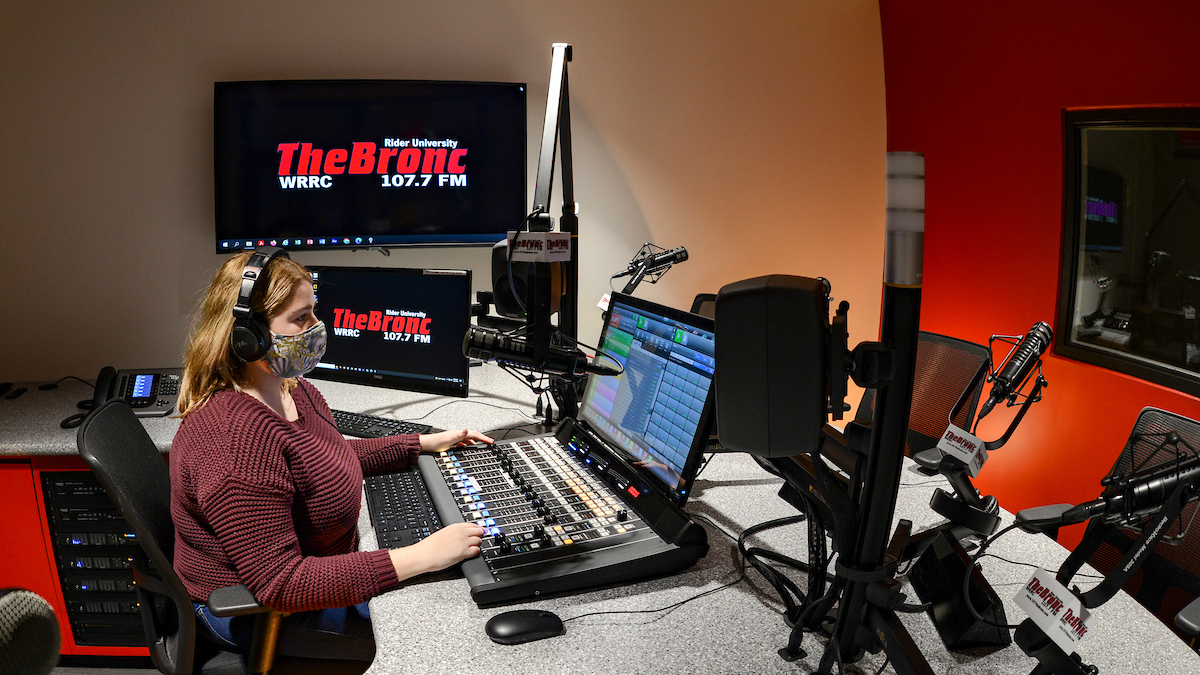 Rider University's recently renovated radio station was featured in Radio World's e-book Spectacular Radio Studios. Rider was one of 15 stations throughout the U.S. and Canada featured and one of only three colleges and universities included.

The e-book focused on outstanding, recent studio projects. Home to Rider's student-run 107.7 The Bronc FM and 107.7 The Bronc Retro, the station relocated from the Bart Luedeke Center to the Fine Arts Center in 2020. The same year, the station received a $25,000 grant from The Jules L. Plangere, Jr. Family Foundation, Inc. to partially fund all-new audio equipment.

"Radio World is the top industry publication," says John Mozes, The Bronc’s general manager. "It is an incredible honor to be highlighted among the best in the world and as a 21st century learning space for current and prospective students."

The new space features three multipurpose broadcast/production studios with floor to ceiling soundproof glass. In addition to brand-new, state-of-the-art audio equipment, the station also  installed WideOrbit Automation for Radio and MusicMaster music scheduling software. These new programs allowed for the addition of a second, internet-only radio station, 107.7 The Bronc Retro/WRRC2, which the students have programmed to play classic hits of the '50s, '60s, '70s, '80s and '90s. Both stations can also be heard via Apple, Google Play and Amazon Alexa.

All three studios and the 15 computers that operate the radio station 24/7 can be accessed through AnyDesk, a free remote desktop application. This new feature allows students to have the same ability to voice track, edit and produce at home, as they do at Rider.

“Since 107.7 The Bronc is a student organization and our student volunteers come to the station from a wide array of majors and minors as well as very different technical backgrounds, we wanted to ensure the new studios were easy to use," Mozes says in the article.

107.7 The Bronc is regularly recognized as one of the highest-ranking college radio stations in the state and the nation. Most recently, the stations were nominated for six Intercollegiate Broadcast System Media Awards. In 2019 and 2021, the station was nominated for a National Association of Broadcasters Marconi Radio Award for College Radio Station of the Year, a top recognition in the industry. In 2015, the Princeton Review ranked The Bronc as the 15th best college radio station in the U.S. In 2015, 2016 and 2017, The Bronc was awarded “Best College Radio Station” by the New Jersey Broadcasters Association.

The radio station also hosts a number of highly anticipated campus traditions, including Scream Screen, a drive-in movie and trunk-or-treat experience, the Eggscellent Egg Hunt, a classic egg hunt on a grand scale, and Cruisin’ From Commencement, which allows one member of the graduating class to win a new car.