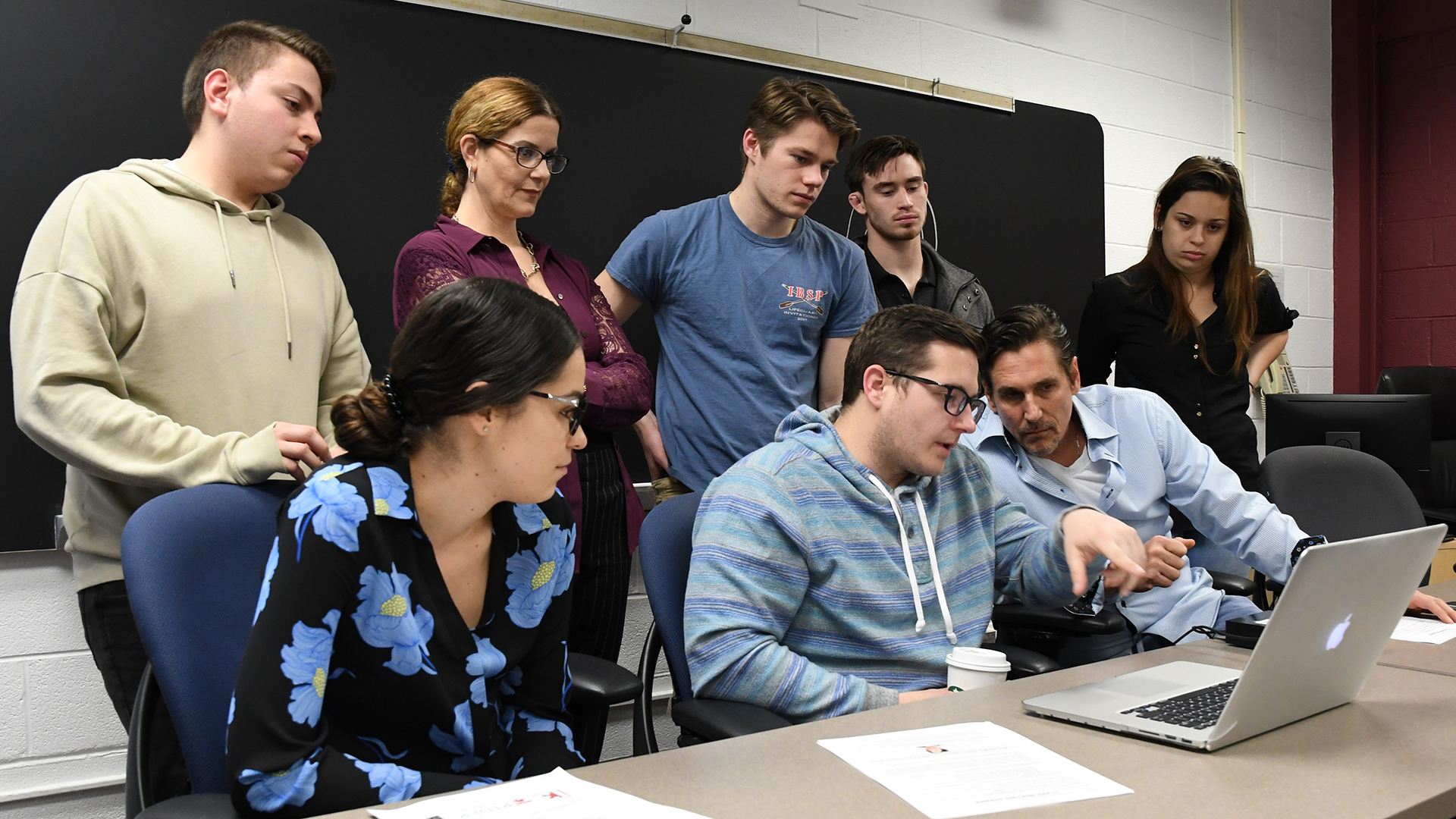 Just a few weeks into her Publicity Methods class, senior Joanna Lombardi found herself very outside of her comfort zone. The marketing major and event planning minor was directing the crew of the documentary 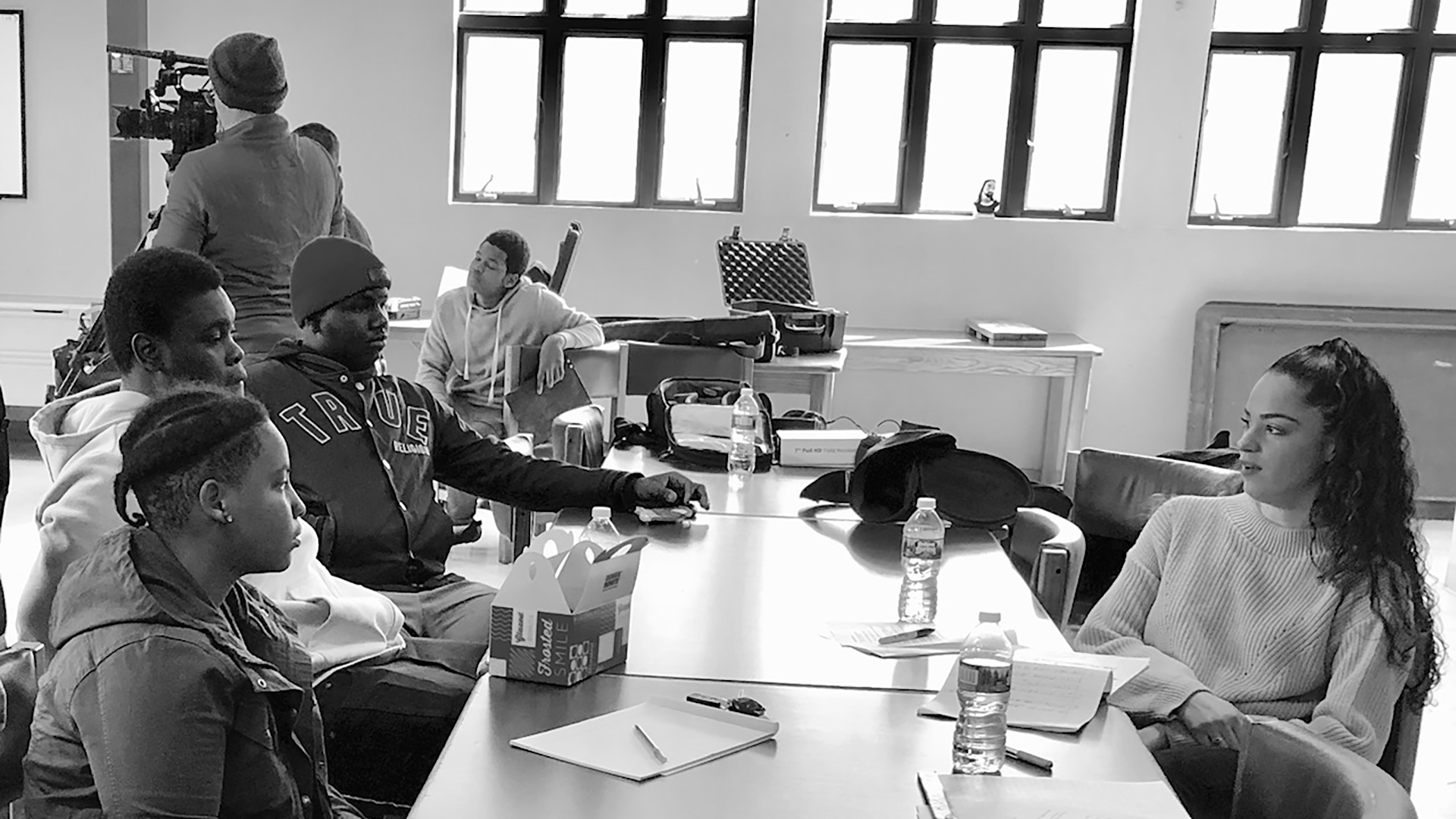 series Generation Change to get the exact footage she needed to finish editing the film's promotional video.

"Joseph Halsey [the director] gave me so much control and was willing to do anything to make sure I got the content I needed and thought was important," Lombardi says. "I learned so much that day. It was a priceless experience that I was beyond lucky to have been a part of."

Lombardi is one of the 16 students in Adjunct Professor Kathy Magrino's class working with the production company Seven13films to help promote a screening of the documentary series Generation Change at Rider on April 19.

Magrino had the students split themselves into three teams: video production, social media and event planning. Each team has been responsible for all promotion related to their area. With guidance from Rider alumna Margaret Fontana '97, owner of Margaret Fontana Media, which is overseeing Seven13films' publicity, students have taken control of Seven13films' social media channels, coordinated a full event plan for the screening event and storyboarded, filmed and edited a five-minute trailer for the documentary series.

Magrino says the partnership with a professional production company and marketing agency affords the students an inimitable experience. "Every semester I teach this class, I always want the students to have a unique experience where they can take something real away from it and even have things they can put on their resumes," she says.

Generation Change focuses on Trenton, N.J., youth's perception of society and what changes they would like to see in their world. They are guided by the question, "What would I do if I were mayor?" The documentary series features round-table discussions led by Good Morning America’s Adrienne Bankert with young adults from PEI Kids, a local child abuse prevention and intervention service that counsels and supports children during vulnerable times.

The class embodies the principles of the University's Engaged Learning Program by providing rich, real-world learning experiences. As a communications alumna, Fontana understands the strong impact an experiential learning project can have for students.

"This experience is 100 percent a crash course in everything media production and events," she says. "I know if I were to take a course all over again, this would be this course."

An idea that may give pause to some professionals, Halsey, the film's director, says becoming a client for college students has been an asset to his film's publicity.

"It's so enlightening to see the different perspective a younger generation can bring to a project," he says. "As we get older, I think we become more conforming rather than think outside the box. I find working with young people opens you up to a new thinking process."

The screening event will also include a town hall symposium with Trenton mayoral candidates and some of the subjects of Generation Change. Alicia Nieves of CBS 3's Eyewitness News will moderate the forum. They will discuss ways educators, city officials and local youth can work together to promote positive change in their local communities.

Senior public relations major Unique Jones has been working tirelessly to prepare for the screening as a member of the event planning team. Outside of the tactical skills she acquired to plan a large scale event, she says the experience also pushed her outside her comfort zone.

"One of the biggest things I've learned is to try things I wouldn't normally do to get the most out of this experience," she says. "Sometimes you have to dig a little deeper to get the results you want."

Halsey, who grew up in Trenton, is hopeful the documentary series and screening event will bring more attention to an area in dire straights, especially by bringing students from the Trenton area together with the mayoral candidates.

"Young adults are facilitating an event for young people that typically don’t get noticed. That is something special," he says.

The screening will take place on Thursday, April 19, at 6:30 p.m. in Rider's Theater in the Bart Luedeke Center. To RSVP, click here. For more information about the event, please call 212-714-4714 or email [email protected].