Waste Management (WM) handles all waste and recycling hauling on both the Lawrenceville and Princeton campuses. In September 2009, the Lawrenceville campus switched to single-stream recycling.  Single-stream is a system that allows Rider to place all their recyclables–such as fiber (newspaper, office paper and cardboard) and non-fiber (plastics #1-7, glass, and aluminum) into a single container for subsequent collection, processing, and remarketing.

In February 2010, Daly’s and Cranberry’s began recycling their food waste through an outside organics company which gave it a second life as fertilizer; however in 2014, a bio-digester was installed behind Daly’s which now takes all pre-service food waste and turns it into grey water. Collection containers to store used fryer grease are provided and retrieved by Waste Oil Recyclers Inc. to then be converted into biodiesel fuel.

TerraCycle Bath & Beauty brigade buckets can be found in all residence hall bathrooms, and several other locations on campus, including the library and BLC Commuter Lounge. Place your empty toiletry containers in the green containers to be sent to TerraCycle in Trenton for special recycling. To recycle e-waste, contact the Office to find out whether your items are accepted in our techno trash collection.

RecycleMania is an eight-week, nationwide recycling competition among college and university campuses. Hundreds of schools compete to increase recycling rates and reduce waste accumulation. Rider University has participated in this competition since 2009. In Rider’s second year competing, we increased our recycling rate by 295%. The competition generally runs from February -April with weekly recycling rate reporting and ranking. To help Rider get ahead in RecycleMania, you can recycle all aluminum, plastics numbered 1-7, cardboard, paper, and glass in appropriate marked containers. And as always, be sure to buy less and reuse items more often. 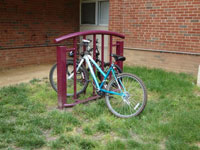 In an effort to promote environmentally friendly transportation, Rider has installed several bike racks on both campuses. These racks have been placed in convenient locations so that riders can safely park their bikes without worry. Due to increased usage in the spring 2011 semester, additional bike racks were installed the following fall.

Campus Sustainability Day 2009 was accompanied by the introduction of water bottle refill stations located around campus. Students, faculty & staff were able to receive free, cool, filtered water eliminating the need for single-use plastic water bottles. During subsequent years, additional water filtration units were installed in each academic building, the library, the SRC, the BLC, and many other buildings. They have since been upgraded from free standing Quench machines to built-in Elkay units at 44 locations on the Lawrenceville campus. By the end of the Spring 2018 semester, Elkay use on campus has collectively saved over 3.4 million bottles since installation.

In keeping with the President’s Climate Commitment and Rider’s push to become carbon neutral by 2050, Rider began purchasing Renewable Energy Credits (RECs) in 2007. These Clean Energy Credits means that over 65% of Rider’s energy use is purchased from a renewable source, in Rider’s case, wind energy. This renewable energy is all a part of Rider’s effort to become a more sustainable campus and community.

Over the 2009 summer break energy meters were installed in most of the buildings on the Lawrenceville and Westminster campuses. These energy meters provide, in real-time, the energy being consumed by each building during the day. They are meant to show when buildings are consuming exurbanite amounts of energy in order to find ways of reduction. They help to show which buildings are in need of improvement in order to be more environmentally friendly as well as demonstrate to students and staff the impact they have on the energy consumed throughout buildings on campus. The meters also measure the before and after energy use for a building upgrade project.  The energy meters can be viewed by anyone on campus by following the simple directions provided.

On the Princeton Campus, the Marion Buckelew Cullen Center and Hillman Performance Hall construction has achieved the LEED certification level of Silver.  This brings our total to three new LEED building projects that have been LEED certified by the US Green Building Council

In 2007, ground was broken for Beckett Village. According to Rider News, it was planned as part of The President’s Climate Commitment and has helped Rider step in the right direction with Green Building. All appliances in the halls are EnergyStar rated, buildings are super insulated and the concrete is made with recycled fly ash. With this LEED Silver certificate, 35% of Rider’s electricity is purchased through renewable energy credits. Low-flow water fixtures are also used in reducing waste, and environmentally friendly paints, carpets, and cork flooring are also in use to reduce the production impact of the hall. More than 20% of the construction materials were purchased locally and at least 75% of the waste was recycled. Trees in the site were taken out using horses instead of trucks and machinery. LEED, Leadership in Energy and Environmental Design, Certification means that the building meets a set of standards set by the United States Green Building Council.

Beginning in the spring of 2010, Rider began two new construction projects on the Lawrenceville campus; an addition to the BLC Theater and a new academic building, Lynch Adler Hall. The multi-million dollar projects were completed in the summer of 2011. The new 21,000 sq. ft. academic building features 9 new classrooms, two seminar rooms, a multipurpose conference room and 16 university offices. The 10,000 square foot BLC Theater addition allows seating for 350 people and is a fully functional teaching and production theater complete with a production stage, screen and prop shop, and 1,500 square foot dance and rehearsal studio. The BLC Theater expansion was built with low-emitting materials, energy-efficient HVAC equipment, a white roof for heat reflection and regional construction materials. Lynch Adler Hall features an innovative green design, including a green roof, and used sustainable building materials, earning it a LEED Certified Gold certification. All waste generated from both projects was recycled.

As part of Rider’s continued efforts to promote sustainability on campus several positions and educational forums have been introduced to educate Rider’s community about sustainability. Along with Rider’s “Green Film Series” which educates students, faculty, and staff about green causes promoted through film, Rider introduced a Sustainability Minor in the spring 2011 semester. This minor allows students with an interest in the environment to explore how sustainability can be applied to a variety of different disciplines and how it affects our world today. Freshman Seminar professors are provided with the option to have Eco-Reps visit their class and educate first year students about sustainability and Rider’s efforts to go green. The Student Government Association (SGA) has also created an Energy and Sustainability Chair as part of the president’s cabinet. A graduate assistant for sustainability has also been established in the Office of Sustainability to work with the Sustainability Manager and Eco-Reps to further create initiatives on Rider’s campus to benefit the environment.

Rider’s Green Acres is an organic garden established in June 2011. It is maintained by many volunteers and anyone who loves gardening is welcome to join our team! The garden is located between the Joseph P. Vona Center and Van Cleve House, near the main gate. Garden sponsors and supporters include the Energy and Sustainability Steering Committee, Student Affairs and Facilities Management at Rider University and Ortho-McNeil Jansseen.  Starting around mid-summer, there are produce give-away days held every Thursday from 12 p.m. until the available produce is given away. The garden offers a variety of herbs, including basil, thyme, rosemary, parsley, sage and cilantro, as well as fresh produce, including cabbage, eggplant, zucchini, cucumbers, tomatoes and peppers.

Rider University, along with PSE&G and Alteris Renewables installed a 740kW solar panel array in the back field of campus behind the softball field and visible from Interstate 95. The installation of the solar field was done in the most environmentally friendly way possible: no trees were removed, no wetlands disturbed, and the grass under the panels is shade tolerant.  Rider’s solar array is producing 920,000 kWh, or enough energy to power 92 homes, which is equivalent to: reducing CO2 emissions by 34,580,526lbs over the course of 25 years, planting 17,074 trees, taking 127.4 vehicles off the road each year, and eliminating the use of 74,902 gallons of gasoline each year. The solar field is a land lease through the PSE&G Solar4All program, meaning that the energy from the solar panels does not go directly to Rider; instead it is converted then goes into the grid.  Rider benefits indirectly from the production of renewable energy and generates revenue from the land lease to be used for sustainability initiatives on campus.

Rider’s new Tri-Generation Energy Plant was built in 2014 and went online just as the 2014-2015 academic year began.  The system uses natural gas to generate electricity as well as steam and chilled water.  You may be more familiar with the idea of cogeneration, or “co-gen”.  These plants use natural gas to generate electricity and steam.  Our plant will save the university money, since it will reduce the amount of electricity we must purchase from the grid and use energy that is usually wasted to heat and chill water for use in the academic buildings across campus.  The greenhouse gas emissions from the plant will be below that generated on our behalf off campus per unit of energy and will result in significantly reduced sulfur emissions.  The plant will provide object lessons in energy and sustainability for students in Physics, Environmental Science and Sustainability Studies.