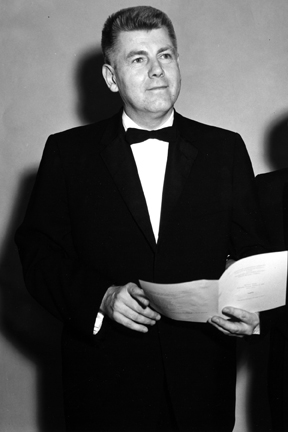 Warren Brownell Martin was born in 1916 on a farm near Galeton in north central Pennsylvania. As a child he played the piano and violin and began composing. He once said that by age seven he realized that music would be the most important thing in his life.

Matriculating at Westminster Choir College at age 15, he was a student there until 1938, earning his Bachelor and Master of Music degrees. His major teachers included Paul Boepple, Roy Harris, David Hugh Jones, and Carl Weinrich. He was a member of the bass section of Westminster Choir for its 1934 Russian tour. As a student he was organist at several churches, principally the First Presbyterian Church of Trenton.

After graduation he became organist of the First Congregational Church of Los Angeles, at that time the largest church of its denomination. During World War II he served in the United States Army, seeing active duty in France. After the war he returned to the Los Angeles church as Minister of Music, becoming one of the most sought-after organ recitalists on the West Coast. In 1948 he became Director of Music at Rockefeller Memorial Chapel of the University of Chicago.

In 1950 he returned to Princeton to join the Westminster faculty, where he served until his final illness in December 1981. In his long and versatile career, he served variously as Head of the Graduate Department, Musical Director, conductor of Symphonic and Westminster Choir, Head of the Theory Department, and outstanding teacher of an extraordinary variety of music subjects to countless Westminster students. Beyond his regular teaching he functioned actively as an exacting and insightful musical coach and accompanist to numerous students as well as colleagues.

Dr. Williamson, founder of the College, called him “a near genius.”

He called himself “a jack of all musical trades.” Although his choral arrangement of “Great Day” is probably his most performed composition, he himself considered “Stabat Mater” his best piece. He was a man of complete and uncompromising integrity musically, intellectually, and personally. Composer, conductor, organist, pianist, coach, teacher, he would wish to be called: “Warren Martin, musician."

From the program for the Memorial Service and Concert, 14 November 1982.