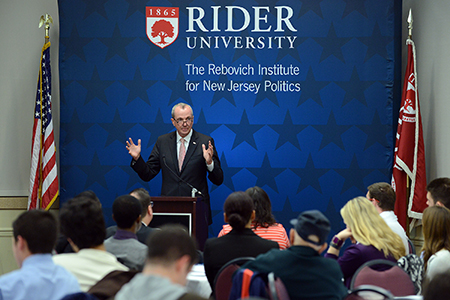 The Rebovich Institute for New Jersey Politics is dedicated to public service and scholarly analysis of government, public policy, campaigns and elections in New Jersey. It offers a series of campus events featuring the state’s leaders, facilitates political internships, and runs the Rebovich Fellowship Program.

Founded in 2001 by Professor David Rebovich (1949-2007), the Institute is a dynamic and creative home where students can network, study and gain practical experience in New Jersey politics.

By working with the next generation of political professionals, leaders and civic-minded citizens, the Institute provides the opportunity to form connections, launch careers, and decide how they will approach and improve upon our politics.

Micah Rasmussen is the director of the Rebovich Institute for New Jersey Politics. He has contributed to the public affairs of the state for more than two decades and has more than 15 years of experience as an adjunct professor of political science.

Most recently, Rasmussen served as vice president for executive communications at Chubb, where he wrote speeches for audiences throughout the world. He previously served as director of corporate communications for New Jersey Resources and its primary subsidiary, New Jersey Natural Gas. He led the crisis communications that kept affected customers, public officials and the media informed throughout widespread system damages in the wake of Superstorm Sandy.

During his undergraduate studies at Rider, Dr. Rebovich was his professor and mentor. He earned his Master of Arts in Political Science from the Eagleton Institute of Politics at Rutgers University.

Rasmussen runs the New Jersey Model Congress, a civics education program he founded. He lives with his wife and three daughters in Upper Freehold Township, where he advocates for the preservation of farmland and open space.