A video of the incident was shared widely 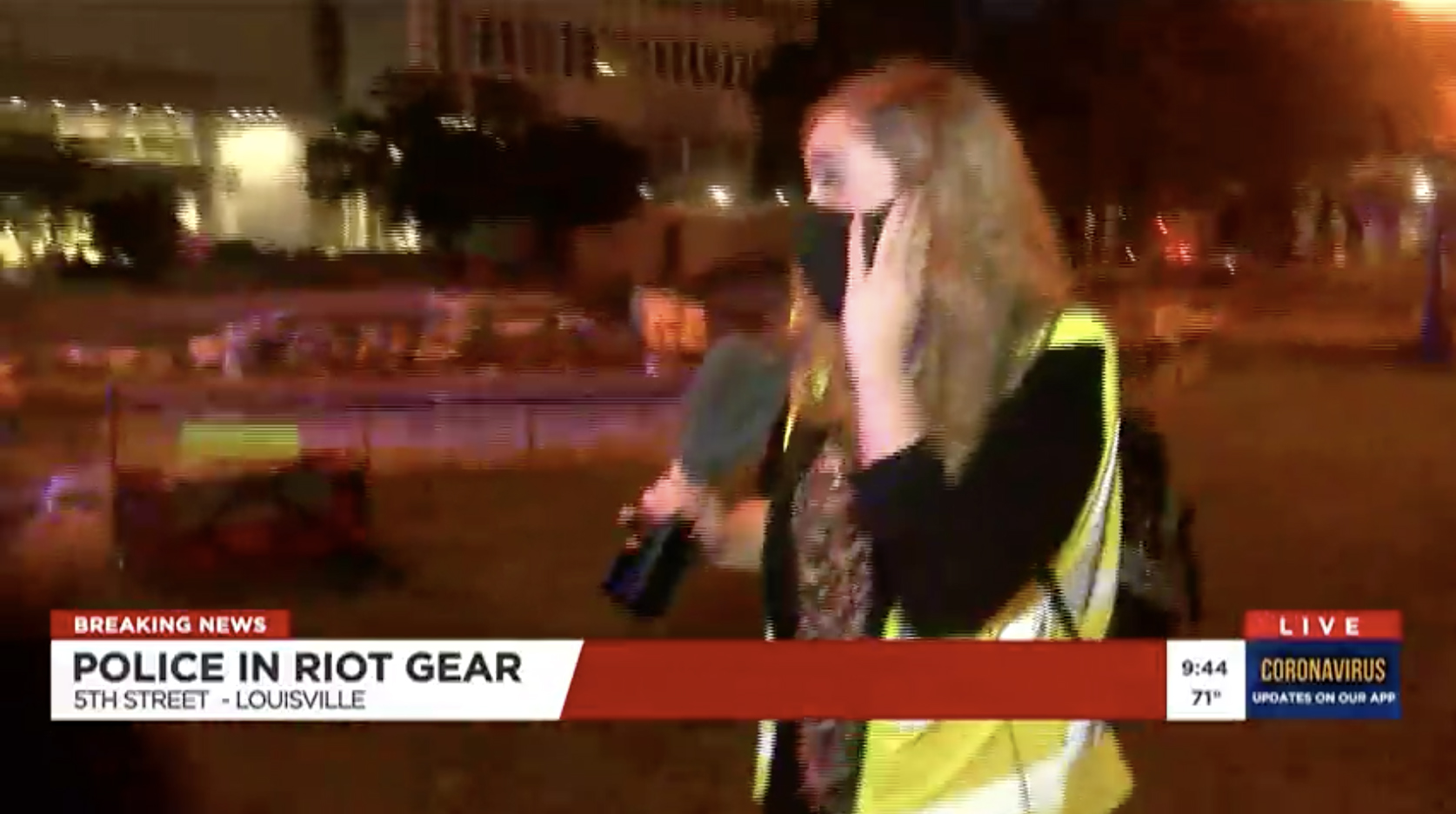 It was a shocking moment caught on video, one that immediately lit up Twitter as journalists and others shared it with indignation. An officer on live TV had pointed a gun at a news crew and fired.

Although the officer was firing pepper balls, a non-lethal projectile, and not live ammunition, the reporter, Kaitlin Rust ’16, clad in black mask and reflective vest, was visibly shaken before regaining her composure and continuing the broadcast.

Rust was a digital media major at Rider who now works as a multimedia journalist and reporter for WAVE 3, an NBC-affiliated television station.

A pepper ball struck Rust's shin, leaving a bruise and welt, according to her recounting of the experience published on WAVE 3’s website.

The incident took place on May 29, the second night of protests in downtown Louisville following the killing of Breonna Taylor, a 26-year-old African-American emergency room technician, by the police. Her death and other recent, similar incidents, such as the death of George Floyd in Minneapolis, Minn., have roiled the nation and caused widespread protests and condemnation.

Rust says being fired upon gave her a greater understanding of the protests.

“I realized what shook me the most is that, for my entire life, I’ve been taught it isn’t supposed to work this way,” she wrote. “As long as we follow the law, police officers will keep us safe. I know and trust many good people who wear the badge. However, when I saw a police officer look me in the eyes and intentionally hurt me — for no reason, and without fear of any consequences — it shook me hard and gave me better understanding. This is what the protests are all about.”

In her recounting, she was careful not to equate her isolated experience with the broader experiences that are generating the protests. “The betrayal I felt for just one second is a mere fraction of what many people live with their entire lives,” she wrote. “It was a terrible and empty feeling, and the black community around me feel it far more deeply than I ever will.”

What prompted the officer to fire at the journalists? Rust says she was complying with police instructions.

Among the press, Rust is far from alone in being targeted during the protests. On June 8, the U.S. Press Freedom Tracker reported that according to its data more than 383 recent incidents involving attacks on press freedom were being investigated. The Tracker catalogs information on the number of press freedom violations in the United States.

In a statement following the incident, Louisville Metro Police Department spokeswoman Jessie Halladay said, “Targeting the media is not our intention. There was a lot going on last night, and to be fair to both the officer and to Kaitlin, we need to take a deeper look at what happened and what prompted that action. So we have said that we will do that and if there needs to be discipline we will address it.”

At Rider, Rust was involved with the student-managed TV station called Rider University Network, or R.U.N. She was a junior reporter for WXTF Fox 29 in Philadelphia as an undergraduate and received the Service Award from the Department of Communication, Journalism, and Media. Also as an undergraduate, she received a grant that helped fund the creation of a documentary on an epidemic of neglected dogs in Puerto Rico. Following graduation, she joined KPLC in Louisiana as a reporter. She has been with the WAVE 3 News team since May 2018.

Rust’s recent experience has only deepened her commitment to journalism, she says.

This experience has made me more committed than ever to tell that story,” she wrote. “Like all journalists, I’ll keep giving a voice to anyone who’s demanding justice, and to those who are trying to help them. We’ll keep shining a light on all parts of that struggle, even if powerful people prefer the dark."