Marsh overcame homelessness and other struggles to achieve success and purpose 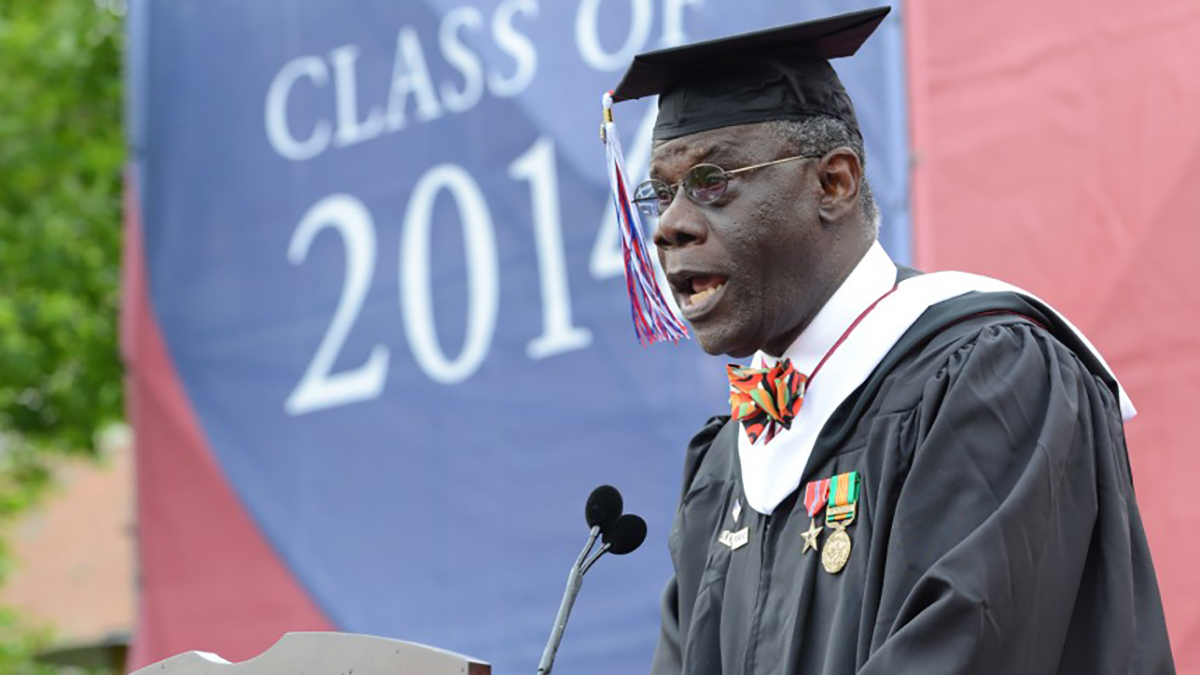 Eugene Marsh ’13, ’18, whose relentless late-in-life quest for education earned him seemingly universal admiration from the Rider University community, died on Jan. 29. He was 71. The cause was complications from COVID-19.

At the time of his death, Marsh was enrolled in Rider’s Doctor of Educational Leadership program. He had previously earned a bachelor’s in liberal studies and a master’s in clinical mental health counseling, both from Rider.

Marsh grew up in South Carolina in the 1950s during an era of segregation. He was raised in a foster family, one of 13 children. His mother, who would instill the foundational values Marsh drew upon and inspire his educational dreams, was illiterate.

He was among the first African American students to integrate his all-white high school. After high school, Marsh enlisted in the U.S. Army and served with the 101st Airborne Division during the Vietnam War. As a soldier, he earned the Bronze Star for Valor in combat, the U.S. Army Medal and the Vietnam Veteran Medal.

In a 2014 interview, Marsh recalled what it was like returning to the U.S. as veteran in 1970. “My dignity as an African American and as a soldier was denied because of continued racism, discrimination and political controversy over the war,” he said.

Marsh was unable to secure employment and eventually became homeless for about three years.

He eventually enrolled as an undergraduate at the University of South Carolina, but left before completing his degree to pursue a full-time job with the Duke Power Company in Charlotte, N.C. It was the start of a career in construction. In 1998, Marsh founded his own firm in New Jersey, Construction Project Management Services, Inc. The company's projects include renovations to the Statue of Liberty in 2009.

Despite finding professional success, Marsh never gave up on his dream of attaining an education. He enrolled in Mercer County Community College and earned an associate degree in 2010 before transferring to Rider, where his dreams and ambition continued to grow with every accomplishment.

Marsh was selected as the speaker for Rider’s 2014 Commencement ceremony. His speech, which recalled his journey to becoming the first college graduate in his family, moved some in the audience to tears.

Marsh wanted to use his education not simply as a means of personal fulfillment but as a tool to help other people. He was particularly focused on mentoring and counseling veterans and Black people.

He served as a member of the Veterans’ Community Advisory Board in Philadelphia and as the second vice president of the NY chapter of 100 Black Men of America, Inc. Earlier this year, he was appointed to the Department of Veterans Affairs Central Institutional Review Board, which provides opportunities for military veterans to participate in research studies and ensures they are afforded adequate protections.

“I want to help people fulfill their dreams and look beyond the barriers that may be preventing them from accomplishing their goals,” Marsh said in 2019. “If I can do it, anybody can do it.”

Viewing/Visitation will be on Thursday, Feb. 11, at the Lighthouse Outreach Ministry,715 Bellevue Avenue, Trenton, NJ 08618 from 10 a.m. to 11 p.m. and a funeral service will be held from 11 a.m. to noon. If you would like to attend virtually or in-person, please contact Michelle Peal at [email protected] in advance.