The Bronc, The Bronc Retro receive second most nominations of any college or university in New Jersey 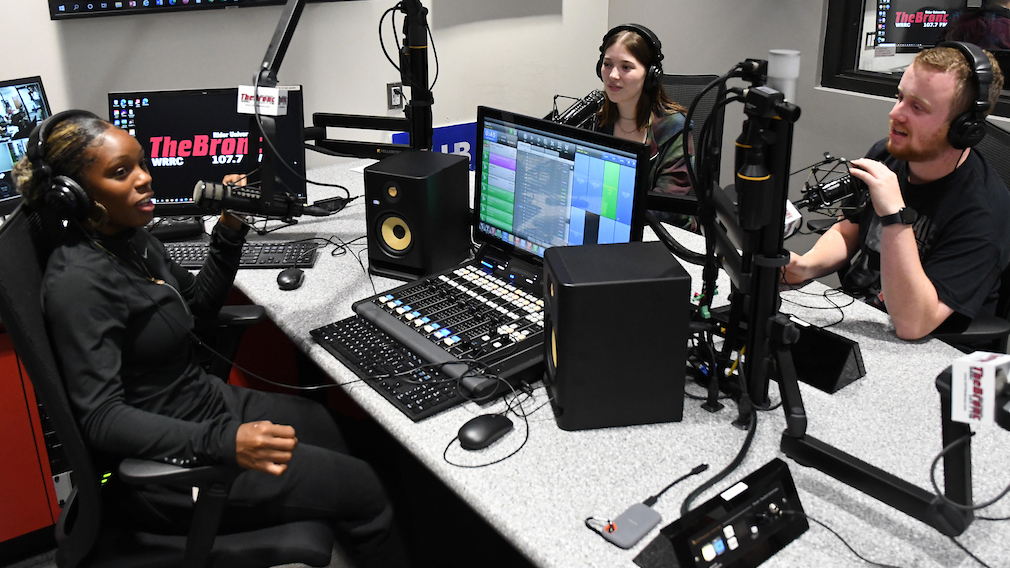 Rider University’s 107.7 The Bronc WRRC-FM and its online-only counterpart 107.7 The Bronc Retro WRRC2 have been nominated for eight Intercollegiate Broadcasting System Media Awards. The awards recognize outstanding programming from college and university radio stations throughout the U.S.

The exclusively student-run stations are consistently recognized as some of the best in the nation, with 107.7 The Bronc being nominated for the National Association of Broadcasters Marconi Award for College Radio Station of the Year in 2019, 2021 and 2022. Last year, 107.7 The Bronc earned three National Electronic Media Association Awards and 107.7 The Bronc Retro was the winner for Best Sports Update for The Overtime in the 2022 Intercollegiate Broadcasting System Media Awards.

“The engaged learning opportunities we are consistently able to provide help the over 60 students involved at The Bronc perfect their craft,” says John Mozes, general manager. “Their passion and energy for both our FM and Retro radio station is contagious. It’s extremely rewarding to see our students recognized nationally for their hard work and commitment.”

Witkowski, co-production director for 107.7 The Bronc, says making the submission reel for the Best College Radio Station award was one of the hardest things he’s ever done. “It was like putting together a highlight reel of my family. How can you pick highlights when you think everything they do is great?”

Winners will be announced on Feb. 25 during the 2023 Intercollegiate Broadcasting Conference at the Sheraton New York Times Square Hotel. The conference provides attendees an opportunity to learn about and exchange ideas in the field of broadcasting through featured guest speakers and informational sessions. Prior to the ceremony, Mozes and staff will be holding a panel discussion as part of the event’s Marconi Spotlight Series in which Marconi Award-nominated stations answer audience questions and reflect on their year in broadcasting.

In addition to their stellar radio programming, the stations produce some of Rider’s most popular events such as Scream Screen, a drive-in movie and trunk-or-treat experience, and the Eggscellent Egg Hunt, a classic egg hunt with a $1,000 grand prize. Another student favorite is Cruisin’ From Commencement, the stations’ yearly competition where members of the graduating class have the opportunity to win a new car.

Listen to 107.7 The Bronc live on the airwaves or tune in to both stations online, via Apple, Google Play and Audacy apps, and with Amazon Alexa.