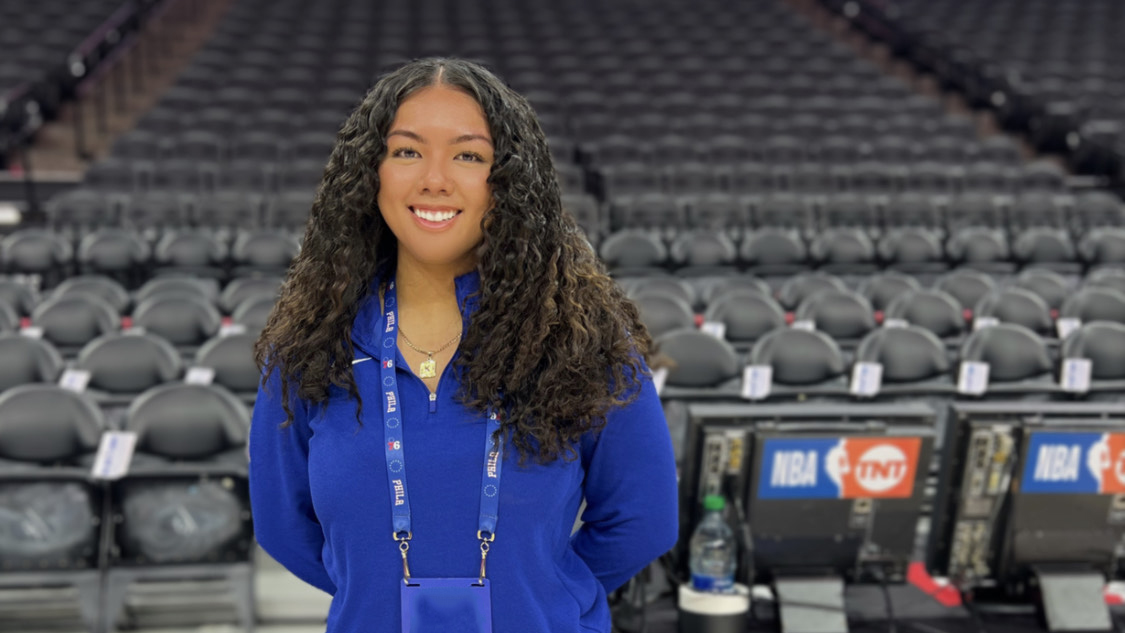 Kaela Chrizele Canlas is a Rider University senior majoring in public relations with a minor in sports media. And as of this past September, she is also a proud member of the Philadelphia 76ers public relations team.

Canlas always knew she wanted to work in professional sports, but it wasn’t until she attended a 76ers Military Night game with her younger sister that she knew in exactly what capacity. She was captivated not just by the team, but by the work of the public relations team on and off the court during the game. “I’m a huge basketball fan and that night, seeing it all up close, that’s when it clicked,” says Canlas. “I left that game determined to work for them.”

At the time, Canlas had been working with the Philadelphia Eagles as part of the team’s game-day operations staff for their pre-season and training camp, but decided to transition to a volunteer position with the Delaware Blue Coats, the 76ers’ G League team, in the hopes that it would provide better networking opportunities. Her instinct was right and her determination paid off. A few months later, a position with the 76ers opened up and Canlas was ready for it.

Canlas was offered the position of public relations and communications staff member this past fall, just before the start of her senior year. She has been balancing the full-time job and her school work ever since.

“Juggling school and work has certainly been difficult, but my PR team at work and my professors have been so supportive,” says Canlas.

As a member of the PR staff, Canlas spends her time handling a variety of media and communications for the team. On game nights, she can be found collaborating with her coworkers on tasks such as writing game notes, transcribing press conferences and running team stats for covering media outlets such as ESPN, TNT and NBA TV. “The late night hours have been hard,” says Canlas, “but it’s worth it. Being able to help with and be a part of a process that I once just watched from home is one of the best things about my job.”

As the only woman on her team, Canlas notes that it has been an “interesting experience,” but that she doesn’t let it deter her. “It just pushes me to do more and be the best I can be in order to stand out through my work ethic and the new perspectives I can offer our team.”

Canlas attributes her early success to her Rider education, particularly her classes in public relations and her involvement in the Public Relations Student Society of America (PRSSA). “Dr. [Nancy] Wiencek, who has been my PR professor, PRSSA adviser and academic adviser, and professor Charles Ray from my sports law class really helped me get to this point,” says Canlas. “I can’t thank them and my fellow PRSSA classmates enough.”

After earning her bachelor’s degree in public relations in 2023, Canlas plans on continuing to work her way up the sports PR industry and seeing where her position with the 76ers will take her. She hopes to be able to give back somehow and help other students like herself to be successful in the industry.

“It’s important to know that there are always people rooting for you even when you don’t know it or see it,” she says. “My professors and fellow classmates have helped me tremendously. I want to find a way to do the same.”