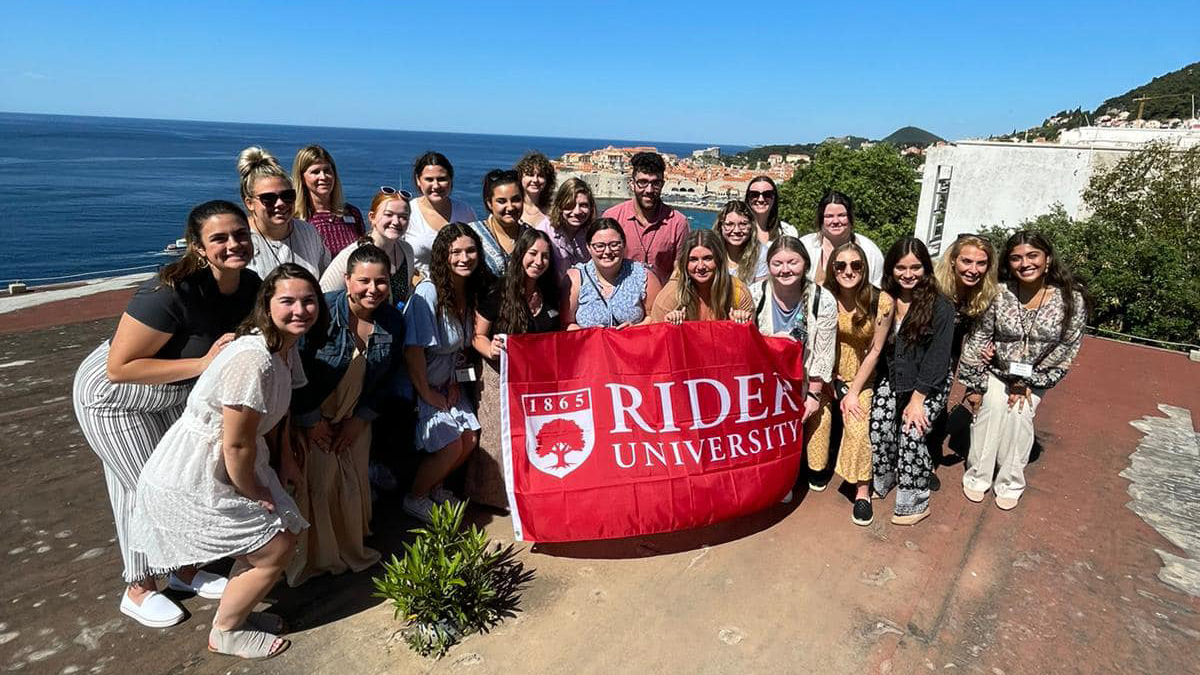 For the first time since 2019, students in Rider University’s Department of Teacher Education had the opportunity to participate in study abroad experiences.

A trip to Croatia took place from May 15 through 24 and was led by Drs. Diane Casale-Giannola and Sharon McKool, while a trip to Denmark and Sweden ran from May 16 to 26 and was led by Dr. Mark Pearcy and Erica Spence-Umstead, the director of field placement at Rider.

Pearcy says the purpose of these trips is to “explore other nations' educational systems, pedagogical practices and principles, especially in comparison to the United States. An additional goal is to help our students experience the personal and professional growth that comes with travel abroad and exposure to different cultures, norms and beliefs.”

Students participating in the Croatia trip visited five schools, where they took part in guest lectures on the history and culture of the country, observed teacher education preparation and learned about current issues in education.

The itinerary included five nights in Dubrovnik. During their time there, the group took a walking tour of the city with stops at Dubrovnik’s cathedral, palace and monastery.

The students also visited Lokrum Island off the coast of Dubrovnik, spent two nights in the port city of Split, and two nights in Plitvice Lakes National Park, a UNESCO World Heritage site and one of Croatia's oldest and largest parks.

The Denmark and Sweden trip began in Copenhagen, where the group spent five nights before traveling by train to Stockholm. The students visited secondary and elementary schools, where they had the opportunity to meet and converse with teens, who all spoke fluent English. They also participated in guest lectures and field study events, and took walking tours of both cities.

Sightseeing highlights included a visit to a coastal nature center where the students searched for marine life, a boat tour of the Swedish archipelago and multiple museum visits, including the Viking Museum and the Vasa Museum in Stockholm, which houses a fully preserved 17th-century ship.

“Denmark and Sweden both have excellent educational systems, with a deep and collective sense of responsibility for student welfare,” says Pearcy. “The commitment in both countries to develop and maintain comprehensive social institutions such as health care, education and civic life is really impressive.”

He was particularly struck by the commitment in both nations to early childhood play-based and nature-based education, as well as the Swedish concept of "lagom," which literally means "just right" and represents the idea of taking a balanced approach to life and not being too greedy, selfish or self-involved.

This year’s trips were especially noteworthy because they were the first ones held since the outbreak of the COVID-19 pandemic. In addition to this marking a resumption of activities people have had to put on hold — “I felt very grateful for the opportunity to travel again,” says Pearcy — it also provided a chance to study the different approaches countries took to address COVID.

“Denmark had one of the most effective systems of public monitoring, while Sweden basically encouraged citizens who were ill to quarantine themselves and be responsible, without a national emphasis on masking or social distancing,” Pearcy observes. “Both approaches seemed to work, given both populations' commitment to collective responsibility.”

These study abroad trips for future teachers are particularly meaningful to Casale-Giannola, who co-founded the program and has previously led excursions to countries including Spain, Austria, Italy, England, Germany and Ireland.

“I did my dissertation on the meaning of international educational experiences, and then ultimately I paid that forward,” she says.

She believes the most valuable part of the study abroad program is the perspective that the students gain. “Whatever they consider to be ‘typical’ or ‘normal’ or ‘what should happen,’ changes when they learn to look at things from another lens,” she says. “They find the experience to be very life changing. They never view something from the same place ever again.”

Plans are already in the works for a 2023 trip, which is tentatively scheduled to visit Scotland and England. Students who are interested in learning more can contact Rider’s Office of International Education at [email protected].