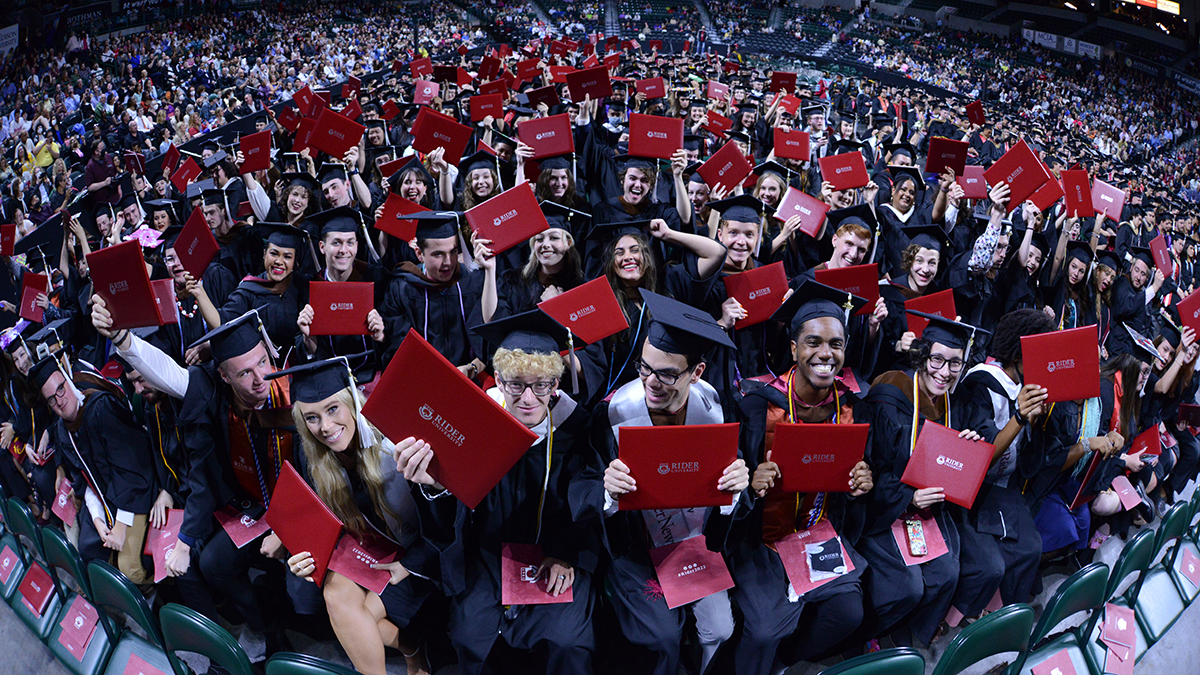 Rider University’s annual undergraduate Commencement ceremony returned to Cure Insurance Arena in Trenton on May 14 as 775 students were honored for earning their bachelor’s degrees.

In her introductory remarks, Provost and Vice President of Academic Affairs DonnaJean A. Fredeen said that what graduates have earned at Rider — knowledge, skills, experiences and relationships — are lifetime assets.

“They will help you manage the opportunities and challenges we all encounter and offer you the confidence to lead creative, responsible and gainfully employed lives – lives of limitless possibility,” she said.

Rider President Gregory G. Dell’Omo, Ph.D., who did not attend the ceremony because he recently tested positive for COVID-19, recorded a message for the graduating class. "I'm sure today will be only the first of many proud and successful moments in your life," he told the graduates.

Entrepreneur Paul Muller received an honorary Doctor of Business. The owner of Team Toyota of Langhorne, Princeton and Glen Mills and the president of the Tri-State Toyota Dealers Association, he started his first dealership in Lawrenceville in 1983 and has purchased, opened and sold nine other dealerships since then.

“It's the journey that counts, not just the beginning or the end. That's what tells the story,” said Muller, who studied political science at Rider before leaving after his first year for a three-year tour with the U.S. Army, including a year in Vietnam. Upon returning, he re-enrolled at Rider, and Paul and his wife, Beverly ’71, started a family while they were both students. "You can change your path anytime you want. It's about the risk and reward, recognizing an opportunity when it presents itself and having the self confidence to do something about it. You can make your life anything that you want it to be."

Senior Juliana Ortiz delivered the student speech. A communication studies major who earned her degree nearly a decade later than planned, she had paused her education to care for her mother who was battling breast cancer.

“This pandemic birthed in us a spirit of resilience, strength, and perseverance,” Ortiz said. “All I ask is that you don’t let that spirit die here. Carry it with you in this next chapter that awaits.”