Learn more about how you can make an impact at Rider 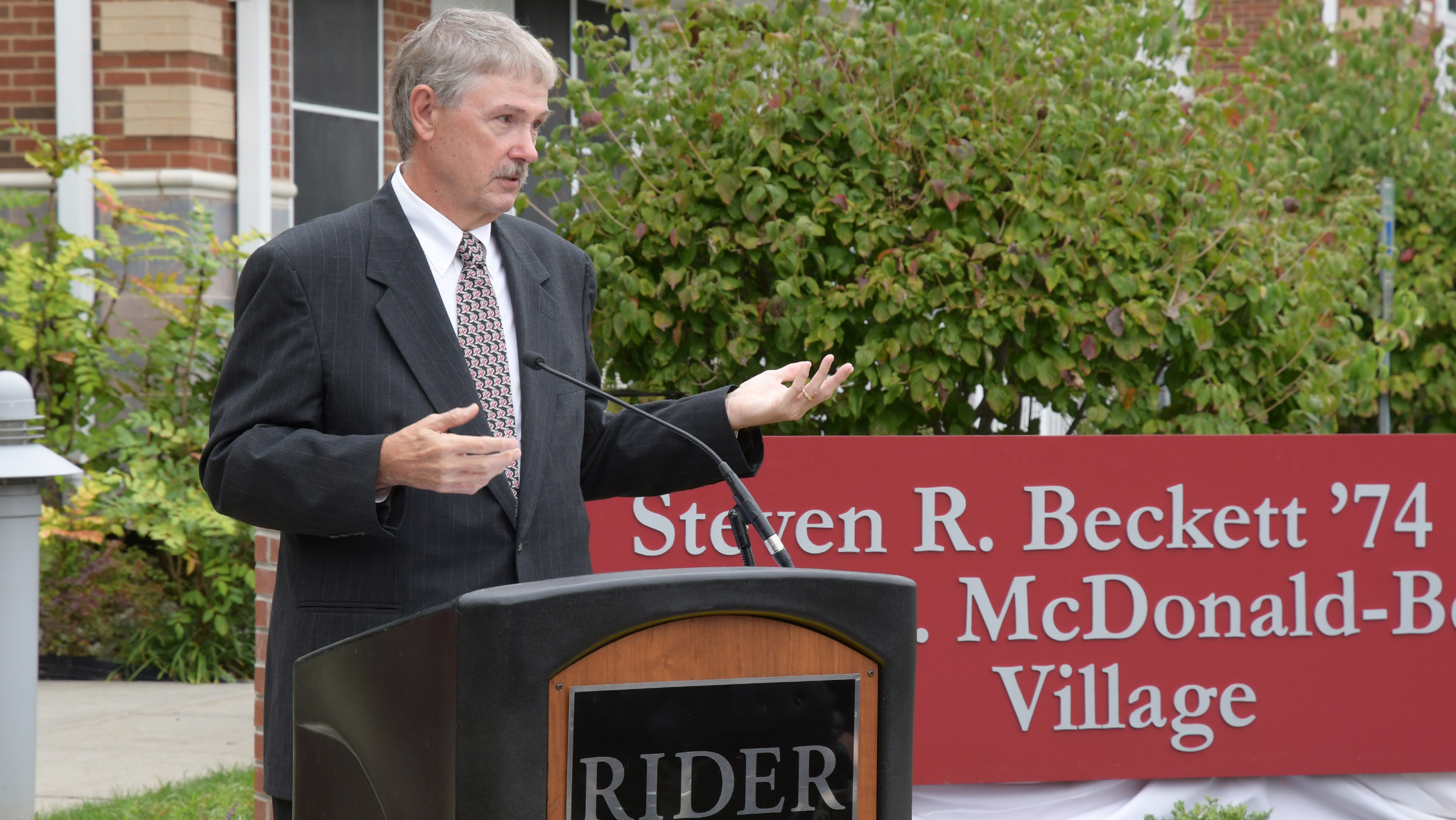 Rider University alumnus Steven R. Beckett ’74 and his wife, Sharon A. McDonald-Beckett, have pledged their entire estate, currently worth $4.5 million, to the University through a planned gift to support full-tuition scholarships for students majoring in accounting.

As an endowed scholarship, the gift will, when realized, provide up to four undergraduate business students per year the opportunity to attend the University tuition-free. In addition, the couple has also generously pledged additional funds over the next five years to provide one full-tuition, four-year scholarship beginning this academic year to one entering freshman studying accounting.

In honor of the couple’s faithful support of Rider, the University has named its first environmentally sustainable residence hall the Steven R. Beckett and Sharon A. McDonald-Beckett Village.

“Steve and Sharon’s generosity will impact generations of accounting students and enhance the University’s ability to attract even more talented and bright undergraduates to the major,” says Rider University President Gregory G. Dell’Omo. “We are extremely grateful for their support of the program, their ongoing commitment to education and for their steadfast loyalty to Rider.”

The Becketts say they chose Rider to receive their estate because they felt their gift could make the most impact here. “I didn’t have two nickels to rub together when I started going to school,” says Beckett, who graduated from Rider with a Bachelor of Science in Commerce with a major in accounting after receiving an ROTC scholarship during his sophomore year. He went on to earn a master’s in business administration from Drexel University before serving in the military and subsequently becoming a certified public accountant. “If I can help a kid get an accounting degree, which is a good degree to have, then I know it will mean something.”

Xander Praski, a first-year student in Rider’s College of Business Administration who is from Jackson, N.J., was selected as the recipient of the Beckett’s first full-tuition scholarship. Praski’s entire tuition will be covered by the Becketts’ gift and can be renewed for up to four years or until he completes his undergraduate degree.

"Receiving this scholarship is one of those life-changing events that I will never forget,” says Praski. “This has drastically changed the future for my family and me. Because of the Becketts’ generosity, I can now pursue my dream without the burden of debt.”

The Becketts have been longtime, and faithful, supporters of the University for close to 40 years. They established The Steven R. Beckett and Sharon A. McDonald-Beckett Endowed Scholarship in 1997, and the scholarship has supported more than 35 students. Formerly of Skillman, N.J., the Becketts relocated first to North Carolina before eventually settling in Florida. Prior to moving, Beckett was a member of Rider’s Accounting Advisory Council and sat on the University’s campaign steering committee.

He is a retired vice president and controller of Tosco Refining Company, one of the largest independent refiners of petroleum products in the United States. He began his career at one of the “Big 8” accounting firms, Arthur Young & Co., before joining the internal audit division of Phibro, a rapidly expanding commodities firm. He eventually became assistant controller and accounting manager of the company’s oil trading division, Phibro Energy. His wife, Sharon A. McDonald-Beckett, holds a master's in business administration from Baruch College and is also a certified public accountant. She worked as an independent consultant before her retirement.

During his time at Rider, Beckett was an active member of the ROTC and Delta Sigma Pi, a professional fraternity dedicated to the study of business, and enjoyed playing intramural flag football and tennis.

“Rider was very instrumental in my whole education and growing up process,” says Beckett. “I had a buddy who went to a large university and he lasted one term. He became lost in their introductory classes, which were 300 to 400 people in a large lecture hall. Rider’s intimate campus and small class sizes allowed me the opportunity to interact with professors, which helped me tremendously.”

He added that he particularly enjoyed the fact that practicing certified public accountants taught several of his classes because they brought real-life experiences to the program and a reality of what to expect in the workplace.

“From a career point of view, Rider really helped me,” Beckett says, adding that he hopes the endowed scholarship he and his wife are supporting will have a similar impact on students’ lives.

Learn more about how you can make an impact at Rider