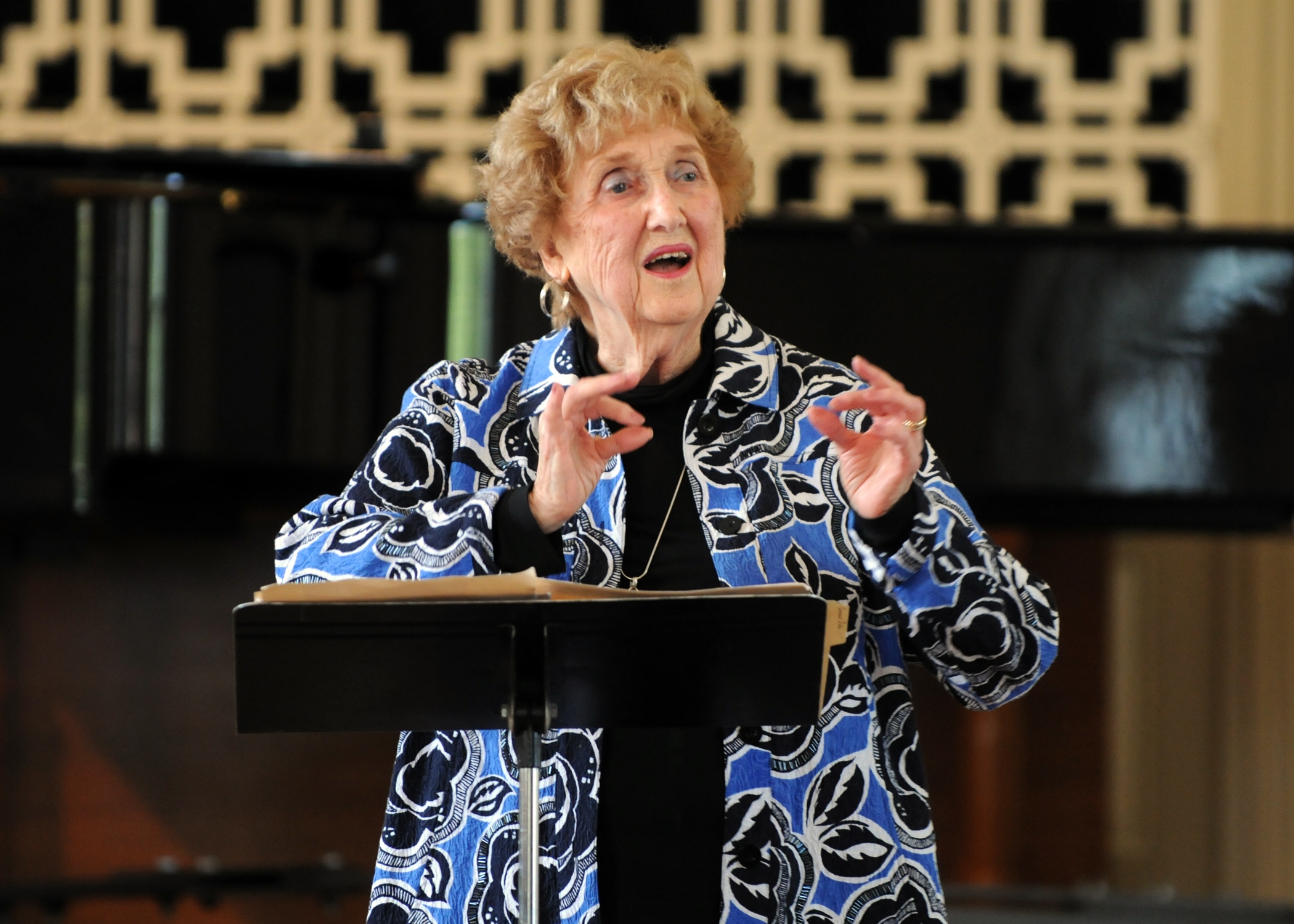 The choral world lost a shining light with the passing of Helen Hubbert Kemp '41 on August 23. The video below documents the memorial service, held in Bristol Chapel on the Westminster Choir College campus, which was attended by many alumni, friends and choral luminaries. Download a PDF of the order of service.

The follow obituary, written by Helen Kemp's family, touches on the enormous impact Helen Kemp had on our world. Westminster Choir College is proud to count her as an alumna, faculty member and renowned ambassador for choral music.

Our beloved Mother, Grandmother, Great-Grandmother, Mother-in-law, and Aunt, Helen Hubbert Kemp, passed peacefully in her home on Sunday morning, Aug. 23, 2015, in Jamison, Pa., at the age of 97. She lived a remarkable life, and set an example for us to follow: to live with purpose, to love with no bounds, and to sing with joy.

Helen Kemp was born in Perkasie, Pa., on March 31, 1918, Easter Sunday, to Frieda and Edward Hubbert. Her father and brother established E. Hubbert & Son, a baseball stitching company in Perkasie. Music was a part of daily life in the Hubbert house, and it was this love of music and singing that led Helen to discover her own lyric soprano voice. She attended Westminster Choir College in Princeton, N.J., where she sang under Toscanini, Barbirolli, Rachmaninoff, and with Leopold Stokowski on the sound track of Walt Disney’s "Fantasia." At Westminster she met and fell in love with her life partner, John S.C. Kemp. They married in the Westminster Chapel in 1942, and over the next 13 years, had five children. Helen and John each served two tenures on the faculty at Westminster Choir College in the Church Music and Voice departments. In 1949, Helen moved with her husband and children to Oklahoma City, Okla., where they spent 20 years establishing an acclaimed “graded choir program” at First Presbyterian Church, involving over 700 choristers of all ages.

Well-known in her early career as a soprano soloist in major oratorios, it was her love for the art of singing that Helen brought into her work with children's choirs, which she regarded as the seed-bed for musical, artistic, and personal growth of young choristers. She trained children and their teachers in the art of choral singing for more than seven decades. The Kemps served as founding members and leaders of Choristers Guild, the international organization for children's choirs that provides materials, music, and support to directors/teachers.

Known internationally as a specialist in the area of training young voices, Helen Kemp served as guest conductor and clinician at universities and churches in all 50 states as well as in countries around the world. A prolific writer and composer, she has published over 35 best-selling and widely performed anthems. Her books and instructional materials have become standard resources for conductors and teachers everywhere. She has inspired fine composers to write choral music for children. A hallmark of her work was her ability to empower dedicated volunteers to be successful choir directors while presenting techniques so solid and engaging that highly-trained professionals continued to learn from her.

Upon her retirement from Westminster, Helen Kemp was named Professor Emerita of Voice and Church Music. She received honorary Doctorates from Westminster Choir College and Shenandoah University. She was awarded The Elaine Brown Award for Choral Excellence from the Pennsylvania ACDA, The Williamson Medal, and an honorary lifetime membership in the Presbyterian Association of Musicians. Helen was honored in 2008 by the establishment of the Choristers Guild Helen Kemp Lectureship, and in 2010 by the National ACDA with the The Helen Kemp Award for Lifetime Commitment to Excellence in Choral Music.

In the later years of her life, Helen developed a new passion for working with Singing Seniors. She conducted the “Manor Singers” at the Manor at York Town, where she lived and thrived. Our family is grateful for the wonderful friendships that surrounded our Mom at the Manor, and we remember the Manor Singers for the joy they shared with all of us.

“She blessed us on our way with countless gifts of love.”

In lieu of flowers, sing a joyful song in Helen’s memory!

If you would like, donations may be made to:
The Kemp Endowment for Church Music
Westminster Choir College of Rider University
101 Walnut Lane, Princeton, NJ 08540
rider.edu/wcc (Please note that the gift is in memory of Helen in the comment/tributes section)