Graduates honored during a ceremony at Homecoming and Family Weekend celebration 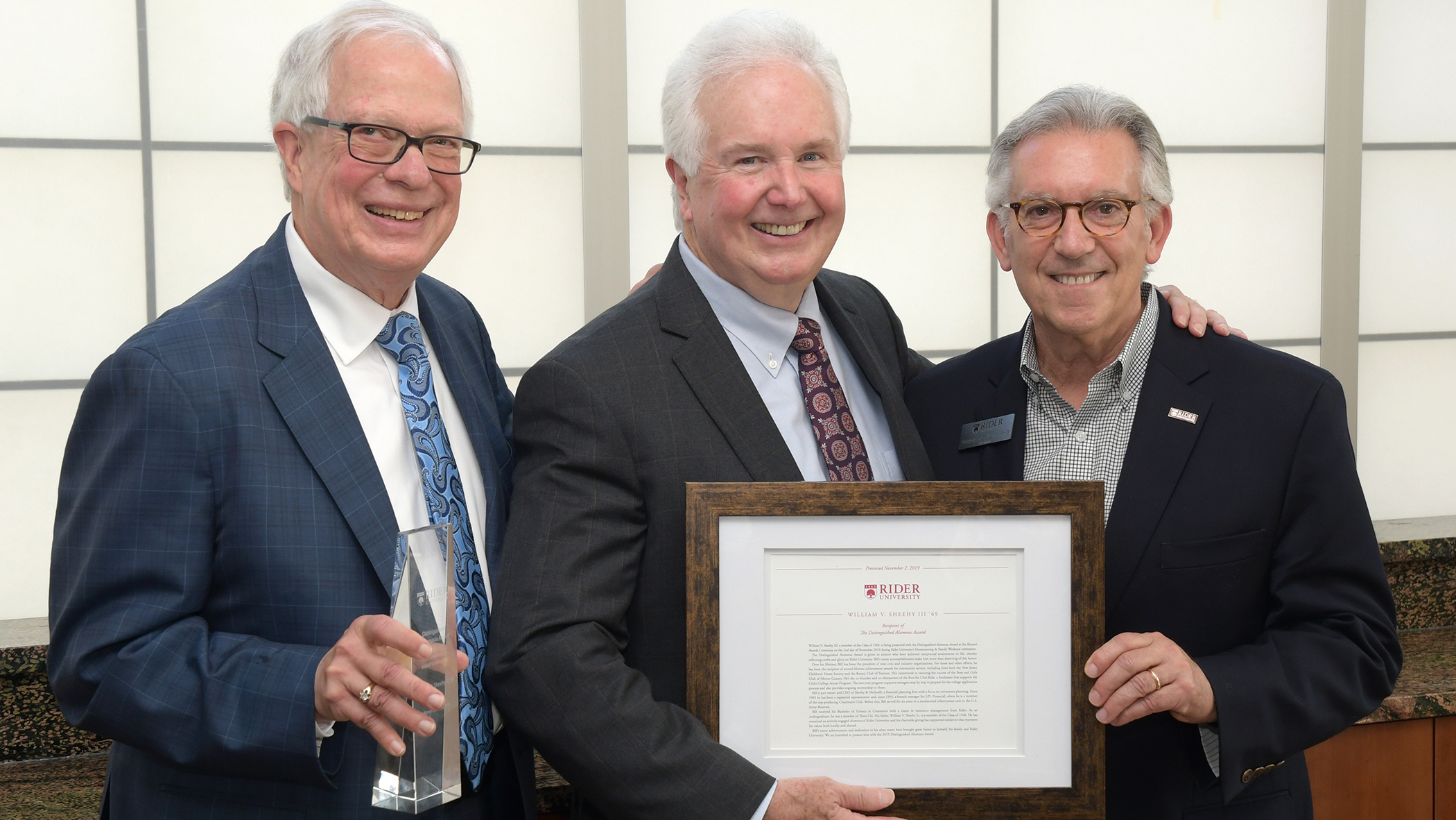 On Nov. 2, five distinguished alumni of Rider University were recognized for their professional accomplishments and outstanding contributions and service to their professions, communities and alma mater.

All of the recipients were recognized during a ceremony at Rider Homecoming and Family Weekend celebration.

William V. Sheehy III '69 received the Distinguished Alumnus Award, which is given to alumni who have achieved exceptional attainments in life. Part owner and CEO of Sheehy & Molinelli, a financial planning firm with a focus on retirement planning, Sheehy has been the president of nine civic and industry organizations. For those and other efforts, he is the recipient of several lifetime achievement awards for community service, including from both the New Jersey Children’s Home Society and the Rotary Club of Trenton.

Sheehy received his Bachelor of Science in Commerce with a major in insurance management from Rider. His father, William V. Sheehy Jr. '46, is also a Rider alumnus.

John Anthony Dalesandro '87 received the Harold L. Conover Leadership Award, which is bestowed annually upon a Rider graduate who has distinguished him or herself as an exemplary leader in the field of nonprofit, professional, community or government service. Dalesandro earned a bachelor's in business education from Rider in 1987.

Shortly after graduating, he followed his interest in law enforcement and joined the U.S. Department of Justice where he would serve the drug enforcement administration for 28 years. Beginning as a special agent, Dalesandro has risen through the ranks to become a supervisory special agent dedicated to complex drug diversion investigations.

Justin F. Blum '75 received the Lawson R. McElroy Award in Engaged Learning, which is awarded to an alumnus or alumna who works in either the private or public sector in support of a student or employees learning outside of the formal classroom. Blum served in the United States Army for 21 years of active duty until his retirement in 1996. He then became a senior instructor for the Army Junior ROTC program at Marlboro County High School in Bennettsville, South Carolina. Through that position, he is actively involved in making a difference in a small, economically disadvantaged community, teaching students about character, leadership, citizenship and the benefits of education.

After graduating from Rider with a Bachelor of Arts in History, Blum went on to earn a Master of Public Administration in Manpower Management from Golden Gate University and a Master of Arts in Counseling from Webster University.

Penelope Richardson Melchior ‘82 received the Gordon E. Prichard ’63 Award for Volunteer Service, which is bestowed annually upon a Rider graduate who has distinguished him or herself as exemplary in providing volunteer service to the University.

Melchior has been involved with the University as a volunteer for more than 35 years. After graduating with a Bachelor of the Arts in French, she began as secretary of the Rider Swimming and Diving Team alumni group — a role she has never left. She has been consistently instrumental in increasing alumni engagement and philanthropic support for the program, while also serving as a valuable mentor to current student-athletes. This past year, Melchior helped efforts helped to solicit critical alumni backing for the renovation of Richard A. Coppola Pool.

Hunter M. Morgen '16 received the Outstanding Young Alumnus Award, which is awarded to an alumnus who has completed his studies at Rider within the last 10 years and who has achieved notable success in his or her work. At Rider, Morgen earned a bachelor's in political science with a minor in political communication. Today, his professional experience as a special assistant to the president and policy advisor has provided him the opportunity to work at the highest levels of government. Rising through the ranks at a remarkable clip, he has previously served as a member of the Office of Policy Planning in the U.S. Department of State and a policy advisor for the presidential transition team for the Trump administration.

All recipients were present at the ceremony except for Blum, who was unable to attend.