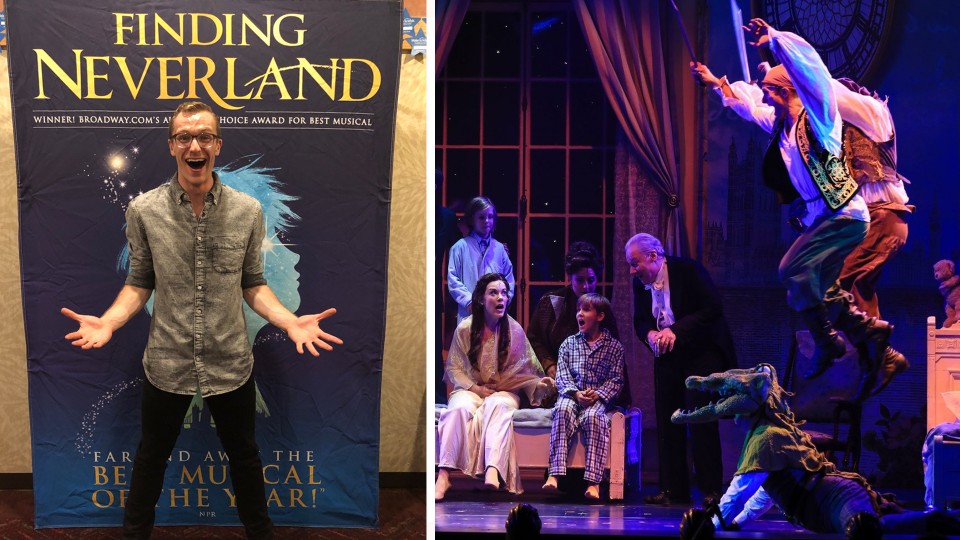 Like Peter Pan, Braden Sweeney '17 is always on an adventure. After two years of sailing throughout the world and entertaining Norwegian cruise line passengers with musical and dance performances, he is traveling to more than 50 cities in the national tour of the Broadway musical Finding Neverland.

Based on the Academy-Award-winning film, Finding Neverland follows playwright J.M. Barrie's journey to create the classic story Peter Pan. Inspired after meeting widow Sylvia and her four young sons, Jack, George, Michael and Peter, Barrie draws upon the young boys' escapades to influence the boy who never grew up. The production, which runs through April 2020, creates a juxtaposition between the real-world characters' lives and the magical world of Peter Pan.

As an ensemble member, Sweeney plays a host of characters to illustrate the fluctuating worlds.

"Throughout the show I have about 11 costume changes," he says. "I go from playing the family's butler, Albert, to a demon pirate, to a happy pirate, to a theatergoer and a general ensemble member. We hardly ever leave the stage and if we do it's for a few seconds to change."

Choreography by the Emmy-Award-winning Mia Michaels plays a large role in fusing the fantastical elements of the show with the pedestrian.

"One of the things that I love most about this show is how even the simplest movements are choreographed, which makes it more of a challenge, but also makes it so much more interesting to perform," Sweeney says. "It really helps bring the emotions to the forefront in our performances. In a typical show, you learn the choreography for the dance numbers, but with this, it's everything."

Sweeney found his love for dance after his initial calling of singing and acting. Now, it's his foremost passion. Sweeney says his time at Rider as a musical theatre major exposed him to a variety of dance styles outside the traditional musical theatre style.

"We never stopped working at Rider, whether it was a main-stage show, a cabaret or a student-run production where we could be working on a hip-hop piece or a contemporary number," he says. "That type of eclectic training really taught me about a number of styles."

During his time at Rider, Sweeney was cast in dance ensembles frequently where he learned how to add specificity to his movements based on his characters, which has aided him greatly in Finding Neverland.

"That sort of training was definitely helpful in this show because I'm creating so many different characters," he says. "I know how to add in these little moments during my performance without words that help build this specific world."