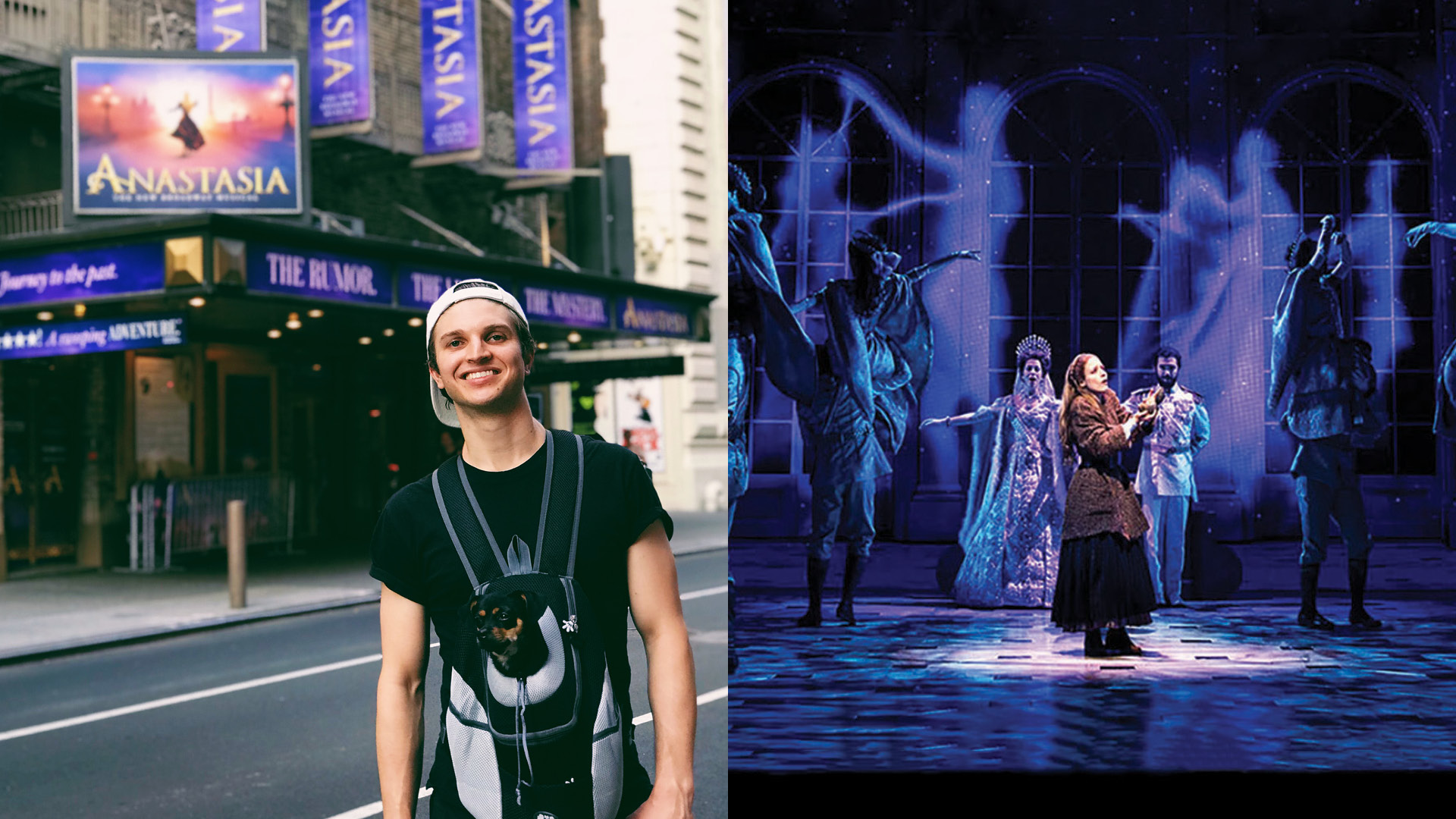 For the second time in two years, Colby Dezelick '16 finds himself gracing a Broadway stage. Last year, he scored an ensemble role in the Broadway revival of Miss Saigon. Today, he performs eight shows a week as an ensemble member and is the understudy to Dmitry in Anastasia.

Finally stepping on the stages he's dreamed about since he was a child is still difficult for Dezelick to wrap his head around.

"The idea of Broadway was always such an elusive, abstract concept for me growing up," he says. "I've always been involved in dance and theater, from when I was young taking dance classes, to auditioning for community theater, high school theater, college shows and now Broadway shows. All these things added up in little increments. I'm on Broadway and it still doesn't make sense in my head sometimes."

The ensemble of Anastasia plays a key role in creating the atmosphere for the story. In one evening, Dezelick is a finely dressed suitor for a royal family member, a poverty-stricken citizen of 1920s St. Petersburg, Russia, and a communist solider.

"Similar to my role in Miss Saigon, being in the ensemble requires you to do a lot of different things," Dezelick says. "It's fun to be able to create all these characters and help establish the environment for the story to take place."

Inspired by the 1997 film, Anastasia follows the journey of a young woman named Anya as she uncovers her mysterious past. Set in 1920s communist Russia, the story surrounds the execution of the last imperial dynasty to rule Russia and the rumors that one family member, Anastasia, escaped the massacre.

During his time as a student, Dezelick starred in Rider's productions of All Shook Up, the musical based on Shakespeare's Twelfth Night that uses the music of Elvis Presley, and in the rock musical Spring Awakening. He also had the opportunity to write, stage and direct his own original musical, Between the Lines, because of the support from the musical theatre faculty.

"Having professors work with me and encourage me to create my own musical as a student is a real testament to Rider," he says. "They really help students nourish their passions and want to see them create in more than one way."

Each year, Rider's musical theatre program offers three fully staged productions, with at least three additional performance opportunities within the Department of Theatre and Dance. Led by faculty and experienced directors, conductors and choreographers from the professional community, the performances showcase students in both the voice primary and musical direction tracks of the bachelor's program.

Though Dezelick's Broadway dreams are becoming a reality, he knows the journey to make it as an actor and Broadway performer is not always a clearly defined path.

"Working as an actor in New York is a choice I have to make every day," he says. "It's a tough business, and there are days when you feel how tough it is, but I choose every single day to pursue this career. It's very humbling to see how I got here."