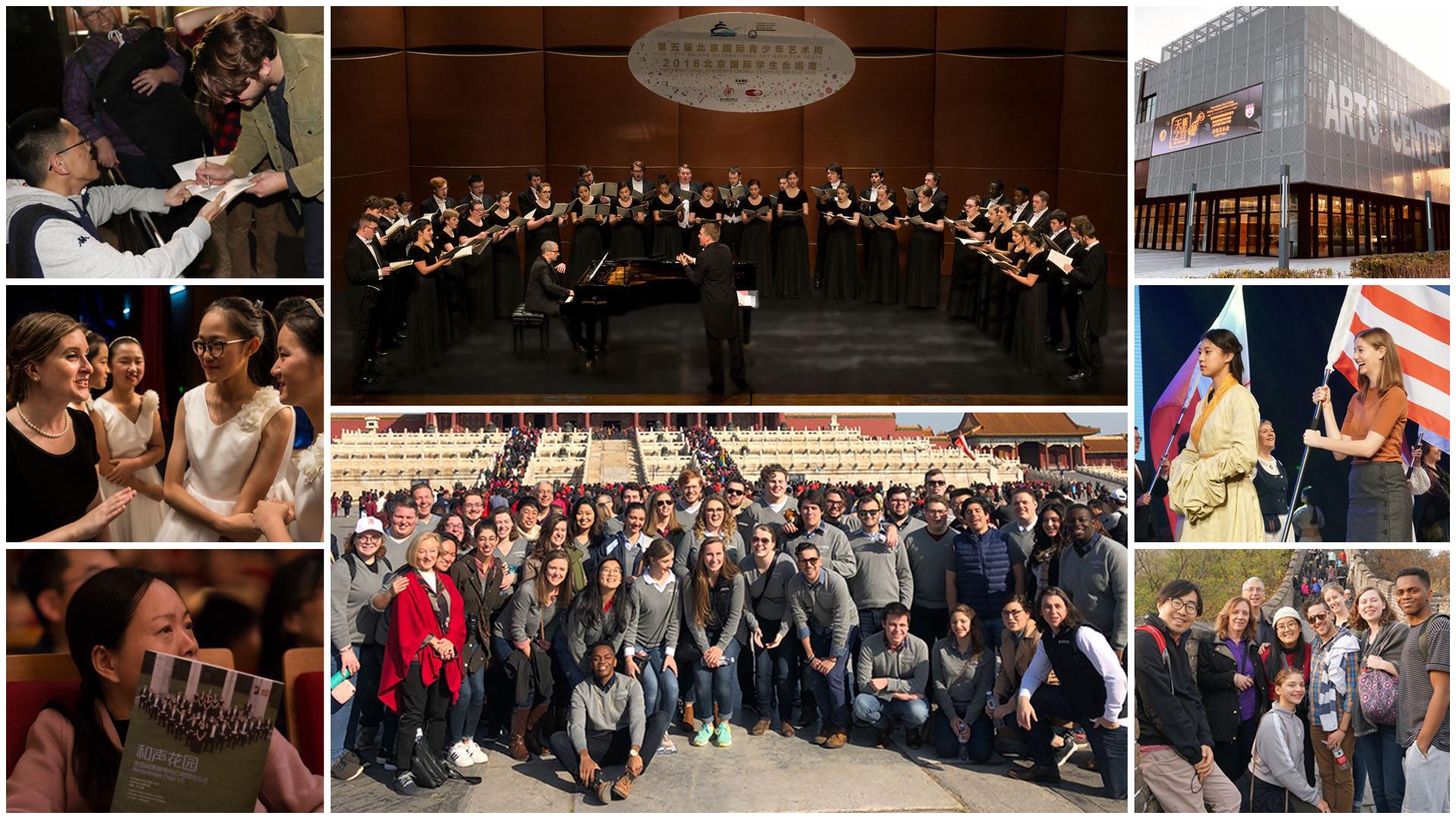 Since its founding in 1920, the Westminster Choir has served as an American Choral Ambassador through its tours and performances in 29 countries. In October, they added one more nation to that list: China.

At the invitation of and with the financial and logistical support of Kaiwen Education — which handled all booking arrangements and travel details — the ensemble spent a whirlwind 8 days in Beijing participating in the 2018 Beijing International Students Choral Festival, visiting both Kaiwen Academy campuses and squeezing in some sightseeing along the way.

The tour certainly presented some logistical challenges – coming just five weeks into the semester. The ensemble spent many hours learning, refining and memorizing the diverse repertoire. The program represented a wide range of choral music and included compositions by three Westminster composers. And they hit the ground running – literally. After leaving the Westminster campus at 7:30 a.m. on Sunday, October 14, the Choir members, accompanied by Dean Marshall Onofrio; Professors JJ Penna and Joe Miller; and staff members Anne Sears, Alexander Kanter and Carolyn Sauer, boarded a flight that landed 13 hours later in Beijing – 1:35 p.m. on Monday, October 15.  After clearing customs and enjoying a warm welcome at the airport from Kaiwen’s representatives, they arrived at their hotel with 90 minutes to freshen up before heading to Tsinghua University for the Festival Opening Ceremony. Graduate student Rachel Feldman and Dean Onofrio represented the Choir College — the only American institution participating in the festival — in the parade of nations, with Rachel carrying a large American flag.

Tuesday, October 16 Dr. Joe Miller was joined by several choir members to present a lecture to choral festival participants about choral formants and choir voicing.  Westminster Choir member Haochen Wang, a second-year Choral Conducting graduate student from Tianjin, China, was his interpreter.  The audience was eager to hear what he had to say, and they made good use of their phones to document Miller’s presentation.

Reflecting on the response to his presentation, Dr. Miller said, “The Chinese choral community is one of the fastest growing markets in all of classical music, and they are hungry for curriculum development and the expertise to bring quality vocal and keyboard education to their schools.”

Following a celebratory hot-pot lunch, the entire group traveled to Golden Sail Concert Hall for their first festival performance, joining with the choir from the Malaysia Institute of Art, conducted by Susanna Saw. It was something of a homecoming for everyone since Ms. Saw is enrolled in Westminster’s online Master of Voice Pedagogy program and participated in the Choral Institute at Oxford and Westminster’s Summer Choral Festival earlier this year. Jet lag notwithstanding, both choirs shared some impromptu singing and dancing backstage after the concert.

“That’s what it’s all about,” exclaimed Westminster Choir member Jonathan Hartwell after making a few new friends from Malaysia.

Wednesday, October 17 the Choir was up early to tour one of Beijing’s best-known historic sites, the Summer Palace, and then headed to Kaiwen’s Haidian campus for lunch and a concert. The campus is something of an oasis away from the hustle and bustle of the city, built around lush gardens and a pond. After lunch in the school’s dining commons, the Westminster students presented an informal concert and enthusiastically cheered on the Kaiwen Academy’s lower school choir, who performed for them. After meeting the music faculty and academic leadership and learning more about Kaiwen’s comprehensive academic program and educational philosophy – and a few more photos  - the choir headed back to Tsinghua University for a joint concert with the Beijing Bayi School Choir. Winner of 12 prizes at previous Beijing Youth Arts Festivals, the ensemble has performed in the United States, Canada, Britain, Austria and the Czech Republic. The program featuring the Westminster Choir and this highly regarded local ensemble attracted a great deal of media attention, and the hall was filled with cameras.

Dean Onofrio said, “Our visits to the two Kaiwen academies were wonderful opportunities for us to learn about the school programs and the educational mission of the academies. It is clear that Kaiwen’s mission aligns directly with the core aspirations of Westminster. Their commitment to musical and educational excellence is deep and genuine.”

Thursday, October 18 the Choir headed to the iconic Forbidden City in the heart of Beijing. Despite the crowds, there was time to relax and take some “action shots” with Dr. Miller and graduate student Gloria Wan and to do a little souvenir shopping before boarding the bus for Kaiwen’s Chaoyang campus. Pulling up to Chaoyang’s Arts Center and seeing the large video screen announcing the Westminster Choir’s concert gave everyone a boost. Following lunch in the dining commons, the Choir joined Kaiwen’s upper school students in the black box theater and were formally greeted by the Kaiwen Academy leadership.

Following the workshop, the Westminster students and staff divided into small groups for campus tours, which included the lower school library, the indoor ice rink, pool and basketball court, as well as dance studios and the outdoor sports fields. The Choir’s evening concert was the inaugural event in a new performing arts series at the Kaiwen Arts Center. It was part of an Admissions open house, and the large and enthusiastic audience was filled with the families of current and prospective students.

The visits to the two schools provided a chance for some of Westminster’s music education majors to discuss teaching opportunities with the headmasters. Dean Onofrio said, “Several students are interested in the possibility of student-teaching in China. The Chaoyang Academy, focused on the arts, offers apartment housing to all international faculty, a perk that attracted much interest from the students.”

Two key performances made up the schedule on Friday, October 19. In the morning, the Choir headed to the National Centre for the Performing Arts, whose contemporary egg-shaped architecture makes it one of the most recognizable buildings in modern Beijing. Announced as a “Joyous Friendship Concert,” the program featured performances by the Koris Balta from Latvia and the University of Johannesburg Choir, as well as the Westminster Choir.

Following the concert and lunch, the Westminster Choir members walked across Tiananmen Square and checked into the Forbidden City Concert Hall for their evening performance. Independent from the Festival, the concert was open to the public through the classical music series offer by the Concert Hall, which is renowned for its fine acoustics. The audience was filled with Kaiwen representatives, choral enthusiasts and many families, who eagerly purchased all of the CDs Westminster had brought to sell at the concert.

It was a special night for choir member Yiran Zhao, a resident of Beijing, who accompanied the choir for Youth Dance, a traditional Chinese song, as an encore. “I remember Dr. Miller asking me to say something right before our biggest concert in Forbidden City,” she said. “I was talking, then I started tearing up. I thought of all the sadness that I have been through the past 10 months being away from home. Then people around me started to comfort me and my tears turned to the tears of joy because I thought of all the friendships I have made, and now I was home with the world-renowned Westminster Choir, a dream that I've never dared dreaming of. And it came true. It came true so wonderfully.”

Choir member Jessica Huettemann also fondly recalled the concert: “During the encore of our final performance at the Forbidden City Concert Hall, we sang an arrangement of a beautiful Chinese folk tune called Yimeng Mountain Song. As we began the piece, I watched as two girls sitting in the front row gasped and looked at each other with excitement. They proceeded to close their eyes, one resting her head on the other’s shoulder, and to listen peacefully as we sang a tune so familiar and beloved to them. As the song concluded, the arranger, who was sitting in the audience, stood and applauded us with a look of pure joy on his face. To be able to share this music with a huge Chinese audience was more special than I ever could have imagined, and brought tears to my eyes. It was an unforgettable moment that truly united us all.”

Saturday, October 20 was a day to be tourists! The Choir was able to catch a bit of extra sleep before heading to the Great Wall of China. Ascending to a point in the wall via gondola, the Choir members explored one of the Seven Wonders of the World on their own before choosing one of three options to descend to their starting point: the gondola, a ski lift, or a sled on a toboggan track. There was something for everyone and lots of exciting stories and photos. The day ended with a dinner hosted by Kaiwen at one of Beijing’s most renowned Peking Duck restaurants, where everyone was treated to the legendary delicacy and all of the traditional dishes that go with it.

The morning of Sunday, October 21 was free and allowed everyone some time to explore a bit of Beijing before heading back to Tsinghua University for the Festival’s Closing Ceremony and the opportunity to celebrate the conclusion of an unforgettable visit. At the ceremony, the Beijing Minister of Education presented each choir with a golden fabric scroll on behalf of the Choral Festival.

Monday, October 22, the Kaiwen team that accompanied the Choir during its visit shared the bus ride to the airport to say farewell after many hugs and photos. "One of my favorite memories of the trip was getting to know staff from Kaiwen, especially our tour leader, Dan,” said Choir member Jillian Newton. “Dan and three other Kaiwen staff members were with us every step of the way and truly made sure we were well supported and feeling comfortable. They were also very open and honest and were willing to answer our many questions about Kaiwen and the upcoming relationship with Westminster. I so appreciated our genuine conversations and their ability to make us all feel welcome during our short time in Beijing!"

Summing up the trip, Dean Onofrio complimented the Kaiwen staff on their hospitality, attention to everyone’s needs and their good humor. He described the audiences as “very appreciative and enthusiastic – for instance, following the Forbidden City concert, Dr. Miller was deluged by requests for pictures and autographs.” For the more than half of the group who had never been to Asia, this truly was a life-changing experience.