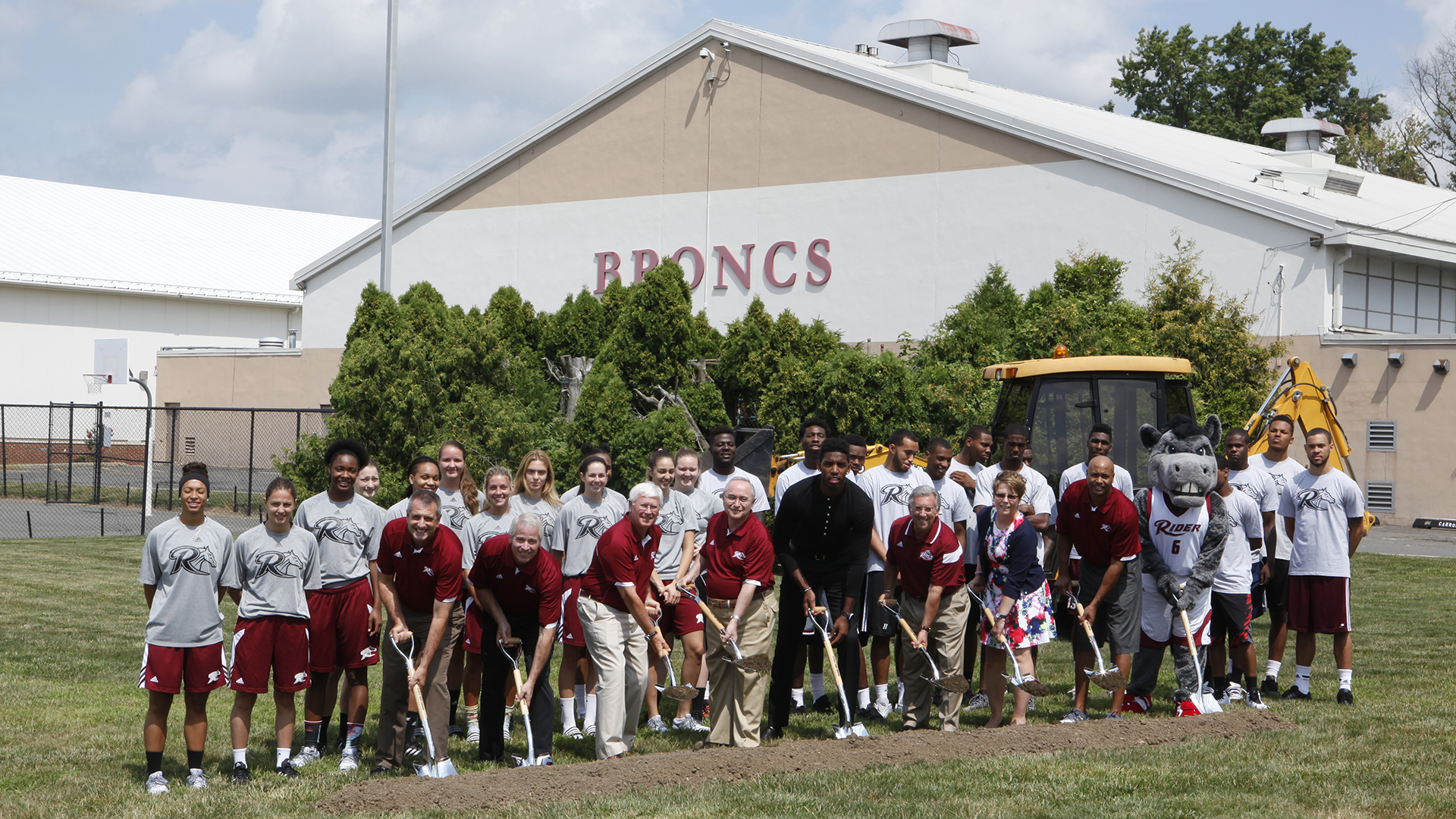 Less than a decade ago Jason Thompson of the Golden State Warriors was making a name for himself on the Rider University basketball court.

Now, Rider is making a basketball court with Jason Thompson’s name on it.

Groundbreaking took place Monday on construction of an 8,400 square foot basketball practice facility, the second phase of a multi-phased project to enhance and expand Rider’s historic Alumni Gymnasium, the oldest building on Rider’s Lawrenceville campus.  Construction is expected to be completed in spring 2016.

On hand to help with the groundbreaking was Thompson, a 2008 Rider graduate, seven-year veteran of the National Basketball Association and one of the newest members of the defending NBA champions Golden State Warriors. Thompson’s generous contribution to the project led to the naming of the basketball court in the new facility in his honor.

“Jason has always been a great ambassador for Rider University, both during his time at Rider and his time following graduation in the NBA,” said Rider Director of Athletics Don Harnum. “The Jason Thompson Court recognizes Jason for his financial commitment to the Campaign for Rider Athletics, his passion for Rider Basketball and his willingness to help us move the program forward."

"I had a great experience as a student and as a player during my time at Rider,” said Thompson, an All-American who graduated from Rider with a degree in Communication, along with 2,040 points and a program-record 1,171 rebounds in 122 games. “The people at Rider did a lot for me to help me get where I am today and I am fortunate to be in a position to contribute to a project that will help elevate the profile of the basketball program and the University.”

Thompson played in 541 NBA games as a Sacramento King, after being the 12th player (and first college graduate) selected in the 2008 NBA draft. Thompson has compiled over 5,000 points and 3,750 rebounds in seven seasons in the NBA, all for the Kings, and is now a Sixer.

The first phase of the multi-phased project, completed two years ago, included the addition of a state-of-the-art HD video board; modern heating, air conditioning and lighting; new flooring; a new sound system and branding initiatives.

The Alumni Gym Campaign is funded entirely through the generous support of private donations. “I’d like to thank our campaign leadership team and all our donors who have supported this important project. It will dramatically enhance the daily lives of our student-athletes and coaches, bolster recruiting and afford us greater scheduling flexibility for basketball, volleyball and wrestling which compete in Alumni Gym,” Harnum said.

For more information on the campaign, please visit www.rider.edu/athleticscampaign.