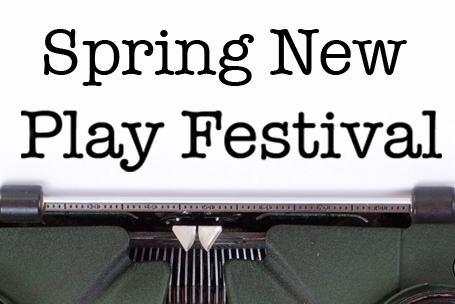 Curated by David Lee White, the festival will feature new plays by area playwrights performed by Rider University students as staged readings. The readings will be followed by audience discussion, providing valuable feedback to the playwrights as they continue to work on turning their plays into the next stage sensation.

David Lee White’s Real True Crime, directed by Adam Immerwahr, will be performed on Friday, February 6, at 7:30 p.m. Maddie is a 40-year-old divorcée who never finished her graduate school thesis, and now sells coffee at Wawa. Between playing the lottery and talking about true crime stories, Maddie doesn’t have much of a life. She’s waiting for a sign. When a masked intruder named Charlie holds up the Wawa and asks Maddie to come on a crime spree with him, she embarks on a journey that leads her to a secluded cabin in the woods where she meets a philandering college professor, a female punk-rocker and a former child actor turned self-help guru. Real True Crime is a play about middle-age, the search for meaning, sex, drugs and men in giant penguin suits.

David Lee White is the associate artistic director and resident playwright at Passage Theatre in Trenton, N.J. He also runs the Passage Play Lab, which has aided in the development of plays by Ian August, R.N. Sandberg, EM Lewis, Jim Christy Jr. and many others. His play Blood: A Comedy has been produced at Passage Theatre and Dreamcatcher Rep. Slippery as Sin received its world premiere at Passage Theatre as well. The one-act play White Baby was originally produced at Passage Theatre, then at Emerging Artists Theatre. He is currently working on the musical Live Stream with singer/songwriter Sarah Donner and director/co-creator Adam Immerwahr, as well as his new play Real True Crime and his solo show Panther Hollow.

Ivan Fuller’s Going Home to Die No More, directed by Will Steinberger, will be performed on Saturday, February 7, at 7:30 p.m. During the American Civil War, three women disguise themselves as men and follow their loved ones into the fight. Going Home to Die No More traces their intimate, epic journey from the comic process of transformation, through the battlefields, and into the darkness of Andersonville.

Ivan Fuller serves Rider University’s Westminster College of the Arts as professor of theatre, chair of the Theatre and Dance Department and associate dean of the School of Fine and Performing Arts. His play, Eating into the Fabric, was chosen for the Mainstage Reading Series at the Great Plains Theatre Conference in May 2009, where it was awarded a Holland New Voices Award for Outstanding Play. It was also a semi-finalist for the Eugene O’Neill National Playwriting Conference. In July 2009, he served as playwright-in-residence for Summer Literary Seminars in Vilnius, Lithuania. His last play, In Every Note, was a semi-finalist for both the Eugene O’Neill National Playwriting Conference and the Princess Grace Playwriting Fellowship competition.

Ken Kaissar and John F. Kline’s Stabilized Tubulence, directed by Jillian Carucci, will be performed on Sunday, February 8, at 2 p.m. When Fred McAlister’s ground-breaking discovery changes the face of modern sciences, his research partner, an established and recognized physicist, receives sole credit.  Fred struggles with whether or not he should put up a fight.  Stabilized Turbulence explores the mystery behind creative inspiration, asking the question, do we discover great ideas or do great ideas discover us?

Ken Kaissar’s adaptation of Geoffrey Chaucer’s The Canterbury Tales was commissioned by Columbia University in 2008. His 10-minute play Ceasefire, written in response to Israel’s war with Hezbollah in 2006, was an official selection in the 2012 New Works Festival at the Fusion Theatre Company, as well as a winner of the West Boca New Play Competition and a regional winner in the Kennedy Center American College Theatre Festival. His play The Victims or What Do You Want Me to Do About it? was a runner-up for the 2009 Princess Grace Award and was honored by the Lark Play Development Center as part of the Middle East America Play Commission. He teaches playwriting and theatre history at Rider University and Stockton College.

Rider University’s Theatre program has a rich tradition of preparing students for successful careers in all aspects of the theatre. Graduates of the program are working with national theatre companies, in film and on television. Campus productions have earned critical praise for more than 50 years and offer the community the opportunity to see aspiring actors in the early stages of their careers.