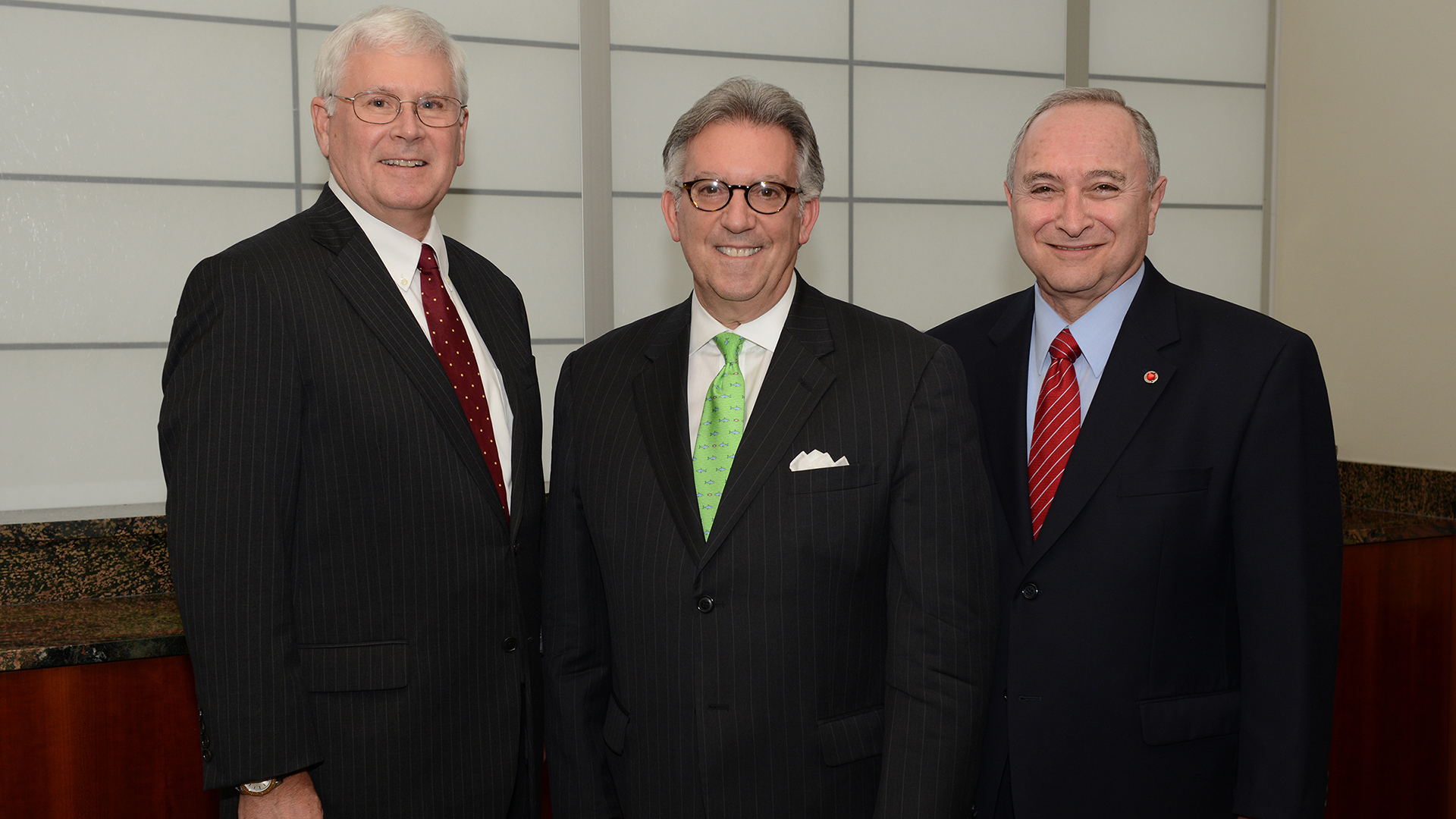 The Rider University Board of Trustees announced today the appointment of Gregory G. Dell’Omo, Ph.D., as Rider’s seventh president. Dell’Omo will succeed Mordechai Rozanski who is retiring on July 31, 2015. Dell’Omo will assume the presidency on Aug. 1, 2015.

Dell’Omo will step down from his position at Robert Morris University (RMU), in Pittsburgh, Pa., at the end of the 2014-2015 academic year. Rozanski will remain at Rider through the end of July 2015. Rider University is currently celebrating its 150th anniversary, which will culminate with Dell’Omo’s official inauguration.

“The Rider opportunity is an exciting one, and I am honored to have been selected to lead this outstanding university,” Dell’Omo said, adding that while leaving RMU and the progress and achievements that it has made over the past ten years is difficult, returning to his home state of New Jersey where he will be closer to his extended family was an important factor in his decision.

Michael B. Kennedy, ’72, chairman of the Rider University Board of Trustees and chair of the Presidential Search Committee, said the board selected Dell’Omo from an extensive pool of candidates. Rider was supported in that process by its consultant, Storbeck/Pimentel & Associates.

“After a very thorough, inclusive and comprehensive selection process, involving all facets of the Rider community including deans, chairs, faculty members, student leaders, administrators, union representatives, alumni and board members, the board is extremely confident in the selection of Greg Dell’Omo as Rider’s next president,” Kennedy said. “I am certain that Greg is the right candidate who will provide the direction and vision required to continue the momentum Rider has experienced over the past decades, while leading our university into the bright future our community deserves.”

Dell’Omo’s years as the seventh president of RMU (2005-2015) have been marked by growth unparalleled in the university’s 93-year history, as it continued its transformation from a regional, commuter-based institution to a comprehensive residential university that draws full-time and part-time students from not only the Pittsburgh area, but across the country and around the globe.

Dell’Omo led RMU through the completion of its most recent five-year strategic plan and its most comprehensive capital campaign. The fundraising campaign ended in September 2012 and raised $41 million, exceeding its goal. The campaign funded two academic buildings: the School of Business Building and the Wheatley Center, which is home to the School of Communications and Information Systems. The campaign helped to boost RMU’s endowment by more than 60 percent and allowed the university to fund 30 new endowed scholarships and a research center focused on achievement among African American men. Most recently, the university broke ground on its new building for the School of Nursing and Health Sciences that is expected to open in fall 2015.

Perhaps the greatest symbol of the university’s transformation under Dell’Omo’s leadership is the dramatic increase in the number of students living on campus, from 1,140 in 2005 to 1,990 as of the fall of 2014. Fewer than 40 percent of full-time undergraduates lived on campus in 2005, versus nearly 60 percent today.

The university also built two new apartment-style residence halls and converted a nearby hotel to student housing. RMU's transformation to a residential campus is reflected by new campus housing, as well as an increased emphasis on student engagement and campus life that is at the heart of Dell’Omo’s legacy. The Student Engagement Program includes the Student Engagement Transcript (SET), which the university instituted in 2008.

Dell’Omo built on RMU’s long tradition of educating nontraditional students and working adults, bringing the university into a new age with the launch of its online degree programs. In just three years, online enrollment has climbed to 709 students. Robert Morris has also supported veterans of the U.S. armed services, becoming one of the first private institutions to participate in the federal Yellow Ribbon Program. Under that program, RMU agrees to cover the difference between the cost of tuition and benefits that eligible veterans receive under the Post 9/11 G.I. Bill. Currently 242 veterans and active-duty military personnel are enrolled at RMU.

Dell’Omo also sought to bolster RMU’s academic reputation. During his tenure the university has strengthened its honors program and placed an increasing emphasis on international education. Among the accreditations and honors that RMU has added since 2005 is AACSB International – The Association to Advance Collegiate Schools of Business, a distinction enjoyed by only five percent of business schools worldwide. RMU is also one of only 25 institutions worldwide to be named a Center of Actuarial Excellence for its actuarial science program.

During Dell’Omo’s tenure, several of RMU’s NCAA Division I sports teams enjoyed unprecedented success. The men’s and women’s basketball teams, for example, each earned berths to the NCAA tournament, with the women going twice. The men’s team defeated the No. 1 seeds at the NIT two years in a row. Last year, the men’s ice hockey team earned its first bid to the NCAA tournament, and in 2012 the women’s ice hockey team won the College Hockey America tournament championship. RMU student athletes also excel in the classroom, with an average graduation rate that is 10 percentage points higher than the national average for Division I athletes.

Dell’Omo earned a bachelor’s degree in economics from Montclair State University, a master’s degree in industrial relations from Rutgers University, and a doctorate in industrial relations/human resource management from the University of Wisconsin-Madison. He earned certifications at Harvard University from the Institute for Education Management and the Seminar for New Presidents. He held previous academic positions at Canisius College and Saint Joseph’s University, where he was dean of the Haub School of Business and vice president for external affairs.

Away from campus, Dell’Omo has been very active in the Pittsburgh community. He has served on numerous boards including the Board of Directors for the Pittsburgh Symphony, the Pittsburgh Civic Light Orchestra, and Magee-Women’s (UPMC) Hospital, among many others.

Dell’Omo, 59, is married to wife Polly, and together they have three children and two grandchildren.

Rozanski announced his decision to retire as president of Rider in January 2014. During his term, Rozanski led a successful program of institutional renewal that advanced Rider to new heights of achievement. Highlights of his tenure, which began in 2003, include strategic investments in new undergraduate and graduate programs, the establishment of the two-campus Westminster College of the Arts, a substantial expansion of scholarship support for students, extensive facility improvements on both campuses, and impressive fundraising results.

Kennedy said, “Mordechai Rozanski has made Rider University better in every way. I don’t believe there is anyone affiliated with the University or Mort who hasn’t been impressed with his vision, leadership and achievements. We are deeply indebted to his service and devotion to Rider, and pleased that Mort agreed to extend his second five-year term by two years to coincide with the University’s 150th anniversary.”

Rozanski praised the selection of Dell’Omo. “He is the ideal candidate for Rider. His superb and proven leadership skills will successfully advance the University to its next level of excellence. I am delighted that Greg will be Rider’s next president.”

“I know that Rider’s leadership team, the Board of Trustees and the University community will work with Greg to shape a new and compelling vision for Rider’s future,” Rozanski said. “In the meantime, I look forward to continuing our work together over the next eight months to complete the important tasks still remaining and ensure a smooth leadership transition.”