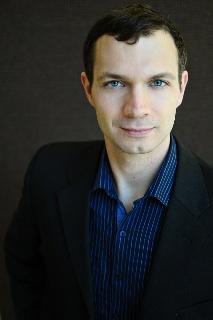 Baritone Sean McCarther serves as Associate Professor of Voice and Director of Graduate Studies at Westminster Choir College where he teaches classical and musical theater voice, voice science, and movement for performers. He received his doctorate in Vocal Performance and Pedagogy with minors in music theory and movement/postural analysis at Indiana University. He studied voice with Dr. Robert Harrison and pedagogy with the late Paul Kiesgen. Dr. McCarther earned his Master of Music degree with an emphasis in speech pathology at Indiana University and his Bachelor of Music degree at Baylor University, where he studied with Jack Coldiron.

As an academic, Dr. McCarther has published several articles in the Journal of Singing and has presented poster and podium presentations at national and regional NATS conferences and workshops, the United Kingdom’s Association of Teachers of Singing Virtual Conference, the Dalcroze Society of America’s National Conference, multiple regional conferences including the Southeastern Theater Conference, Texas Music Educators Association, and College Music Society Regional Conferences and has conducted numerous workshops at universities around the country. He has contributed chapters to two books: one on the intersection of voice science and choral pedagogy and another on creativity in performance, both with GIA Publications.

Dr. McCarther has performed leading roles in opera, musical theatre, and staged plays with JCA Management, The Lee Norvelle Theater and Drama Center, the Bloomington Early Music Festival, Bloomington Playwrights Project, and IU Opera Theatre. He is a strong proponent of new music and has appeared in several premieres including Gabriella Ortiz’s Unicamente la Verdad! (The Composer) and Don Freund’s Romeo and Juliet (Romeo). He premiered the chamber cycle Archy Speaks by composer Gabriel Lubell as part of the Ball State New Music Festival. He premiered Paul Mealor’s 1st Symphony in Aberdeen Scotland and is a frequent soloist and chamber musician.

An advocate for physical theater and mobile singers, Dr. McCarther has created a movement-based performance pedagogy that helps students learn to actively engage their environment, their scene partners, and the audience with the highest potential expression. He is an advanced actor combatant with both the Society of American Fight Directors and the Academy of Fight Directors Canada and is apprenticed to Broadway fight director Ian Rose. He has choreographed violence for numerous plays and musicals both at Rider University and in the surrounding area. Dr. McCarther also serves as a member of the faculty of Westminster’s CoOPERAtive program, teaching classes in movement and voice.