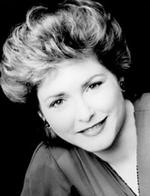 Soprano Margaret Cusack is Professor and Chair of the Piano and Voice Department at Westminster Choir College of Rider University, where she teaches private voice, opera literature, and voice pedagogy. She has been a Regional Governor of the National Association of Teachers of Singing, and is currently a member of the Artist Faculty at the Brevard Music Center. Ms. Cusack’s current and former students have sung at the San Francisco Opera, Los Angeles Opera, Washington Opera, Virginia Opera, Opera Theater of St. Louis, Glimmerglass Opera, Mississippi Opera, Eugene Opera, and the Hessisches Staatstheater Wiesbaden and the Stuttgart Opera in Germany.

Ms. Cusack is a winner of the International American Music Competition at Carnegie Hall and made her New York recital debut at Weill Recital Hall of Carnegie Hall in 1987. She made her New York City Opera debut in 1985 as Micaela in Carmen. She then became a leading soprano with the company, returning to sing Musetta (La Bohème), Nedda (I Pagliacci), Elena (Mefistofele) and, on the company’s tour to Taiwan, Violetta (La Traviata). Ms. Cusack created the role of the Empress Alexandra in the world premiere of Jay Reise’s Rasputin with the company. She received much acclaim in the role of Anna Maurrant in City Opera’s production of Street Scene. Ms. Cusack made her Metropolitan Opera debut in Elektra in 1999 under the baton of James Levine.

Her regional opera experience is extensive and includes such roles as Desdemona (Otello), both Donna Anna and Donna Elvira (Don Giovanni) and Santuzza (Cavalleria Rusticana). Ms. Cusack sang the role of Sieglinde in Act One of Wagner’s Die Walküre with Sylvan Opera in Haverford, Pennsylvania, in the fall of 2001. She has also sung the role of Fiora in Montemezzi’s L’amore dei tre re in the debut performance of the Teatro Grattacielo in New York’s Alice Tully Hall in 1997. She returned to Alice Tully Hall later that year to perform excerpts from Strauss’ Guntram with the Little Orchestra Society and Dino Anagnost in their 50th anniversary gala.

Ms. Cusack has performed frequently at the Tanglewood Festival, including as Alice Ford in Act III of Falstaff with the Boston Symphony under Seiji Ozawa, the Marschallin in Act III of Der Rosenkavalier with the Tanglewood Orchestra under the late Erich Leinsdorf, and Bernard Rand’s Canti Lunatici with composer/conductor Luciano Berio. Maestro Berio then invited her to Italy to sing three concerts with the Florence May Festival, including Mahler’s Symphony No. 2 with Christa Ludwig and conductor Lorin Maazel, as well as concerts with other Italian orchestras.

She has also given many highly acclaimed performances of such diverse works as Strauss’ Four Last Songs, Mozart’s Mass in C minor, Britten’s War Requiem, Frank Martin’s Le vin herbé, Schoenberg’s String Quartet No. 2, Mendelssohn’s Elijah, Brahms’ Ein deutsches Requiem, Mahler’s Symphony No. 8, Beethoven’s Symphony No. 9 and Rachmaninoff’s The Bells, which she performed with Semyon Bychkov and the Buffalo Philharmonic. Ms. Cusack has given numerous performances of the Verdi Requiem with the orchestras of Syracuse, Ft. Worth, Nashville, and the Chautauqua Festival.

Ms. Cusack is a frequent recital partner of JJ Penna; they have specialized in 20th century literature, in particular songs of Poulenc, Marx, Debussy, Wolf, Strauss, Barber, Rorem, Korngold, and Schoenberg. In October, 2004, they performed “A Tribute to Phyllis Curtin,” a recital celebrating the career of the great American soprano and teacher, in Lenox, Massachusetts, with Ms. Curtin in attendance. In addition to her performing and teaching, Ms. Cusack frequently lectures on opera. She earned a Bachelor of Music in voice performance and a Master of Music in teaching at the Oberlin College Conservatory of Music.