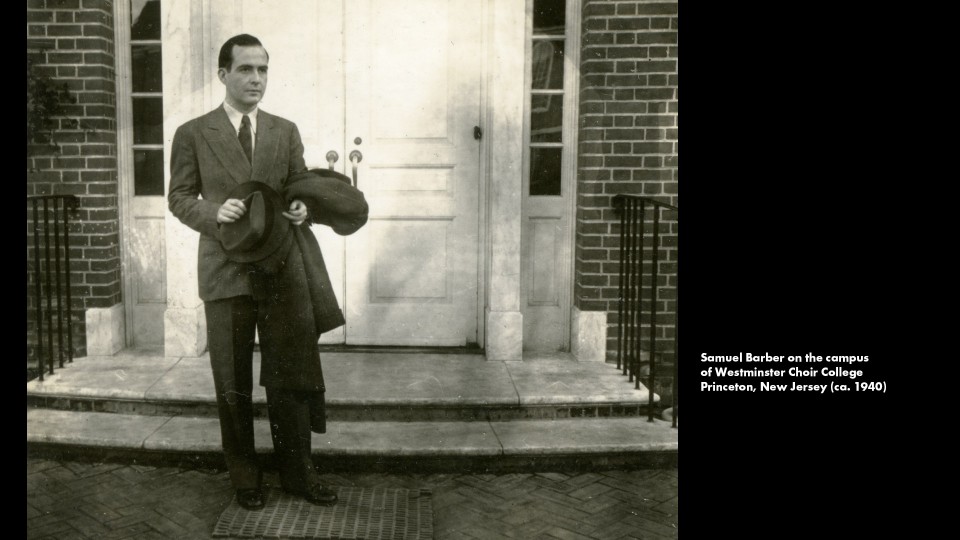 The 2020 Lindsey Christiansen Art Song Festival will celebrate the vocal music of Samuel Barber, one of America’s most beloved composers, Friday, February 28 and Saturday, February 29 in Bristol Chapel on the Westminster Choir College campus at 7:30 p.m. Students will present research papers about Samuel Barber at 6:45 p.m. on Friday, February 28.  The Festival concerts will feature Westminster students performing a program of published and unpublished works by Barber, accompanied by guest artist and collaborative pianist JJ Penna.

Heavily influenced by the music of Debussy, Strauss, Brahms and the Italian masters, Barber’s musical style mixes 19th-century Romanticism with a distinctive brand of chromaticism and modernist techniques. As a singer, Barber possessed an exceptional understanding of the voice and the expressive gestures inherent in language. He was a great lover of poetry and used literature as inspiration for his vocal and instrumental compositions. He wrote many songs and operatic works that are outstanding for their emotional depth and dramatic charge, and he is considered one of America’s greatest song composers.

The Festival program includes two of Barber’s best-known works for voice, written during different periods of his life: Dover Beach and Knoxville: Summer of 1915.

Barber composed Dover Beach while he was studying piano, voice and composition at Philadelphia’s Curtis Institute of Music. It is a setting of a Victorian poem by Matthew Arnold, and Barber himself sang the world premiere and recorded it in 1935. Often performed by Barber and regarded as his first “masterpiece,” Dover Beach remains one of his most enduring and popular works.

Knoxville: Summer of 1915 was commissioned by soprano Eleanor Steber. It has become one of Barber’s most performed works, perhaps due to its nostalgic tone and broad appeal. A setting of excerpts from James Agee’s prose poem with the same title, it recalls impressions of a long, idyllic summer evening as a child growing up in Tennessee. This dreamy portrayal brings to mind a rocking chair on the porch, a quilt spread on dewy grass and even the hum of a passing automobile. It is considered Barber’s most “American” piece and recalls a simpler, more innocent time.

Westminster Choir College has a strong connection with Samuel Barber and his music. In 1938 Barber set his impressive eight-part God’s Grandeur for the Westminster Choir. Written for the Westminster Choir School’s Festival of Contemporary American music, it was performed during the Choir’s annual winter tour throughout seven states and 20 cities. The College’s relationship with Barber lasted throughout his life until his death in 1981. The Westminster Choir was invited to sing at the composer’s funeral service at First Presbyterian Church in West Chester. Led by Joseph Flummerfelt, the Choir sang Barber’s own Let down the bars, O Death, To Be Sung on the Water, Prayers of Kierkegaard and choral preludes by J. S. Bach.

Dr. Penna was formerly on the faculties of Westminster Choir College of Rider University, the Yale University School of Music, Norfolk Chamber Music Festival and the Bowdoin Chamber Music Festival, where he coordinated the Vocal Arts Program for three summers. He has been a staff member of the Steans Institute for Young Artists since 2000 and a member of the coaching faculty of the Juilliard School since 2006 and the faculty at New England Conservatory since 2019.

The Lindsey Christiansen Art Song Festival is named for former Professor of Voice Lindsey Christiansen, who died in 2017.  A member of Westminster’s faculty for 40 years and chair of the Voice Department for 18 years, Professor Christiansen re-established and managed the festival, which is an important part of Westminster’s performance season and academic program.  She specialized in German lieder and was a life-long student and lover of the music of Franz Schubert. She was an exceptional voice teacher and a demanding professor of song literature classes, where she instilled in countless students a love for song.