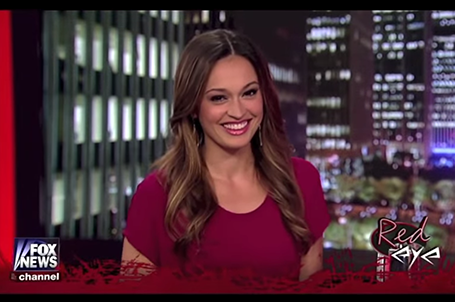 Joanne Nosuchinsky ’10 has made a habit of finding success where she wasn’t necessarily looking for it. She became a beauty queen in 2013 when she was named Miss New York USA, despite never previously competing in a pageant. Now the co-host of Fox’s late-night satirical news show Red Eye with Greg Gutfeld, she steps into the host’s seat on occasion and also helps write the show, even though she started with little experience in either role.

Time for Nosuchinsky, 26, to settle in, right?

“Three years ago I never would have thought I’d be Miss New York, and today I’m still amazed to be co-host of a news show,” she says, adding that careers for budding performers typically take one of two directions. “Either you act or you host, and while I really do love hosting, I don’t think my whole career will be hosting. I have dreams of starring in sitcoms and films.”

Nosuchinsky began appearing on Fox News after she was named Miss New York USA and competed in the Miss USA pageant in 2013. “I gave a millenial perspective on hot topics, and they kept having me back,” she says. She first appeared on Red Eye on Sept. 18, 2013, and, after permanent panelist Bill Schulz departed in November, Nosuchinsky signed on to replace him. The announcement was made Feb. 4, 2014.

Before joining Fox News, she began starring in off-Broadway's The Awesome 80's Prom, which she continues to act in around her hosting duties. The producer of that show recently signed Nosuchinsky, a member of the Actors Equity Association, for a similar project, tentatively called Interactive Reality Spoof and scheduled to open in March 2015. In addition to playing a role (“a bachelorette looking for love”), she’s also helping to write the show.

While Nosuchinsky still appears in stage productions on the weekends, landing a regular gig at Fox has tamed her schedule — to a degree. She now works standard hours, except the day starts around 1 p.m., with taping at 8 p.m.

Nosuchinsky’s background in improv — she was part of an improv troupe at Rider — has helped her on stage and screen. On Red Eye, she has to think on the fly while participating in freewheeling conversations that careen from politics to pop culture to sports. But she does more than appear in front of the camera. She also helps write the shows, even though when she started she had no experience writing for TV. “It was terrifying at first,” she says, because she’s surrounded by writers who’ve studied broadcast journalism and political science and have been doing it for years. An honors student, Nosuchinsky says she’s always loved writing, especially academically in college, but, “Writing for TV is very different from that.”

The late timeslot and satirical format of Red Eye allows her and the other writers to have more fun with the material than a straight news show. “We look to find the funny in every story,” she says, and to do that, she leans on host Greg Gutfield for guidance on sharpening her writing. “He knows what sounds good and how to keep things short. You need to keep the audience’s attention as best as you can. We use a lot of lines, a lot of puns — anything that’s entertaining.”

A Freehold native, Nosuchinsky entered Rider on a full-tuition acting scholarship, where she studied theater and performed in several productions, including Bug, Cabaret and Urinetown. She prizes the individual attention she received at the University, where she grew close with professors — relationships that continue today. “Now that I’m here in New York, I still talk to them,” she says. “Even after you leave Rider, you still have a support system there.”

Nosuchinsky moved to New York City three months after graduating. “I knew I had to be here to pursue my dreams,” she says. “The path that’s getting me to where I want to be has veered, but I’m very happy with where I am right now.”