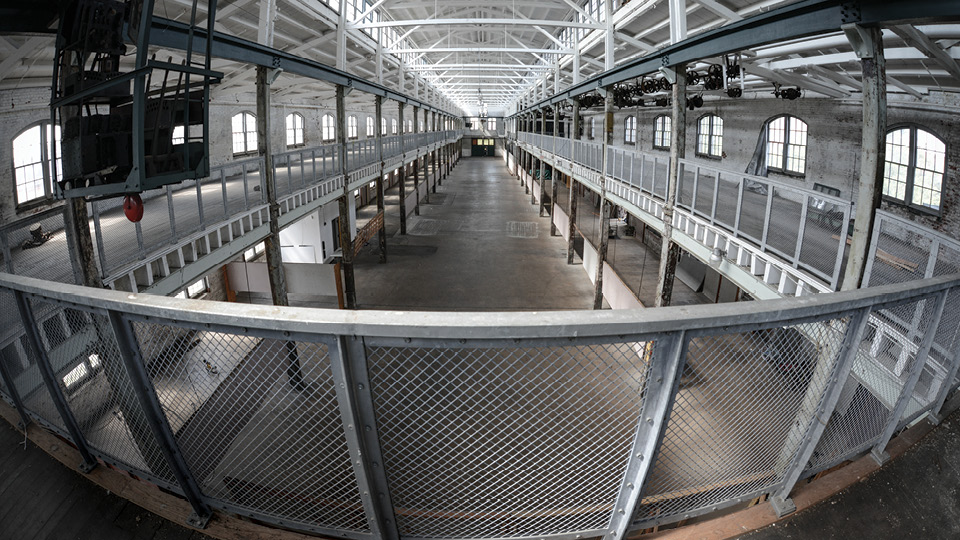 Not only is the appropriation of old edifices a key component of sustainable building, but adaptive re-use has provided some of the most inspiring and dynamic spaces for live performances.

Architectural gems that were once at the center of thriving cities around the world are escaping the wrecking ball and finding new life as arts venues, at the same time revitalizing downtowns. Examples abound, from the Brooklyn Navy Yard, which today houses a motion picture studio, to New York’s Park Avenue Armory with its groundbreaking performance art pieces and Philadelphia Fringe Arts conversion of a turn-of-the-century pumping station into an “industrial chic” theater.

Rider University’s Westminster College of the Arts (WCA) joins the movement with plans to perform the 2015 Pulitzer Prize-winning Anthracite Fields at the Roebling Wire Works factory building in Trenton April 21 and 22, 2017. The site was once the factory where John A. Roebling & Sons manufactured wire rope for the Brooklyn Bridge, the George Washington Bridge, Otis elevators and cable cars. Roebling wire rope helped make possible some of the most important technological achievements of the industrial age: telegraphs and telephones, electrification, deep mines and big ships, elevators and airplanes.

With its soaring space (50,000-square-feet worth!), the red brick building at 675 S. Clinton Ave. is an ideal venue for Anthracite Fields, which addresses issues of labor and industry in Northeastern Pennsylvania around the turn of the 20th century. An oratorio for choir and chamber ensemble by the American composer Julia Wolfe, Anthracite Fields was commissioned by the Mendelssohn Club, Philadelphia’s oldest continuously performing community chorus, and premiered in Philadelphia in 2014. The composition has been praised as “an unforgettably haunting, harrowing evocation of the plight of Pennsylvania’s coal miners, incorporating many musical styles and effectively shadowy visuals” by Los Angeles Times music critic Mark Swed.

“An experience where music, poetry and the arts are put inside a space outside a typical performance hall or church takes on completely new meaning,” says Joe Miller, director of choral activities at Westminster Choir College, as well as conductor of the Westminster Choir and the Westminster Symphonic Choir. “It’s unexpected, and then all of a sudden it’s there, that change of perspective, and it hits you.”

In addition to the two performances of Anthracite Fields, there will be a daytime workshop and educational component. Half of tickets to the performances will be offered free to Trenton residents. The workshop will include a performance for Trenton school children, followed by a Q&A with the choir.

Through “Any Given Child,” a program supported by The John F. Kennedy Center for the Performing Arts that has received endorsement from Trenton Mayor Eric Jackson and Superintendent of Trenton Public Schools Lucy Feria, WCA is the higher education partner for the Trenton Public School System to build its arts curriculum and programs, ensuring that every child in Trenton receives a quality arts education. Rider has just completed a strategic planning process with Trenton for the three-year project that affords Rider education students an opportunity to gain experience in arts education.

The cross-campus collaboration engages music education majors from WCA and the history department from Rider and brings Trenton teachers to the Rider campus for training. “Rider students will go to the Trenton schools and help art teachers transform a space in their schools, producing art exhibits or performances in unusual spaces to see how the community engages with the space, and to demonstrate the power of the arts,” says WCA Dean Matthew Shaftel. 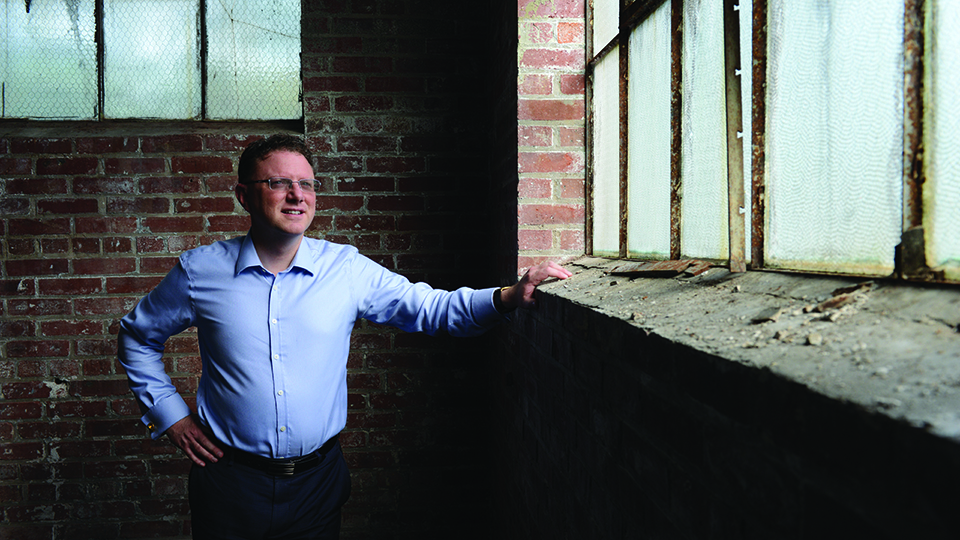 Shaftel, who is celebrating his one-year anniversary as dean of WCA, has put forth a large number of initiatives under eight goals, including new performance opportunities and community engagement. “We have a major initiative to build bridges across campuses,” says Shaftel, who has been conducting meetings, surveys and retreats among faculty, students and alumni to identify top priorities.

While the mission of the Choir College, founded in 1926, has been “Service through music,” with a focus on building community through choral music, a new vision statement for the College of the Arts, established in 2006, is developing: “Inspiring and empowering future leaders and artists to transform their communities through the arts.”

In addition to Anthracite Fields in Roebling Wireworks, two other projects are planned. A performance of Brahms’ “Liebeslieder Waltzes” at the Trenton War Memorial Ballroom, in collaboration with American Repertory Ballet Company, will take place in the fall of 2017. Then, in spring of 2018, a new piece to be commissioned about immigrants who transformed America, will be held in collaboration with Juilliard School of Music at Liberty State Park Railroad Terminus. The first will explore how dance and movement communicate, and an educational workshop for Trenton elementary school children will look at the role 18th-century dance played in the culture of the time, as well as how we communicate through dance and movement. The second, for New Jersey high school students, will engage students in issues of contemporary immigration and migration.

Funding for these projects will come from various sources. The Presser Foundation’s cornerstone grant will support all three Transforming Space projects, as will grant funding from the Arts Project Support program of the New Jersey State Council on the Arts. Additional funding for Anthracite Fields was received from the ArtsCONNECT program of Mid Atlantic Arts Foundation with assistance from the National Endowment for the Arts. Additional requests for contributions are still being sought. WCA also applied for and received a contract from the Kennedy Center’s 2016-17 VSA International Young Soloist: Music for Every Student Program in support of the “Junior Vitamin D Drum Circle” that utilizes culturally relevant rhythms from the African, Brazilian and Latino traditions in a drum circle curriculum designed for students with autism in the Trenton Public Schools. 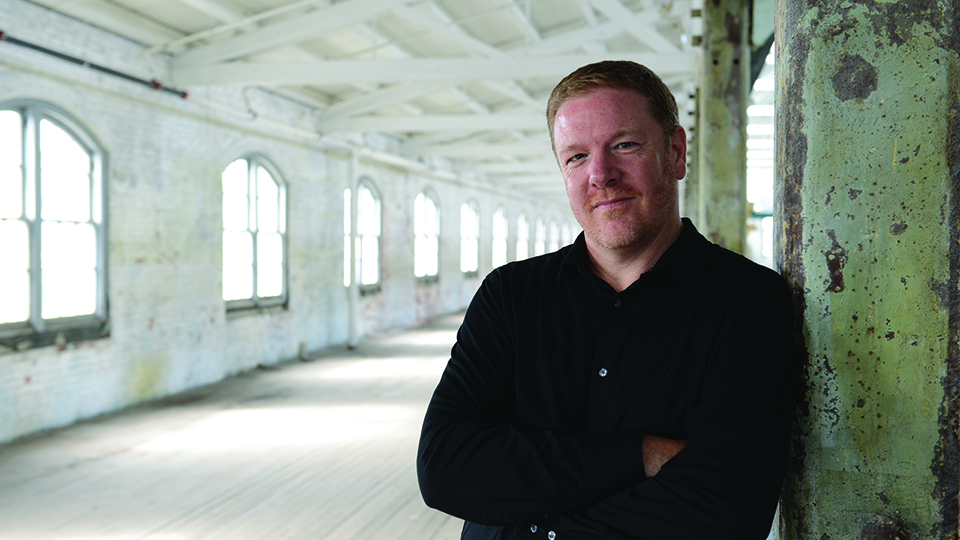 When WCA performs Anthracite Fields at Roebling Wire Works, under the baton of Joe Miller, it will be in collaboration with Bang on a Can All Stars, a six-member amplified ensemble recognized worldwide for live performances and recordings of innovative music that cross boundaries between classical, jazz, rock, world and experimental music. The performance involves a moving choir, staging, and projections of still and moving images as characters search for identity in a post-industrial city.

Through movement, the audience becomes part of the performance. “Anthracite Fields breaks down the fourth wall, bringing the choir to the audience through movement and perspective,” Miller says. “Instead of standing in one place, they will be integrated through movement. It is one of the College’s initiatives, to change the perception of the audience by being surrounded by music. Students will be reacting to the space with their voices and movement, and at times, it will be like living sculpture.” Students are not only transforming spaces, he says, but they are the transformation.

Anthracite is a hard, compact variety of coal that has a submetallic luster. Composer Wolfe grew up outside of Philadelphia, just south of an anthracite mining operation that fascinated her when she discovered it. “These people persevered and worked hard and made a life,” Wolfe said in a video produced by the Mendelssohn Club. “What they did fueled the nation.” She wondered, who are these people whose health and safety are compromised by our dependence on coal for the conveniences of modern life? Anthracite Fields uses threads from their narratives as movements. For example, she narrowed down stories of accidents to those whose first name was John and last name was a single syllable, creating hypnotic lyrics.

Daniel Simpson ’76, who performed Anthracite Fields with the Mendelssohn Club of Philadelphia, is excited that his alma mater will bring it to the Wire Works. “It’s important to have a large space for a large choir that also participates in the choreographed movement,” he says. “The industrial warehouse will be ideal for conveying the bleak, dark utilitarian feel of mines.”

Simpson, who has been blind since birth, says he learned so much about internalizing music through Westminster Choir Conductor Laureate Joseph Flummerfelt that he was able to rise to the challenges of performing with the Mendelssohn Club. Using Braille to read both music and text is nearly impossible unless it has been memorized, as Simpson learned to do at Westminster. For Anthracite Fields, adding movement meant it was even more important to internalize.

“We weren’t expected to do intricate choreography, but there are gestures that enrich the whole piece — like moving through a vine, or en masse, then coming together to show solidarity,” he says. “Sometimes we moved our hands in the spirit of the music, or bent over to show the backbreaking work. Or it was symbolic, like putting our hands over our hearts as we chanted names of those who died in mining accidents. The demands I had at Westminster were wonderful preparation.” 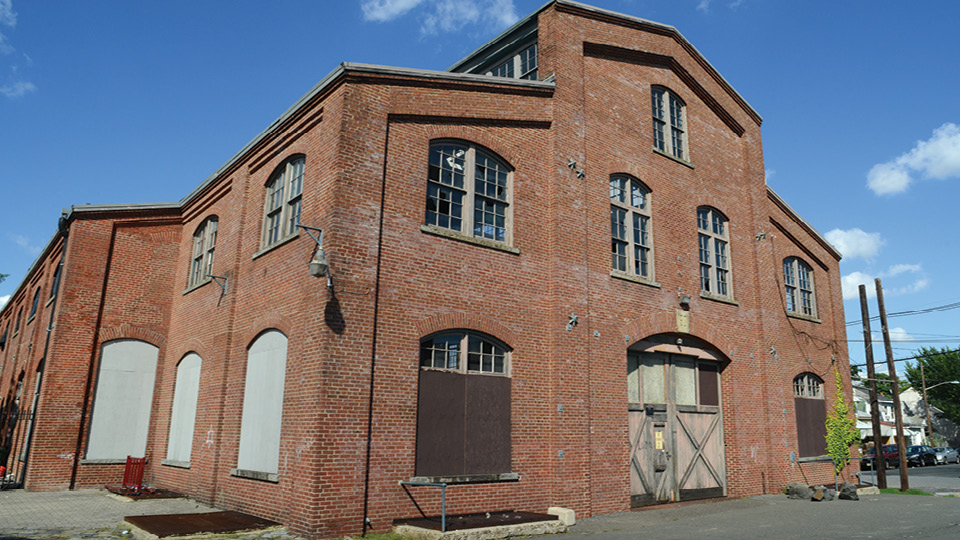 Transforming Space and the Kennedy Center projects with the Trenton Public Schools are only part of WCA’s Community Engagement Initiative. Westminster has also developed a community music room at the HomeFront Family Preservation Center, where women with children who have temporarily lost housing seek shelter and social services. The music room offers instruments, classes and performances by Rider students and faculty, fostering early childhood exposure to music through playing an instrument or participating in a group sing.

Another aspect of Community Engagement is the Neighborhood Choir for underprivileged youth at the Princeton Family YMCA. Westminster’s music education students work one day a week after school with youth recruited through the YMCA and local schools for low-pressure opportunities to share music making. “It gives the student something to be proud of,” says Shaftel.

Yet another event in the Community Engagement Initiative, Opera Then and Now, will take place at Thomas Edison National Historical Park in West Orange, N.J., where, through a prestigious NEA grant, middle and high school students from underserved districts will learn how original wax cylinder recordings were created. Students will tour Edison’s Music Room, listen to archival opera recordings made by Edison in the 1920s and 1930s and hear the same works performed live by CoOPERAtive Fellows, students enrolled in Westminster’s CoOPERAtive opera training program.

The Yale University alumnus — he earned bachelor’s, master’s and doctoral degrees there in music, education and theory — sees a future in which entrepreneurialism becomes an important part of the music college design, with many more graduates creating startups than getting orchestra jobs. “More money and more positions are in the nonprofit than the for-profit sector, and this represents an ideal opportunity for artists to change the community with their portfolio careers,” he says.

Through the new community engagement and transforming spaces initiatives, students will be better prepared to change their communities through the arts. “When students have experiences outside of the norm like performing in the Wire Works, they will take these ideas with them as they become performers and conductors and teachers,” says Conductor Miller.