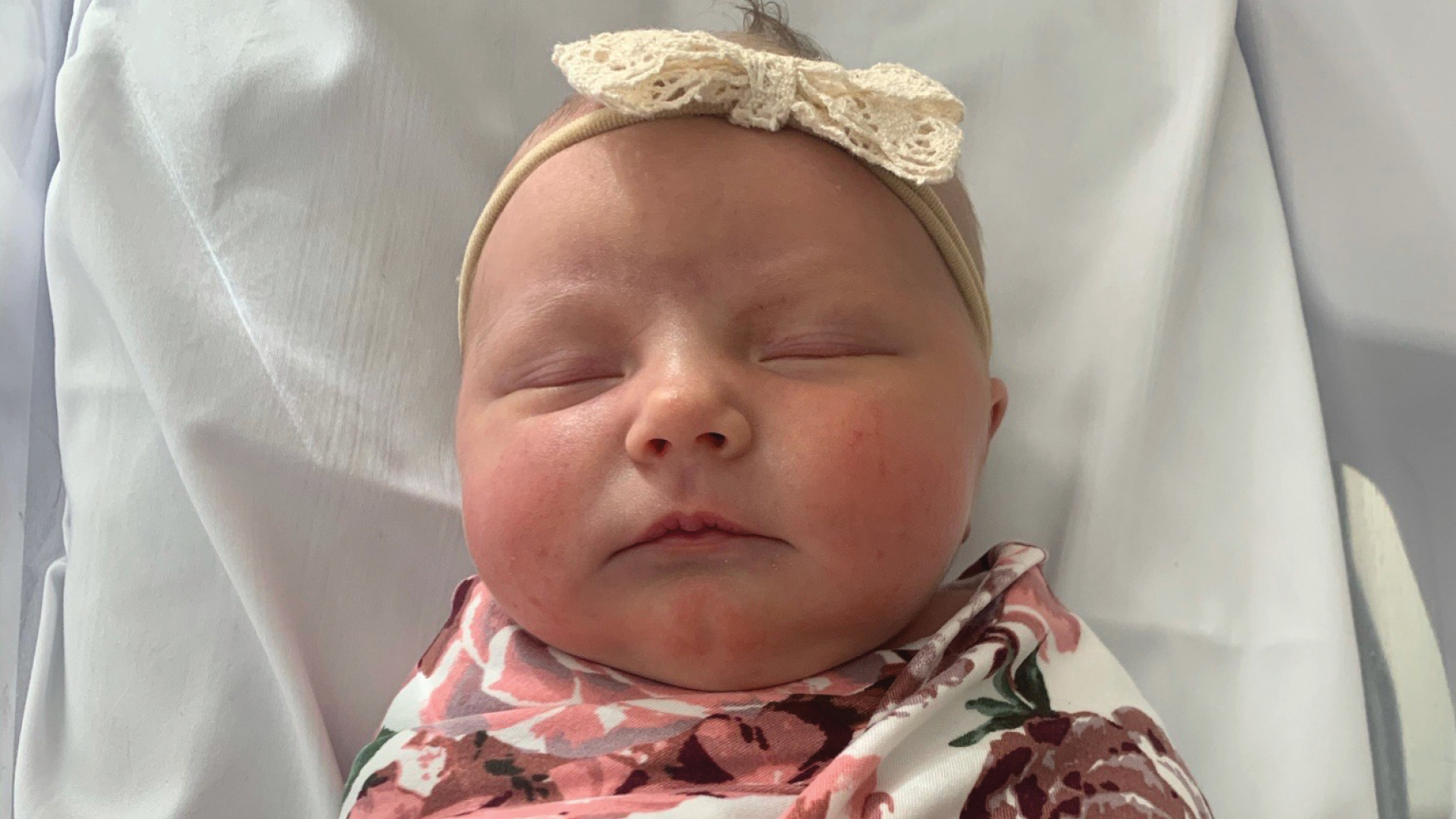 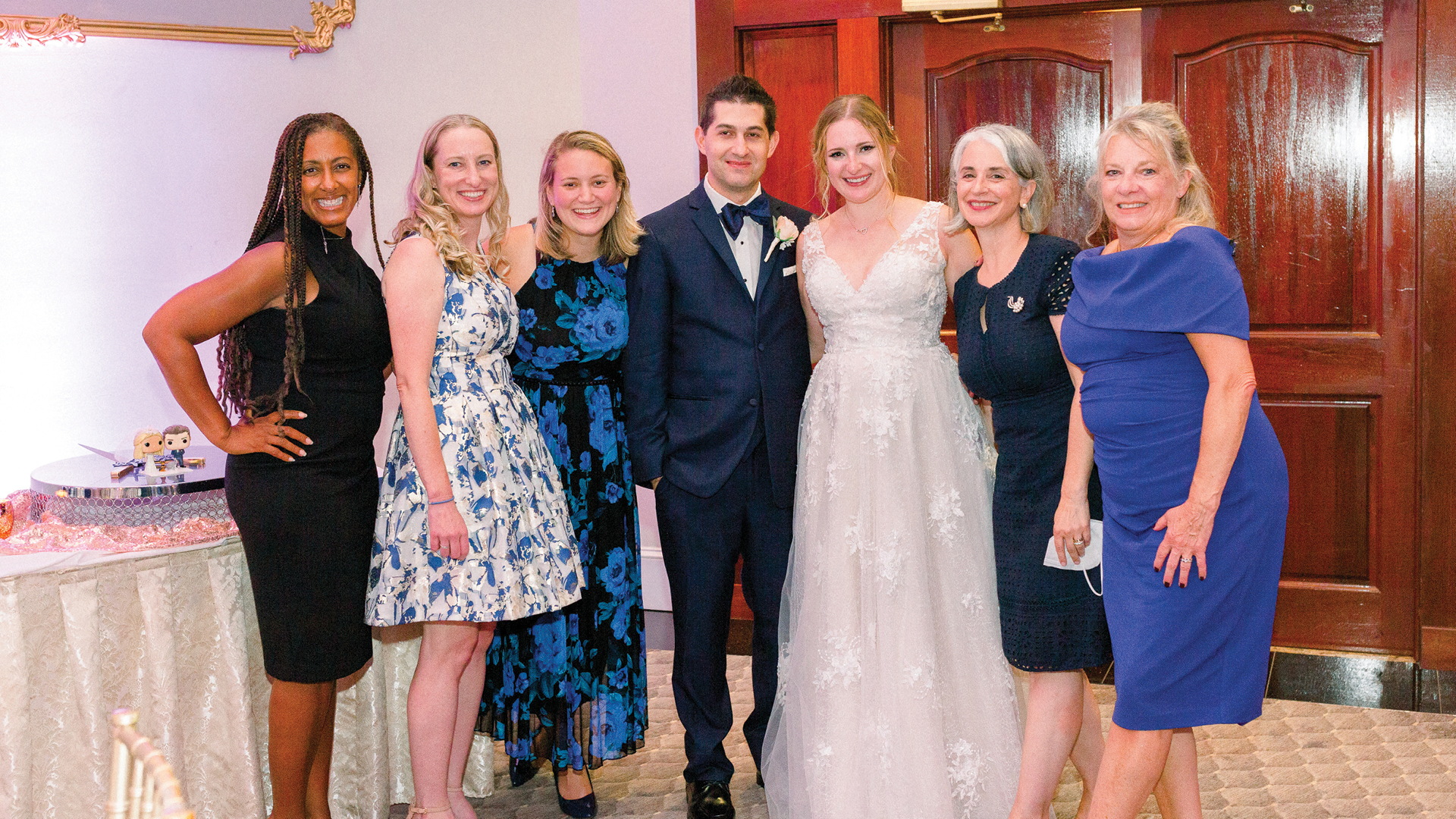 Steven Wyrwas ’16 and Alexa Wyrwas (née Caplinger) ’16, ’20 were married on Aug. 14, 2021. Several faculty and staff of the Norm Brodsky College of Business were in attendance. From left to right, Elizabeth Carrion, Jaime Hall, Lisa Rufer, Patricia Adams and Mariann Ubry. 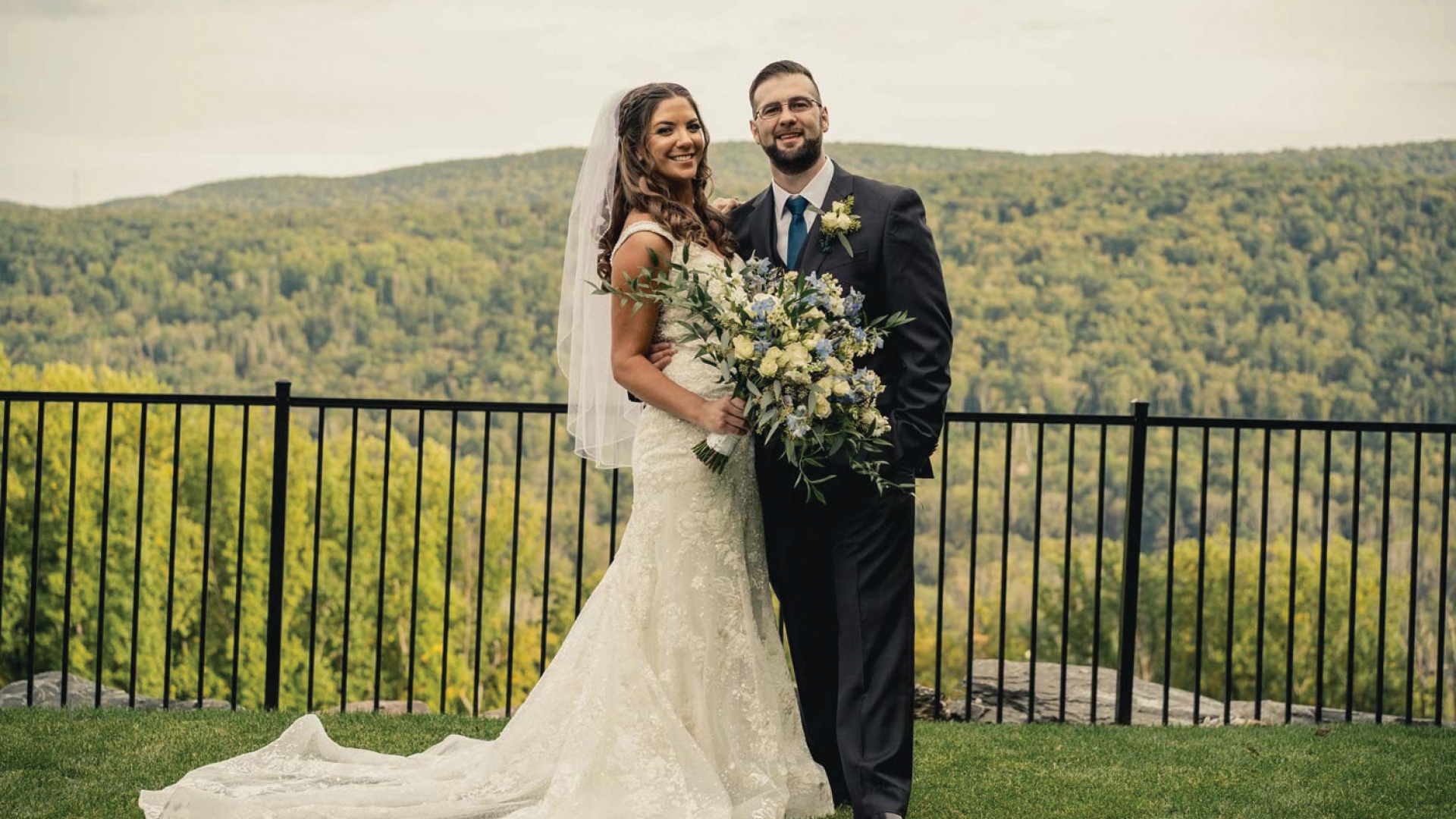 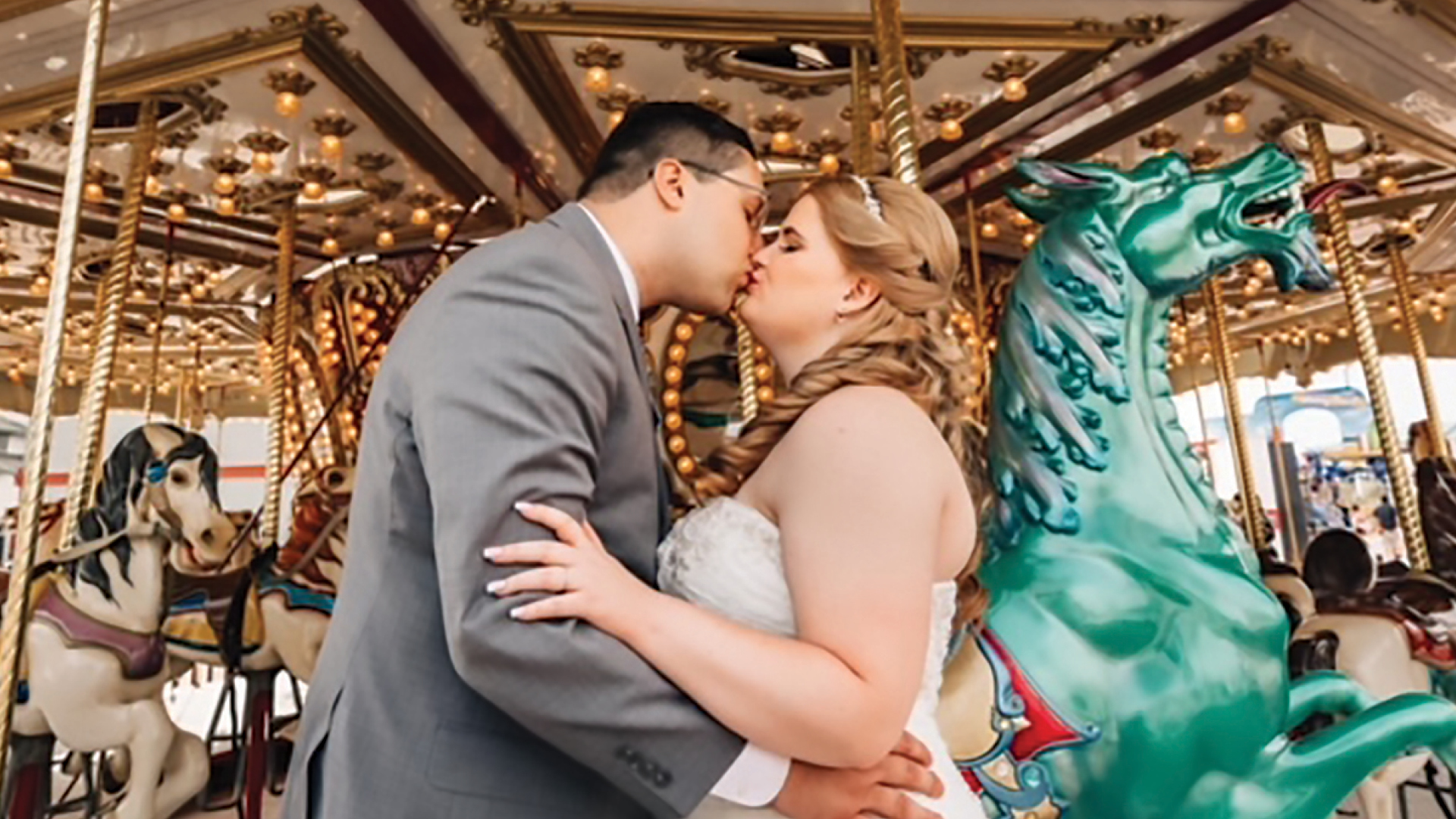 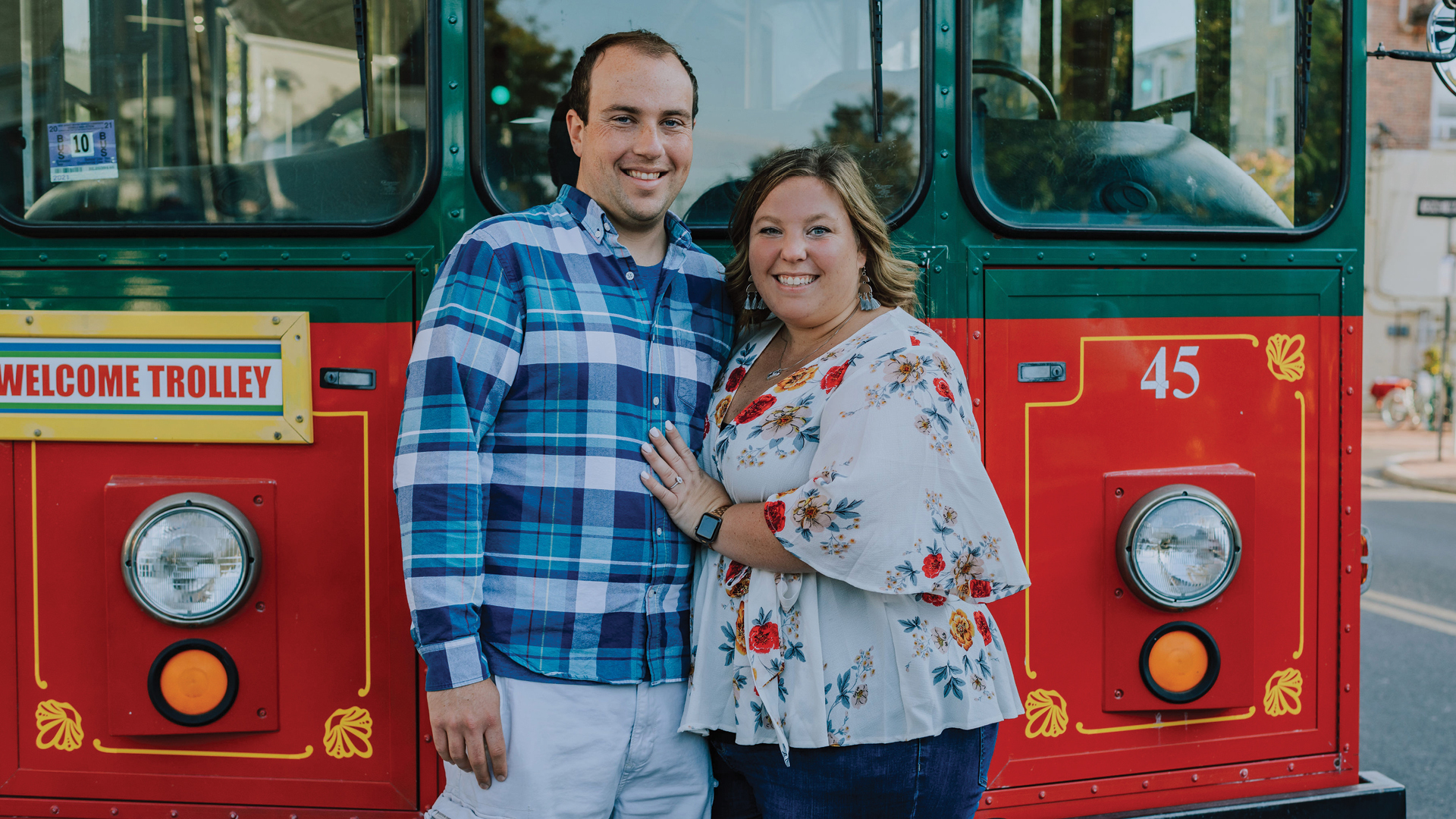 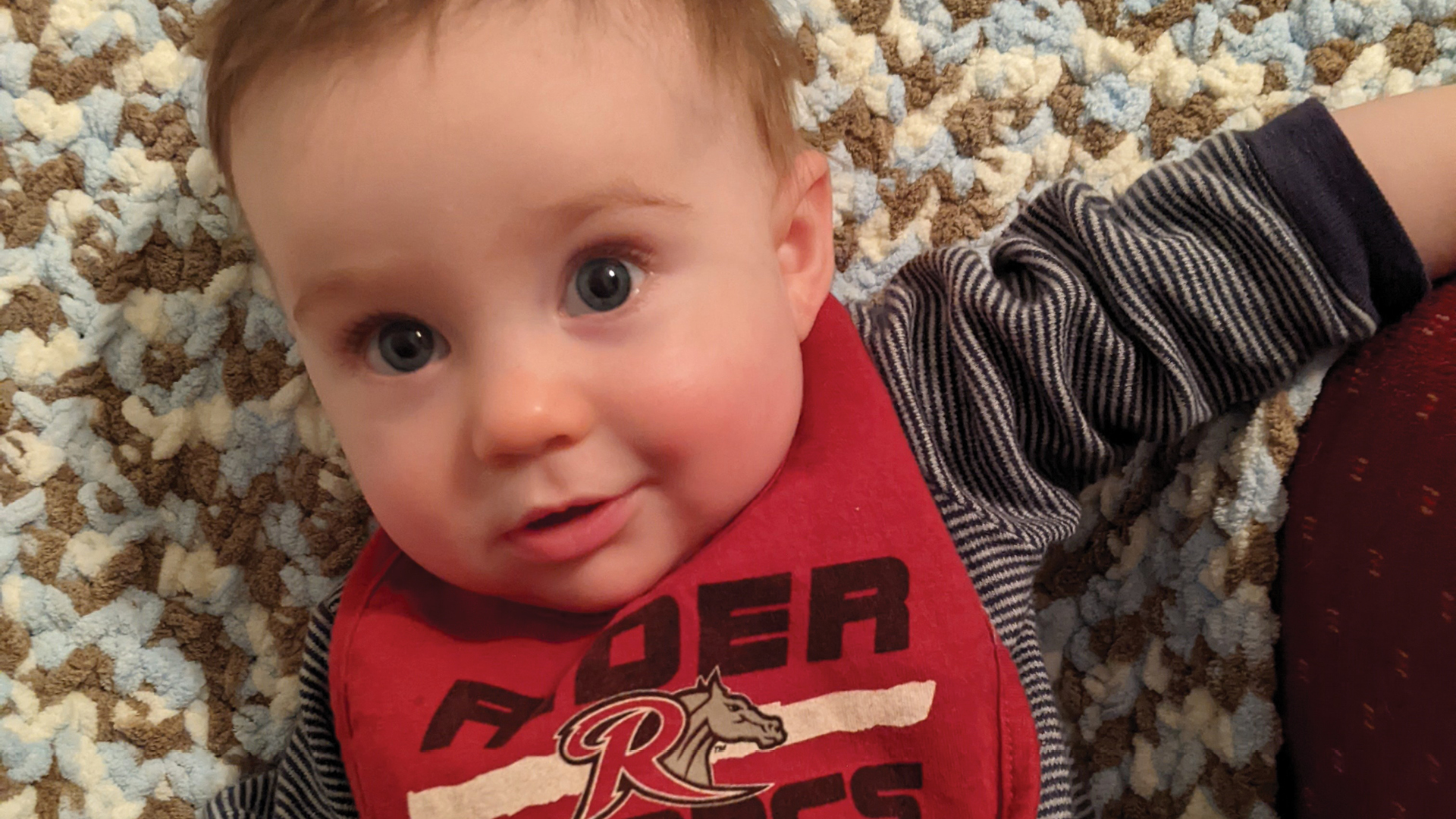 Kel Werner-Vallery ’14 and Adam Werner ’12 welcomed Wesley Werner on June 2, 2021. Kel and Adam met on a business trip in Cincinnati and can’t wait to bring their their baby Bronc to their favorite city. 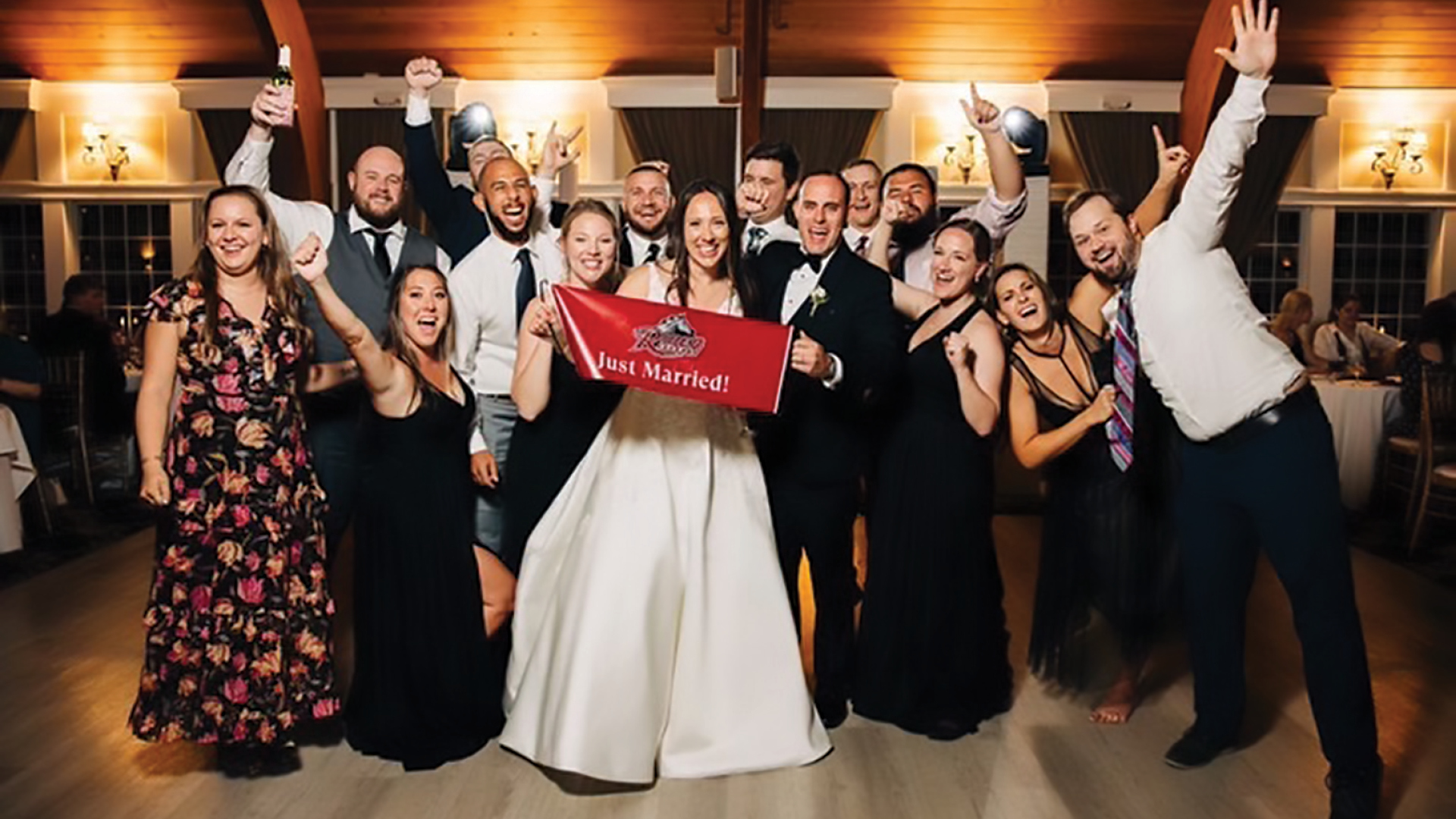 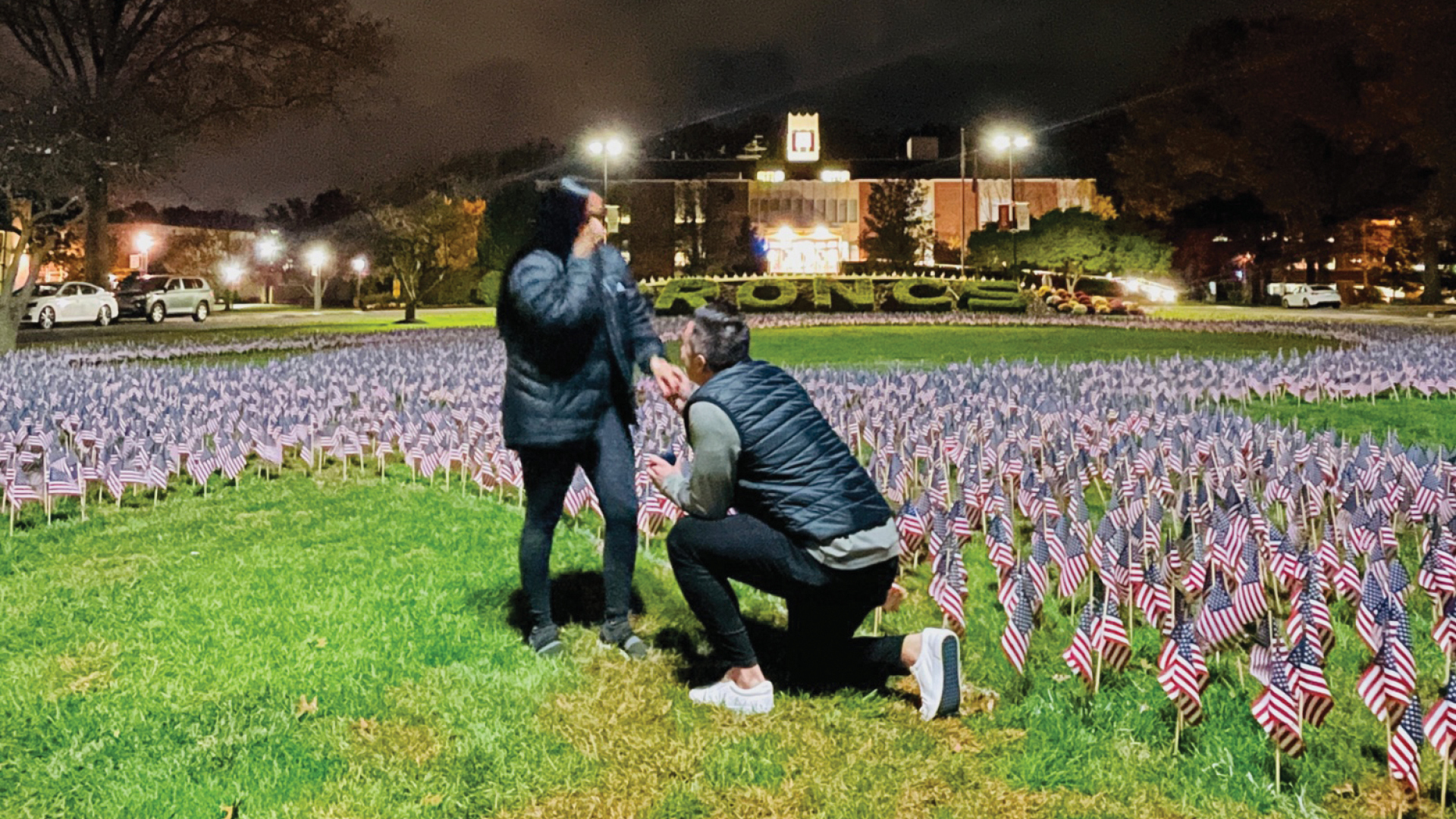 Lauren Pileggi ’12 and Daniel Friga ’13 became engaged to be married on Nov. 11, 2021, on campus. The couple returned to watch a men’s soccer game, with a nostalgic stop at Varsity Pizza for dinner first. Before the game, Friga proposed in front of the flags displayed on the Campus Mall for Veterans Day. 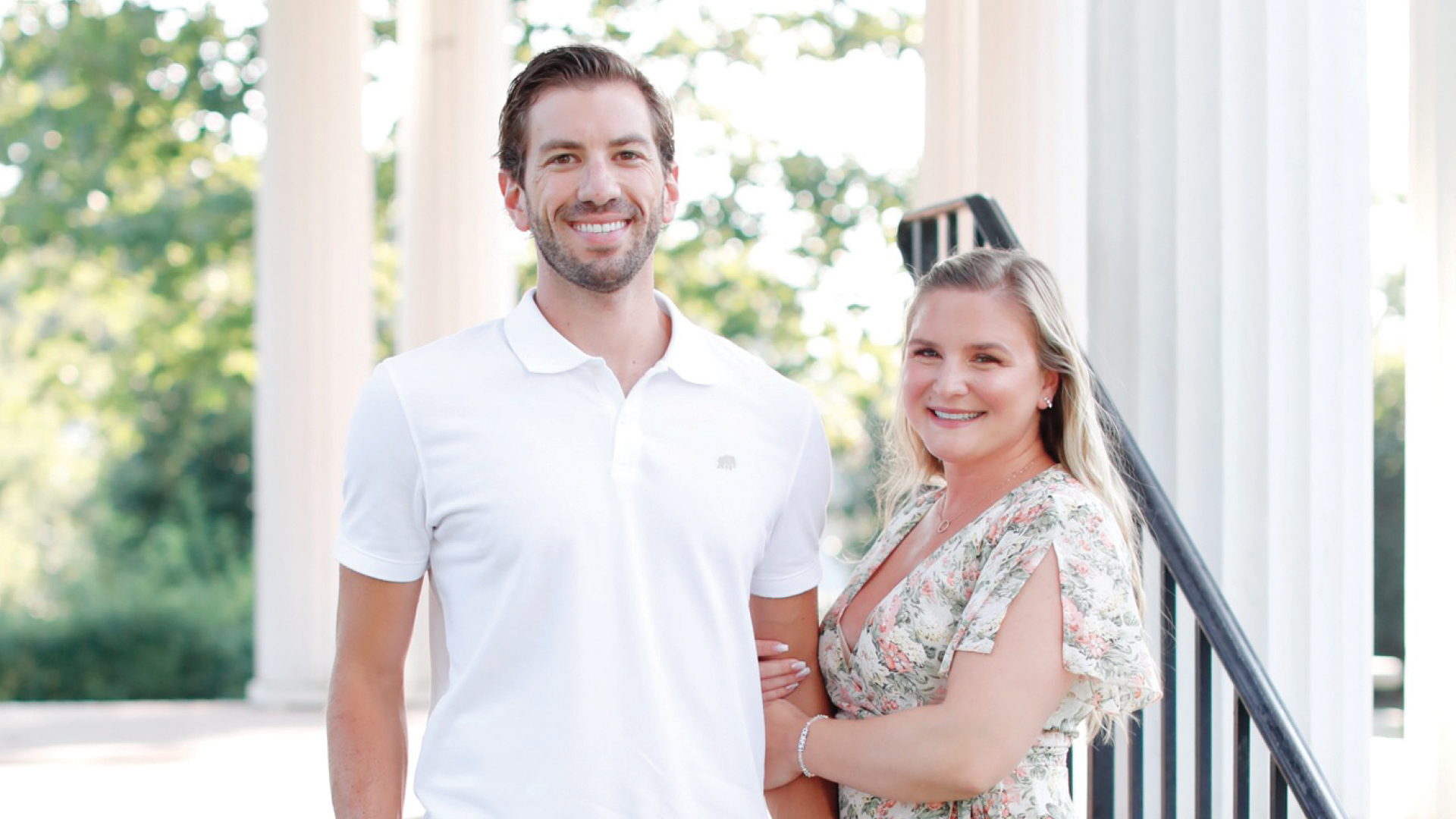 Chris Caruso ’12 proposed to Allison Russo ’12 on May 1, 2021. They met as freshmen in Conover Hall and began dating their senior year. The couple are celebrating nine years together and are set to marry on May 14. 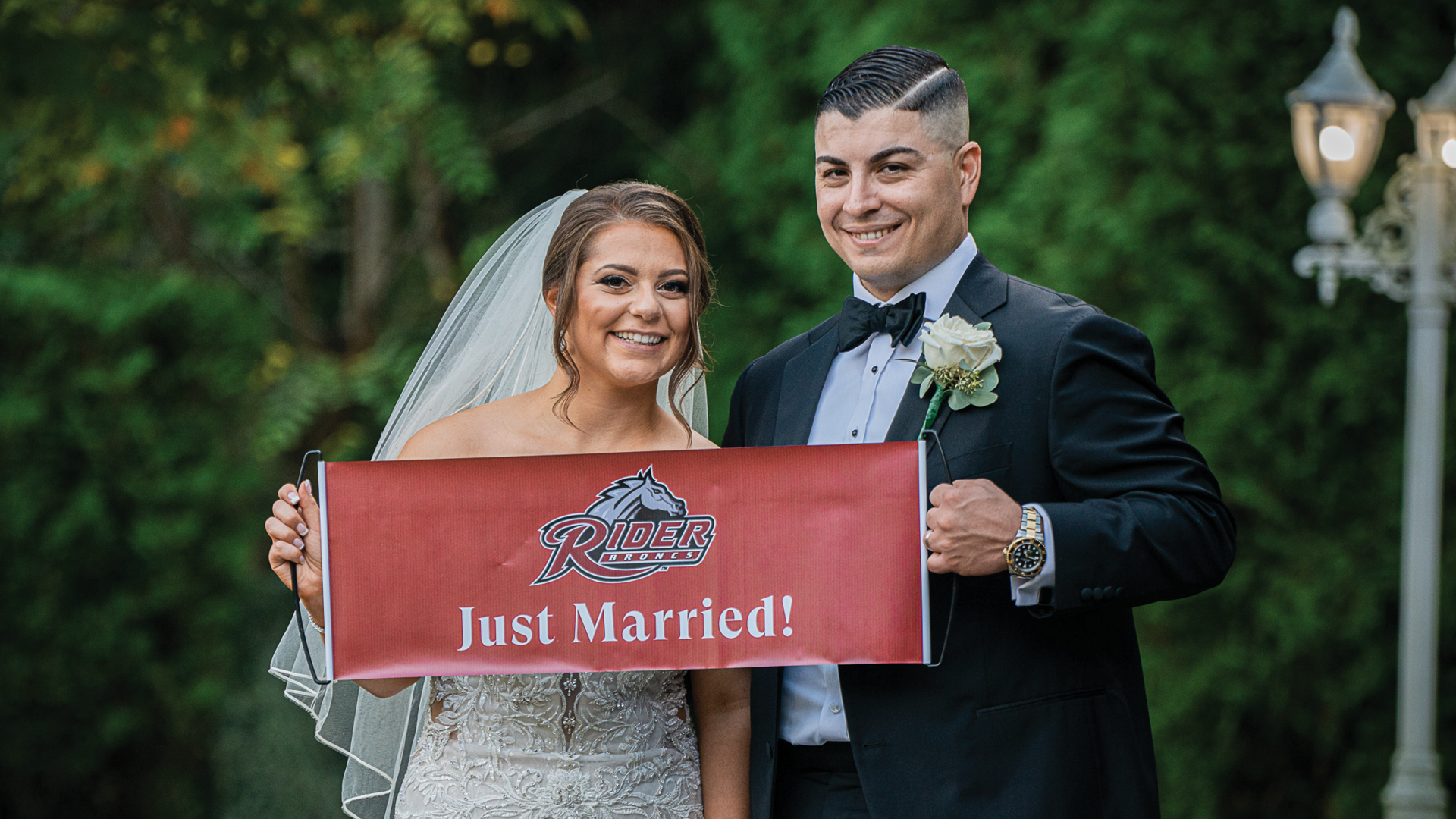 Glenn Albano ’71 and Jim Barrett ’71, who played on Rider’s basketball team as undergraduates, were back on campus celebrating the 50th anniversary of their graduation on Nov. 6, 2021, during Homecoming.

Yin Chung Becker ’85 was named to the list of Top 100 Women Leaders of New Jersey for 2021 by the website Women We Admire. Becker, the vice president and chief corporate affairs officer of Stryker, ranked No. 12 on the list. She earned a bachelor’s degree in psychology from Rider.

Eileen Wirth ’88, ’95 was named to South Jersey Biz magazine’s list of top CEOs and CFOs. She appeared on the cover of the publication — the only woman among four men. Wirth is the president and CEO of Moorestown Ecumenical Neighborhood Development (MEND). Appointed in 2020, she is the first woman to hold that title in the organization’s history. She received a bachelor’s degree in business administration and a master’s degree in finance from Rider. In addition to those degrees, she is a certified property manager, a designation earned from the Institute of Real Estate Management.

Alice Funk ’86 joined the TriCounty Area Chamber of Commerce in Pennsylvania as programs and member engagement director on July 26. In the role, Funk is responsible for planning, managing and facilitating all events and programs that will help develop and maintain chamber membership, including awards dinners, training and leadership programs, networking and business card exchange events, and ribbon cuttings. Funk received a Bachelor of Arts in Journalism and Public Relations from Rider and a Master of Arts in Corporate Communications from Fairleigh Dickinson University.

Carl Sutter ’89 was named Zurich North America’s head of distribution for U.S. middle market. He received a bachelor’s in business administration from Rider.

Michael Golembiewski ’93 was named the chief financial officer of Seelos Therapeutics. He received a Bachelor of Science in Accounting from Rider and is a certified public accountant.

Bradley Hill ’93 retired from the Willingboro Township Police Department as a lieutenant. He served the New Jersey community for 25 years. Hill earned a bachelor’s degree in business administration from Rider.

Timothy J. Cunningham ’94, ’96 was named the new business administrator of Camden, New Jersey, in January. Cunningham earned a law degree from Rutgers-Camden School of Law after he received a master’s in business administration and a bachelor’s in accounting from Rider. He has previously served as director of the New Jersey Division of Local Government Services and assistant commissioner for the state Department of Community Affairs during the administration of New Jersey’s former governor Chris Christie.

Kelly Neiman ’98 is currently working toward completion of a Doctorate in Education from Holy Family University. The research she is conducting for her dissertation involves collecting original lessons from K-12 teachers in New Jersey and Pennsylvania to examine the use and alignment of English language arts standards in lesson plans. Neiman received a master’s in educational administration from Rider, as well as a bachelor’s from La Salle University.

Laquita Mitchell ’99 was named Artist of the Week by OperaWire in January. She performed the title role in New Orleans Opera’s performance of An Homage to Josephine Baker. Mitchell received a bachelor’s in music education from Westminster Choir College.

Larry Steenvoorden ’00 was named chief financial officer of Chembio Diagnostics, Inc., a point-of-care diagnostics company focused on infectious diseases. A certified public accountant, he received a Bachelor of Science in Accounting from the University of Delaware and a Master of Business Administration from Rider. In previous roles, he served as senior director at Accordion Partners, chief accounting and financial officer at Onyx Renewable Partners and global controller and vice president, business planning and controlling at Siemens Healthcare Diagnostics.

Leonard Harris ’03 was named executive vice president of the Gateway Regional Chamber of Commerce, one of the largest business associations in the New York/Northern New Jersey region. Harris earned a Bachelor of Science in Management from Rider.

Harold Laudien ’03 recently completed two long-distance running challenges. One was an 81-mile desert run in an area of California called Salton Sea, where two runners partner and cannot be separated as they climb 9,000 feet. The second was a 135-mile continuous ultra marathon called the Brazil 135, which features an ascent of 30,000 feet. Laudien finished in 57 hours. At Rider, Laudien earned a bachelor’s in organizational behavior and management, with a second major in business administration and a minor in entrepreneurial studies. In 2010, he founded Mercer Wealth Management, a firm dedicated to serving those who have traditionally been undervalued or underserved in personal finance.

Jerry Johnson ’05 was elected to the Lancaster County Sports Hall of Fame. On the men’s basketball team at Rider, he was a three-time team MVP and a three-time All-MAAC First-Team selection. He was inducted into the Rider University Athletics Hall of Fame in 2013.

James Hooven ’08 was named president of the engraving segment of Standex International Corporation, the company announced in August 2021. He received a Bachelor of Science in International Business from Johnson & Wales University and a Master of Business Administration from Rider.

Rhodalynn Jones ’10 was selected as the new human services director for Princeton Township. She received a bachelor’s degree from Rider and a master’s from Liberty University.

Petra Gaskins ’15 was named the next director of the New Leaders Council – New Jersey (NLC-NJ), the local chapter of the nation’s largest organization that recruits, trains and promotes a rising generation of progressive leaders. Chief of staff to Assemblyman Andrew Zwicker, she was a New Leaders Council Fellow in 2016.

Elieza Bague ’20, ’21 is a social media producer for Advertising Specialty Institute. She earned her bachelor’s in marketing and her master’s in business administration from Rider.

Rhea Fryer ’21 is a staff assistant for Sen. Cory Booker. At Rider, she was a political science major.

Kate Nash ’22 has accepted a full-time position with Johnson & Johnson as a Global Operations Leadership Development (GOLD) Program Associate. For the next 2 1/2 years, she will rotate through three different operational roles within the company, starting in the medical devices sector in Irvine, California. Nash was a double major in business analytics and global supply chain management at Rider.