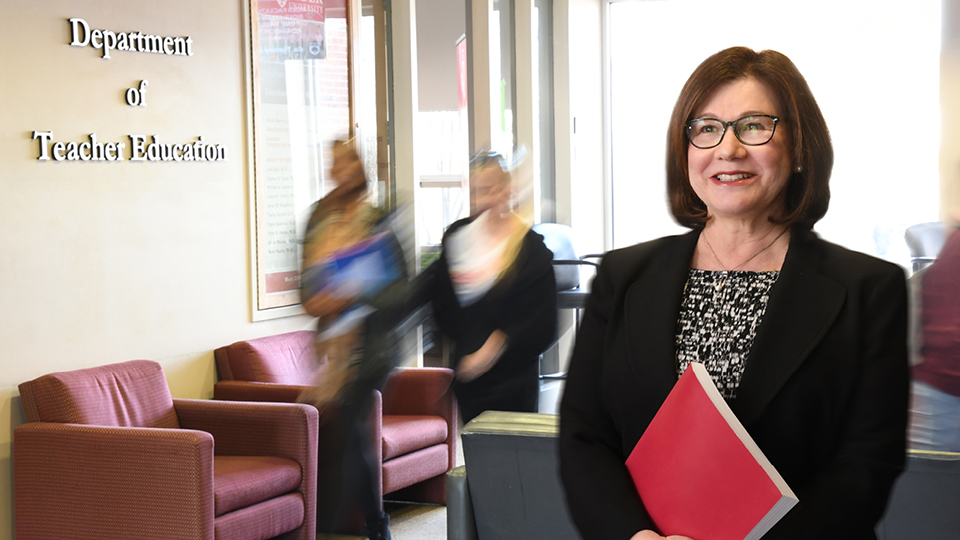 One day last December, Dr. Sharon Sherman stood on the stage of the Bart Luedeke Center Theater on Rider’s campus and listened to the provost read a list of her many accomplishments as dean of Rider’s College of Education and Human Services.

Sherman was about to receive the Provost's Initiative Award, and the provost, Dr. DonnaJean Fredeen, told the audience that last year, under Sherman’s leadership, students of the College of Education and Human Services had achieved a 100% passing rate on two critical teaching assessment tests, Praxis and edTPA.

“Next year,” Sherman interrupted, “we’re going to do better.”

The glint in her eye was visible from the back row. The joke may have elicited a few chuckles from the faculty and staff gathered in the theater, but its spirit captured something about Sherman as true as grades being due at the end of the semester: She is devoted to student success and willing to do whatever she can to empower them to achieve their goals.

Now, Sherman is finally giving herself an extended break. In January, Rider announced that she will step down from the position of dean and, after a leave of absence that will allow her to write a book (her 11th), return to the faculty. Retirement does not appear to be in her vocabulary.

“I miss teaching and working directly with students,” Sherman says during a wide-ranging interview in her office inside Bierenbaum Fisher Hall.

While Sherman has held a multitude of positions during her long career in education, many of them have been at the head of a classroom. She was a professor at The College of New Jersey for 14 years before she received an unsolicited phone call from a recruiter that a dean’s position had opened at Rider.

No way, Sherman recalls thinking as her initial reaction. “I was perfectly happy,” she says. “But the recruiter contacted me several times and convinced me to meet the search committee.”

Sherman struggles to articulate exactly what happened during the interview process that swayed her to change her mind and accept the position other than to say it was an emotional connection with the University.

“Students always tell us the same thing: ‘I stepped foot here on Rider’s campus and I felt the warmth and camaraderie and knew it was a match,’” she says. “That’s what I felt with the search committee.”

Sherman believes the business of educating educators has grown increasingly complex over time, especially with the changing federal and state mandates and tougher accreditation standards over the past decade. She hopes the book she plans to write will help prepare deans to understand that complexity while dealing with the overall headwinds roiling higher education, such as the rising cost of tuition and the nationwide shrinking pool of college applicants.

Despite those challenges, Sherman has, since becoming dean, amassed an impressive record of accomplishment. Under her leadership, the College of Education and Human Services earned multiple accreditations, including, crucially, from the National Council for the Accreditation of Teacher Education and the Council for the Accreditation of Educator Preparation. Counseling programs and the school psychology program also received important accreditations. In 2017, she helped the College launch Rider's first doctoral program, in educational leadership. Many programs developed online options. As dean, Sherman became a nationally recognized innovator in STEM teacher education, with White House invitations under her belt to prove it.

"Dr. Sherman has been relentless in her efforts to ensure the success of Rider's College of Education and Human Services," says Provost Fredeen. "Her dedication and single-minded drive have truly served the best interests of our students and the entire University. To say that I will miss her leadership as a great Rider University dean is an understatement."

To understand Sherman’s, drive and spirit you have to understand the story of her family.

She grew up in the housing projects of the Bronx with her mother, father and sister. The apartment's sole bathroom was so small Sherman says you could barely turn around in it. But there was always room for the hobbies of Sherman's father, Max, an inveterate and skilled tinkerer and inventor whose formal training as an engineer was cut short when he left college to fight in World War II. Spare parts were regularly scattered across the living room floor. Sherman says her father once built the family a working television and that he was constantly fixing and rebuilding car engines.

Both he and Sherman's mother, Gert, who worked as a bookkeeper for her family’s successful bakery, were born in the U.S., but her grandparents emigrated from Eastern Europe in the early 1900s during challenging political times. During her childhood her grandparents shared stories of their journeys to the promised land and the many obstacles they had to overcome.

“They taught me to deal with whatever challenges life brings, never to give up, to push on and look for the bright side even when there doesn’t seem to be a bright side,” Sherman says. “That was instilled in me. It taught me that you had to have reasonable goals and that you may have obstacles in pursuing those goals but you do your best to overcome them. My mother always said that when things don’t go as expected, you have to pick yourself up, regroup and go on. It’s about empowering yourself.”

In her office, surrounded by the trappings of a successful career, Sherman continued, “I am grateful for my ancestors every single day.”

Sherman never planned on becoming a teacher. Her passions as a youngster were science and music.

She excelled in the New York City public school system, which, even after a career immersed in inspiring educational excellence, Sherman describes as “first-class.” She skipped third grade. In fourth grade, she and a friend won a citywide science fair, snatching up tickets to see Ben-Hur as the prize. Interested in music, she spent most of her youth playing the violin and piano. But her main pursuit in school was chemistry.

“At the time, this was not a subject any girl should like — you were either going to be a teacher or a nurse,” Sherman says.

Despite her aptitude and talent, she didn't receive much encouragement from either parent to attend college after graduating from high school. (Neither of them grew up in a culture that expected females to attend college.) But Sherman was determined to pursue her education in chemistry.

“I didn’t have a lot of choices,” she says. “I needed a school I could commute to.”

She enrolled at New York University. “I was the only female in most of my advanced classes,” she remembers. “I was first-generation, like many of our students at Rider.”

Because she was paying her own way, she pursued and earned a certificate that would permit her to work as a substitute teacher in districts throughout New Jersey during the day, with nights reserved for classes and study.

The decision inadvertently set her on a new career path.

Since graduating from college, Sherman's career has been defined by holding many different jobs within the field of education.

The first job she was offered after she received a bachelor’s was as a high school chemistry teacher. She had earned a good reputation as a substitute teacher, and even though her ultimate dream was to enroll in medical school, she accepted the job.

“I had no formal teacher preparation at all,” she says. “I was the ultimate alternate route candidate.”

She was also already married (at 19) to a man she had met as an undergraduate. At the time, Alan Sherman was a doctoral candidate at NYU. They had moved to East Brunswick in New Jersey by the time Sharon became a teacher, with her husband teaching at Middlesex County College.

Today, Sharon and Alan have two sons, two daughters-in-law and six grandchildren. Their first son, Rob, was born when Sharon was 25. Mike was born three years later. Two days after Rob was born, Sharon and Alan’s first book, Basic Concepts of Chemistry, was published by Houghton Mifflin. Over the years, six editions of the book were published, and it was translated into Spanish and Japanese. “Our sons grew up in a house where writing was the norm,” Sharon says. “Both of them are authors and we joke that we’re waiting for the next generation of Sherman writers and authors to emerge.”

Like many parents, having children deepened Sherman’s connection with the local educational system. First, she became the president of her son’s school’s PTA. Later, when an opening on the school board in North Brunswick became available, Sherman realized no candidates represented her status as a young mother. She entered the race and won.

Over the next couple of decades, Sherman moved on from high school to elementary and middle school education. She made time to earn a master’s in science education and a doctorate in educational administration and supervision from Rutgers University. She taught at community colleges and four-year universities. She worked at the New Jersey Department of Education. She co-founded centers, raked in significant grant money, served as a department chair and created new academic programs. She continued as a researcher, publishing articles and books. She became a director for prestigious institutional programs, including at Princeton University.

Asked why she put her hands in so many pots, Sherman says, “I like adventure, and I let the adventure happen. I embrace change as a way to keep learning. It is because I’ve had so many diverse experiences that I can put the pieces together and understand the full picture of the enterprise of education.”

Driving all of those activities is Sherman’s simple yet powerful belief in the power of education.

“Nothing is more important than having a good teacher, because teachers change lives,” she says. “And they’re responsible for our futures. Aside from caregivers, they spend the most time with children and adolescents. You can probably ask anyone who has gone through life about a teacher or professor who changed their life.”

Sherman swells with pride when discussing the dedication of her faculty and the special connection they have with their students and alumni. In speaking about that bond, Sherman is also, in a way, speaking about her own connection to the University.

“Rider is for a lifetime,” she says. “Rider faculty and staff are there for their students not only while they’re here, but after. That’s what Rider is all about. I think that’s what I felt in that room when I interviewed for the dean’s job. It’s an aura. It’s magic.”

Having concluded a long interview reflecting on her life and career, Sherman gets up and walks into the dean’s suite. There's much to attend to. She has to get back to work.