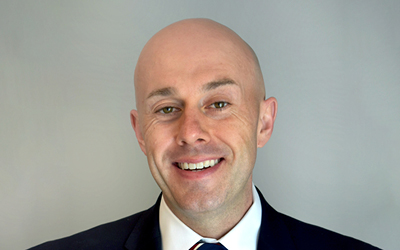 From even the farthest reaches of the Garden State, the Jersey Shore is easily within driving distance. Its proximity doesn't feel so close though if you ditch your car and instead travel on foot.

That's exactly what Harold Laudien '03 chose to do last October, when he departed from one state border, the Delaware River near Washington Crossing State Park in Titusville, and began running toward another, in Belmar. The nearly 53-mile trek took him 9.5 hours to complete, with News 12 New Jersey there to capture Laudien celebrating the end of his solo double marathon by splashing into the Atlantic Ocean.

Laudien's long run was part of his efforts to raise awareness and money for Team PHenomenal Hope, a nonprofit that assists people diagnosed with pulmonary hypertension, an incurable disease of the heart and lungs that leaves people short of breath, fatigued and in pain.

His friend and colleague Kirsten Braley was diagnosed with the disease in 2017, and since then, Laudien has pledged to, in his words, “do something a little crazy” every year to support her.

“She has family and friends and others who support her in more traditional ways,” Laudien says. “I wanted to show her that I cared by providing an untraditional form of support. Otherwise, for me, it wouldn’t seem like I was doing enough.”

For his first effort at raising money for pulmonary hypertension, in 2018, Laudien completed a three-day triathlon in Florida, which saw him run, swim and bike across 300 miles.

Laudien has long pursued his idiosyncrasies and personal visions. He was a serial entrepreneur even before he arrived at Rider in 1999. As a child, he sold soda to people stuck in traffic at Raceway Park in Old Bridge, N.J., and, later, sold trading cards at the Englishtown Auction. At 16, he opened a storefront in Jamesburg, N.J., selling gifts and novelty items (“My father had to sign the lease,” Laudien says), and then he started an auto detailing and customization business.

Attracted to Rider’s longstanding reputation for business, Laudien didn’t bother to apply to any other schools. He completed a bachelor's in organizational behavior and management, with a second major in business administration and a minor in entrepreneurial studies.

Upon graduating, Laudien held finance and accounting positions at Jasna Palana and Merril Lynch before once again striking out on his own. In 2010, he founded Mercer Wealth Management, a firm dedicated to serving those who have traditionally been undervalued or underserved in personal finance.

“The field is complicated and constantly evolving,” Laudien says. “It’s not something that’s taught to people, but it makes a big difference in people’s lives.”

Like the result of running “crazy” marathons and triathlons for charity, Laudien likes that, through his business, he can see the positive impact he’s making on other people.

“That’s what keeps it interesting,” he says.