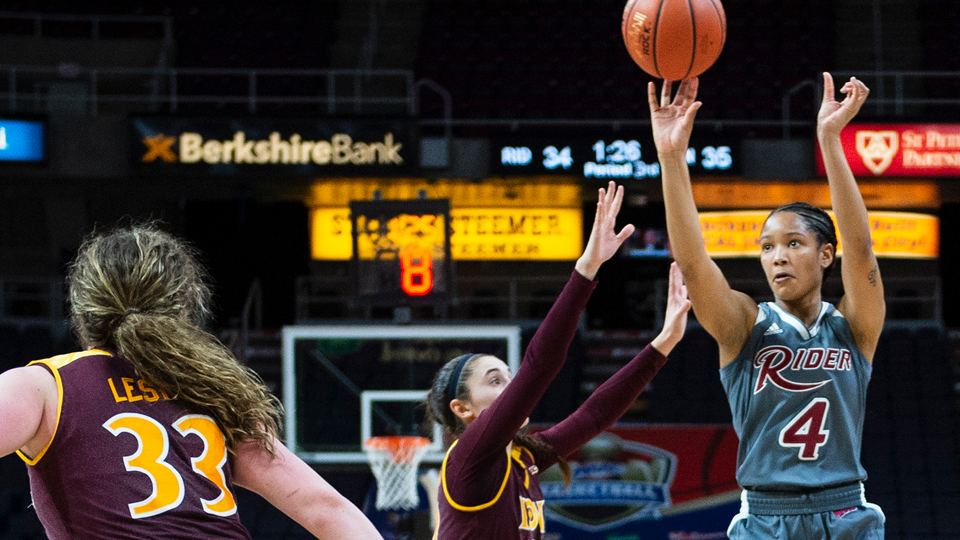 The 5’ 10’’ senior guard from Denville, N.J., can shoot, drive, pass, rebound and defend, but it's her scoring that draws the most attention. For most of the season, she's been leading the nation in points per game. In January, she became the all-time leading scorer of Rider's women basketball, with 1,707 career points.

Then, near the end of the first quarter during a game on the road against the Quinnipiac Bobcats, Johnson squared up from the wing and drained a three-pointer. With that bucket, she earned the 2,000th point of her career.

After that game, in which Johnson scored 29 points while leading the Broncs to a win, Head Coach Lynn Milligan called the 2,000-point milestone an “amazing feat.”

“It goes to her efficiency, how hard she works and how she is involved in everything we do," Milligan said.

Despite the steady stream of accolades, Johnson has been tending the spotlight in her own way, which is to say reluctantly and with humility. Thrust into a leadership role in her sophomore season, Johnson is more apt to give credit to her teammates than shine the spotlight on her own accomplishments. “I’m motivated to be the best in the league,” she says. “It’s for my teammates, and their belief in me helps me.”

Johnson began playing basketball in fourth grade. In high school, she had aspirations of playing Division 1 basketball but drew little interest. “It was humbling,” Johnson recalls. “I had much growing to do before coming to college.”

But she stood out to Rider, and has grown in each season in points, rebounds and free-throw percentage. Knowing the ball is coming her way in high-pressure situations, she calls on the reassurance of her discipline. She says she wakes at 6 a.m. to watch film or practice on Rider’s Jason C. Thompson Court, putting up hundreds of shots before many students have opened their eyes to face the day. Having run through her practice routines so many times, she has confidence in her skills.

“I think it’s all about composure,” she says. “You have to be that calm leader.”

A sports media major with a minor in French, Johnson envisions a career in sports broadcasting, eventually. “When I’m done with basketball, I want to be around sports,” she says. “I love sports.”

But her future in basketball appears to be bright. Coaches and administrators say a shot at playing in the WNBA is well within Johnson’s grasp. For now, she’s not spending a lot of mental energy looking that far into the future. She isn’t wasting time reflecting on her status in the Rider record books or her record-breaking college career either.

“I think I’m going to wait for this chapter to end before I start reflecting on what it all means,” she says.