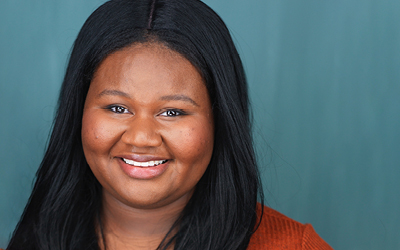 Terrie Goins '19 had one rule for her parents when she booked an ensemble role in the national tour of The Book of Mormon — don't come to the first show. Full of nerves and energy, she wanted to perfect her role before her biggest fans came to see her make her touring debut.

Her father, promptly, ignored this rule.

"My dad was so excited that he came to the show anyway," Goins says, laughing. "I'm glad he didn't tell me ahead of time. He came the first full week, then he came to the shows in Mexico. My mom's a teacher so she's coming to see the show soon, and I can't wait."

Her family is proud and rightly so. Goins was only two months out of college when she found out she would be joining the cast of the Tony Award-winning musical on a nearly 20-city tour.

"I had originally auditioned for the part before I came to Rider, but didn't get it so I was so excited when I found out I got it this time," she says. "It's such a rewarding goal to be fresh out of college and have my parents see me in a Broadway tour."

The Book of Mormon tells the story of two Mormon missionaries sent to convert the citizens of a rural village in Uganda to The Church of Jesus Christ of Latter-day Saints. Developed by the creators of South Park, the show includes the crude humor you'd expect with heartfelt sentiment you may not.

"These missionaries come in and try to change the villagers' beliefs and the way our lives are lived, but we end up changing their lives," Goins says.

Goins comes from a deeply musical family. "I've been musically inclined since I was in my mom's belly," she says.

Her father is a musician specializing in gospel music and her mother sang in church on Sundays. Some of her fondest childhood memories are listening to her father play the organ and her mother practice for mass. Goins too got her performing start at church, but discovered her passion for musical theatre after being cast in her high school's production of Hairspray. Since then, she hasn't looked back.

"Most teenagers ask their parents for money to go to the mall, but I was asking to attend a master class or to see a Broadway show," she says. "My parents made a lot of sacrifices and always found a way to get me there. They never deterred me from my dreams and my desire to make this my career."