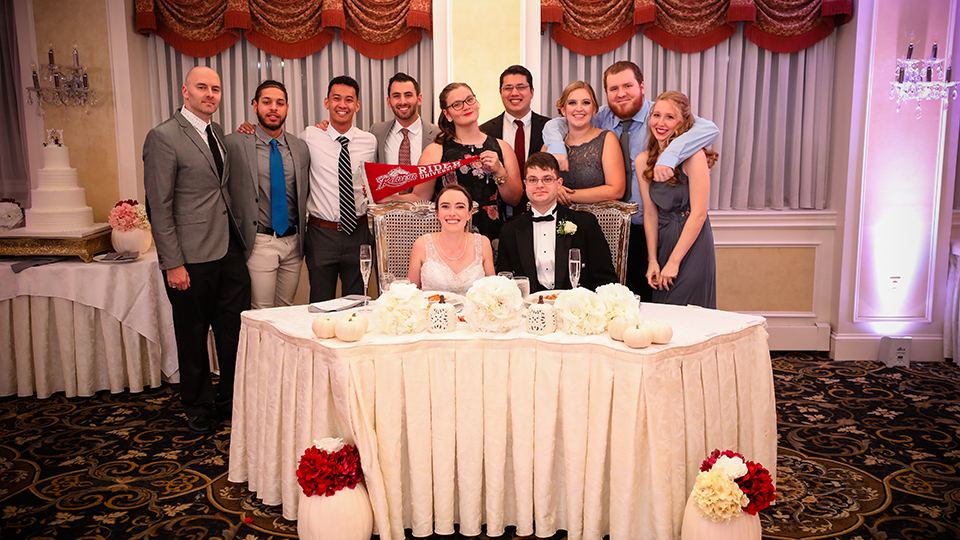 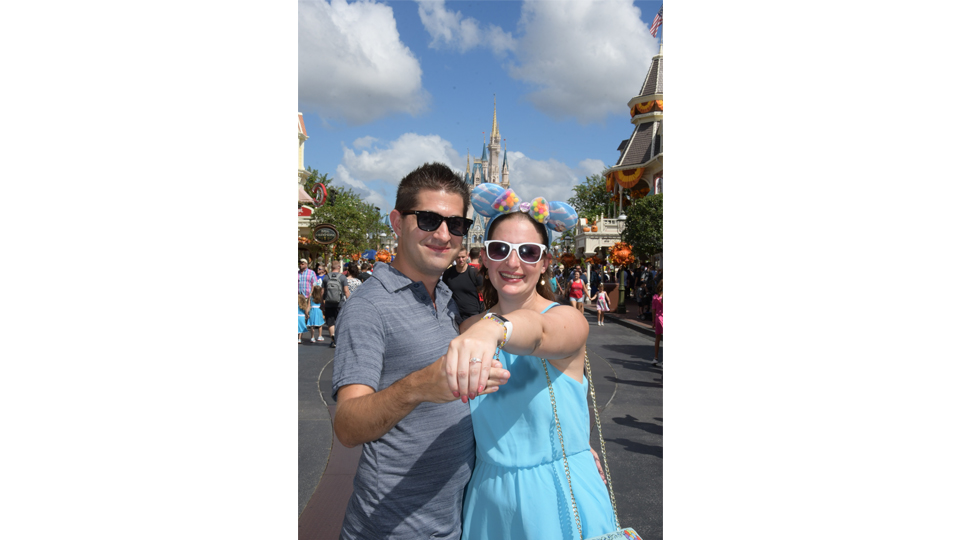 Alexa Caplinger '16 and Steven Wyrwas '10 were engaged on Oct. 2, 2019, at Magic Kingdom in Walt Disney World in Florida. Caplinger, who is employed in the Norm Brodsky College of Business, is currently pursuing a Master of Business Administration from Rider. 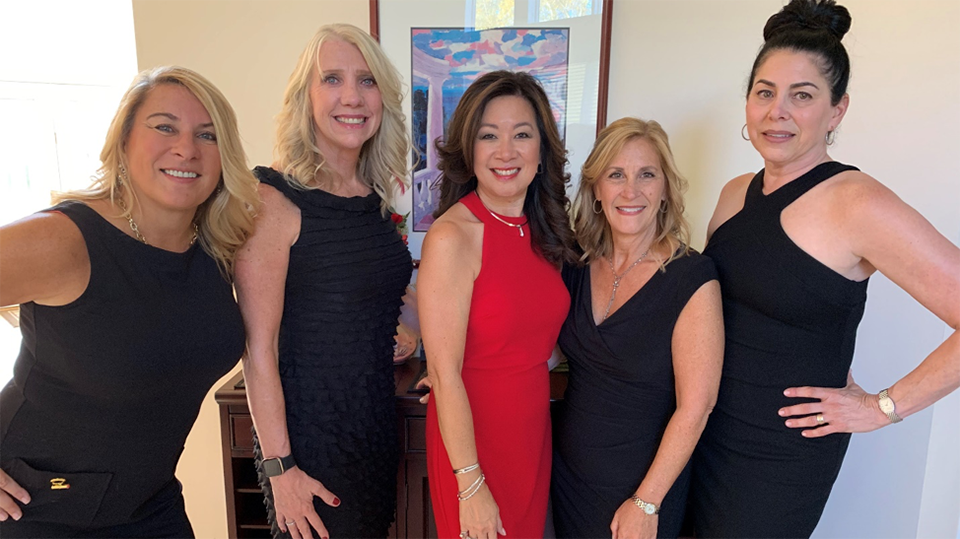 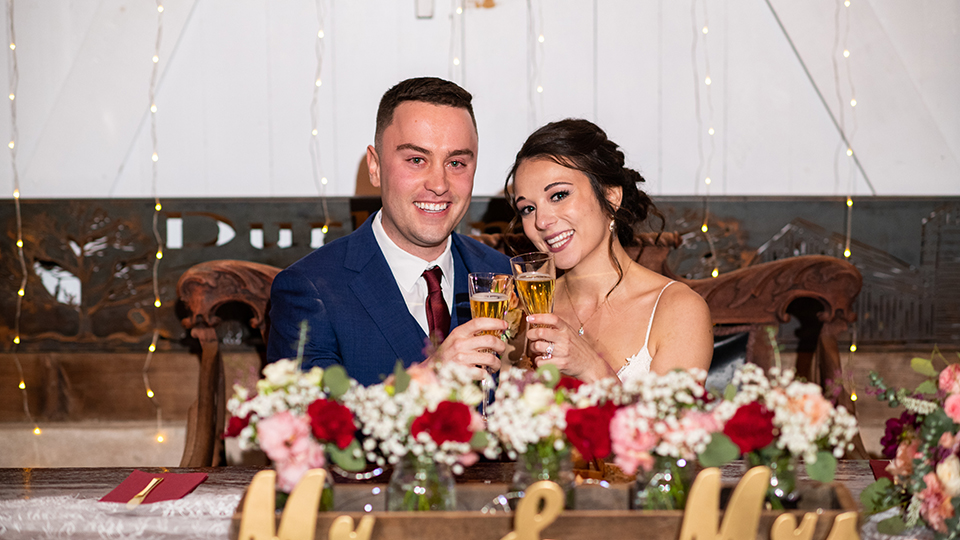 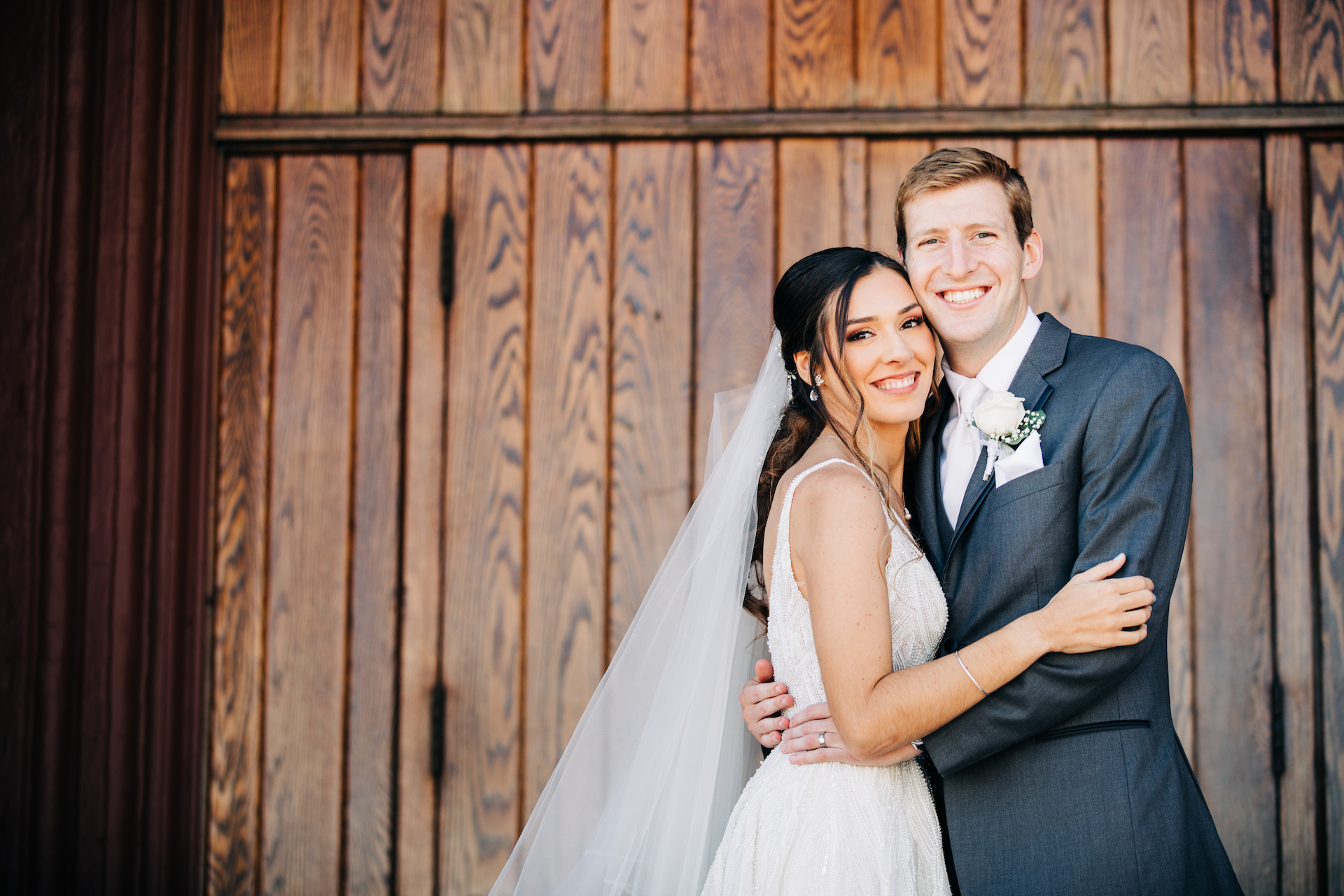 Matt ’14, ’15 and Dani Sampson were married on Oct. 12, 2019, in Long Branch, N.J. They currently live in Keyport, N.J., with their Australian shepherd puppy, Charlie. Matt graduated from Rider with a bachelor's in business administration and a master's in accounting. 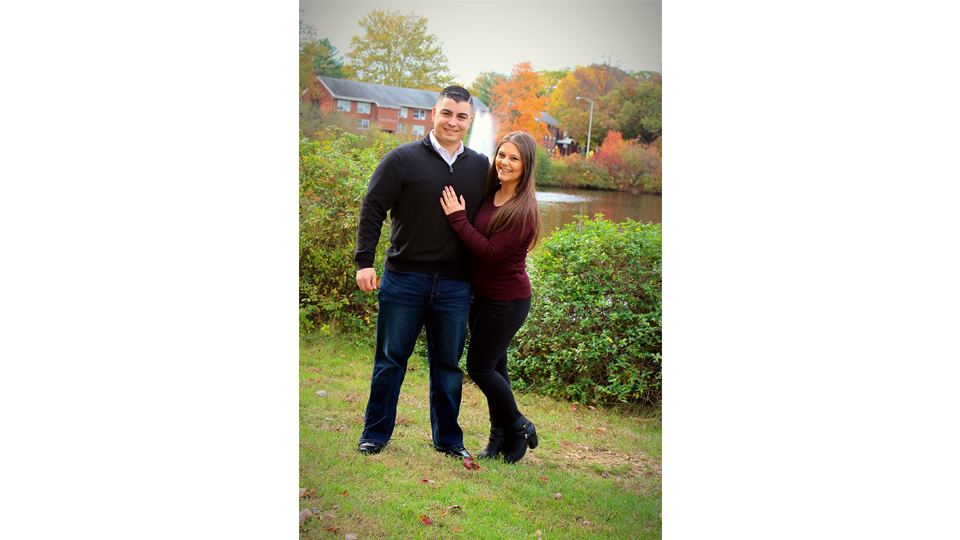 Jessica Spinosa ’17 and Nicholas Maglione ’16, who met at Rider in 2015, became engaged to be married last October. Taking Jessica back to the place where they met, Nick proposed on Rider’s campus. They plan to marry in October 2021. 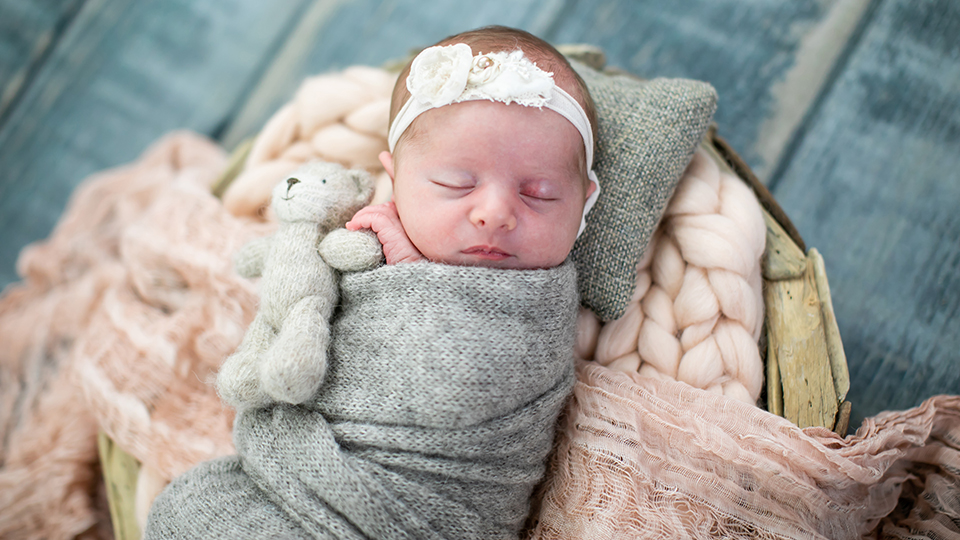 Alexandra (Alazio) Bilodeau '04 and her husband, Robert, of Bloomfield, N.J., announce the birth of their first child, a daughter named Aviana Della, on Oct. 30, 2019. 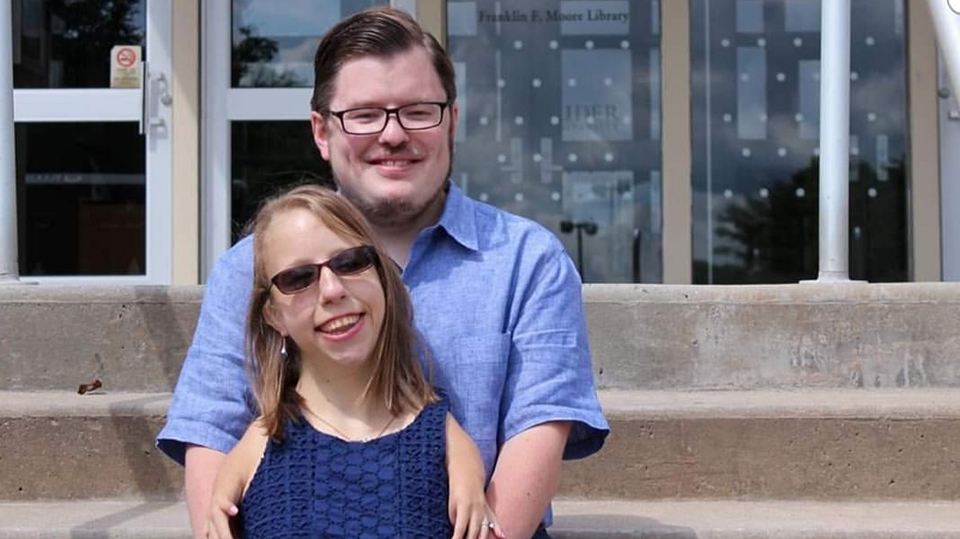 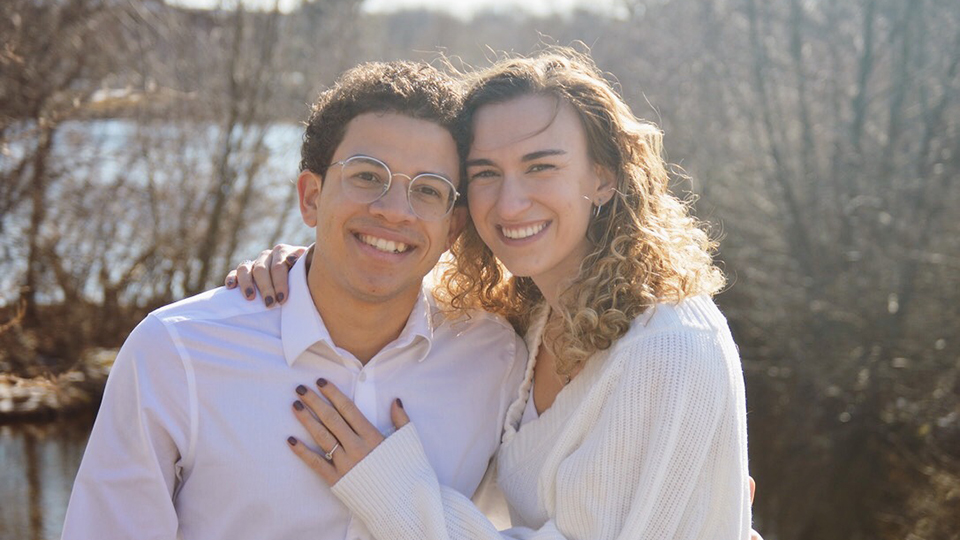 Johnathan Jackson '17 and Tori Brewer '18, '19 became engaged last June. The pair first met on the track team (they ran the same event, the 800 meters). They began dating in December of Brewer's first year at Rider. 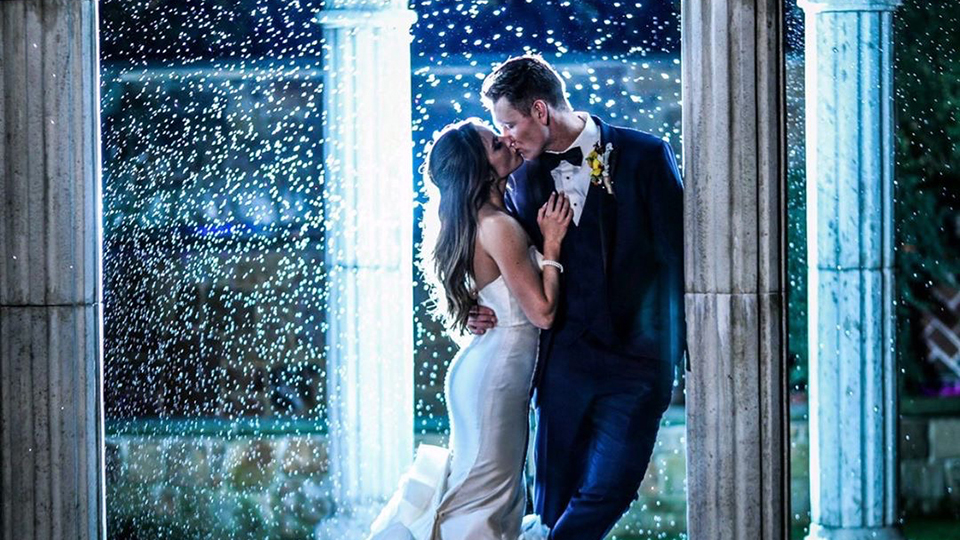 Nick Margevicius '17 and Shannon Kelly '17 were married on October 25, 2019. The couple met freshman year and Nick proposed on their last day of school their senior year. They both visit Rider each year to support the athletic programs and reflect on all the great memories they made in Lawrenceville. 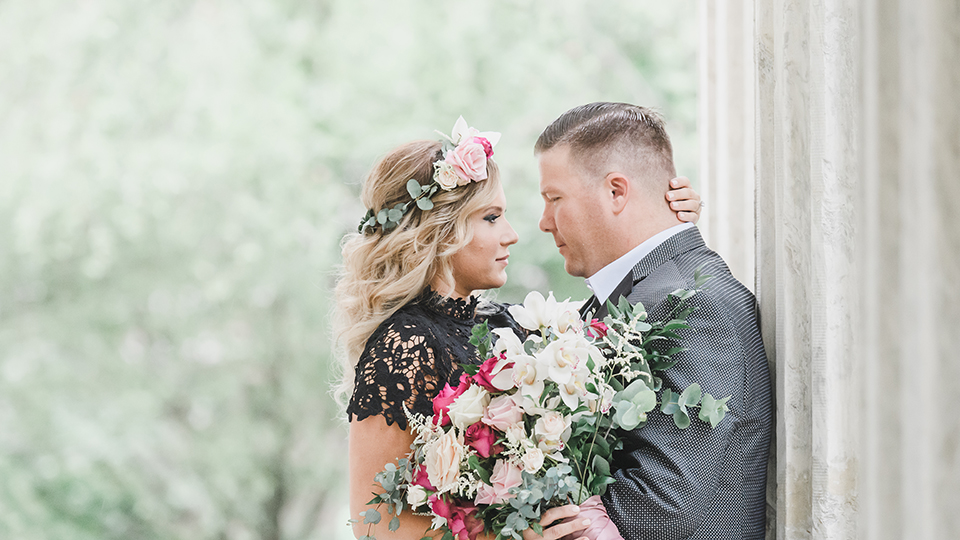 Carly Pustay '12 and William Seitz were engaged on Dec. 24, 2018. They are planning a Sept. 4 wedding at the Ashford Estate in Allentown, N.J., with close family and friends. Seitz is a police officer in Hamilton, N.J., and Pustay is a child advocate with Womanspace.

Howard Albrecht ’48 and Bernice Freedland Albrecht ’47 are celebrating the 75th anniversary of their meeting in Rider's halls, when the institution was located in Trenton. They recall sharing a hot fudge sundae at the Sweet Shop or at Moe's and enjoying a Sunday walk in Stacy Park. Howard and Bernice have been happily married for 72 years.

Dominick Karp ’64 sends his best wishes "to all who knew me at Rider and also to all the others at Rider — past and present." Karp received a bachelor's in management from Rider. After graduation, he was drafted into the Army for two years, which included a tour of duty in Vietnam in the 25th Infantry Division. After being discharged, he held a management position with the W.T. Grant retail company until 1973. At that time he began a career as an Internal Revenue agent with the Internal Revenue Service auditing corporations. He says, "I was glad I had my Rider education because it prepared me well for my IRS employment. I have fond memories of my days on the Rider campus and of my multitude of experiences performing IRS examinations. I retired from the IRS in January 2005. I am healthy, happy and live in New Hope, Pa."

Michael J. Bozek ’79 was named to the 14-member board of trustees of Samaritan Healthcare & Hospice. He is a controller at Railroad Construction Company of South Jersey. He received a bachelor’s from Rider, as well as a master's from Drexel University.

Clifford Parrish ’82 was named the new music director and organist for Trinity Parish Church in St. Augustine, Fla. Parrish received a bachelor’s in music education from Jacksonville University and a Master of Music in Conducting from Westminster Choir College. He resides in St. Augustine.

Gina Ackerman ’85 was appointed administrative director of surgical services at Cape Regional Health System in New Jersey. She has served as a healthcare executive in the tri-county region for over 25 years. Ackerman received a bachelor’s from Rider and a master’s from Rutgers University. She is also a certified Six Sigma Green Belt in health care from Villanova University.

Steven Wallitt ’85 was appointed to SCWorx’s board of directors last October. He has worked as owner and director of a packaging materials company since 1981. SCWorx helps empower health care providers to significantly lower costs and increase overall efficiency. Wallitt received a Bachelor of Arts in Communications from Rider.

Patricia Rohmer Evans ’86 retired last June after a long career in education. She has taught at the Eden Institute for Children with Autism in Princeton, N.J.; the Pemberton school district; and, for the past 23 years, in Abbotsford, Vancouver, British Columbia, Canada. She writes, "Rider provided me with the foundation and passion needed to excel in a teaching career that I have adored. My policy was to teach 'the whole family.' Inclusion was my specialty and strength. Every year for 33 years, I insisted I have the special needs and behavior students in grade one each year. Thank you, Rider, for inspiring me and laying the groundwork for such an amazing career. I know in my heart, I have touched many lives over the years."

Michael F. Housel ’87 has written his second book, The Persona, published by Airship 27. His first book, Flask of Eyes, was published by Caliburn Press. The Persona stems from his love of such pulp characters as The Shadow and the Green Hornet. Housel has been employed by the New Jersey Department of Education as a credentials examiner for 20 years. He currently resides in Trenton, N.J., with his wife, Donna, and their cat, Cody.

Kristina Eastmond ’89 was promoted to director of client service of Allegiant Private Advisors, an independent Sarasota, Fla., firm that offers fiduciary-level financial planning and investment advisory services. She received a bachelor’s in business management from Rider.

Daria Carlin Long ’90, was promoted to vice president and general manager of Gelest’s personal care group. Reporting to Gelest chief executive officer, Long, who is a member of the Society of Cosmetic Chemists and Cosmetic Executive Women, leads all aspects of the company’s personal care business, including marketing, sales, and product and distribution-channel management. She received a master's in business administration in international marketing from Rider and a bachelor’s in biochemical engineering from the University of Pennsylvania.

Ian Gordon ’91, who received a master's in business administration from Rider, was named in January president of operations of Elara Caring, one of the nation’s leading providers of home health care services. Gordon received a bachelor's from Montclair State University and an additional master's from the University of Virginia.

Christopher Hunninghake ’95, a science teacher, supervisor and administrator, retired in July 2018 after 30 years of working in New Jersey private and public schools. He is currently an education consultant providing workshops and coaching to New Jersey school districts implementing the Next Generation Science Standards. Hunninghake received a bachelor's in biology from the University of Virginia and a master's in education administration from Rider.

Jeanette Iversen Rattle ’96 was promoted to director of marketing communications for JEVS Human Services, one of Greater Philadelphia's largest human services organizations. She has been with the nonprofit for 19 years, helping to promote and grow its educational and career services programming for individuals facing economic and personal barriers. Rattle received a bachelor's in journalism/advertising from Rider and a master's in public relations from Rowan University.

T. Missy Balmir ’98 was named the interim new business administrator and public works director of Hamilton Township in New Jersey. She has worked for various elected officials at the federal, state and local levels of government during the last two decades. Balmir received a bachelor's in political science from Rider and a master's in public affairs and politics from Rutgers University.

Derrick Perry ’98 was elected president of the Norristown Council in Pennsylvania in January. He received a bachelor's in communications from Rider and is a member of a nonprofit One Love and Tabernacle Deliverance Church. Perry is the father of two children, Joecy and Derrick Jr.

Timothy Daly ’02 was promoted to executive vice president of finance to oversee the operations, finance and IT of Ovid Therapeutics, a biopharmaceutical company committed to developing medicines that transform the lives of people with rare neurological diseases. Daly joined Ovid in September 2015. Daly received his Bachelor of Science in Accounting from Rider.

Melissa Hofmann ’03, ’04 was named a partner of DIGIT, a full-service company providing comprehensive digital accounting services, consulting and financial education. She was previously the director of digital accounting. Hofmann, who received a bachelor's in accounting and a master's in business administration from Rider, is a former board member and an active member and speaker with the New Jersey Regional Chapter of the Pennsylvania/Delaware Valley Chapter of Community Associations Institute (CAI) and a lifetime member of Beta Alpha Psi.

Doug Tomson ’03 was sworn in as the new mayor of Hillsborough Township in New Jersey in January. He received a bachelor’s in political science and global studies from Rider.

Sara Bonstein ’06 was appointed as chief financial officer for Insmed Inc., a biopharmaceutical company in the rare disease space. She is responsible for leading the company’s financials, including planning and analysis, investor relations, accounting, tax and treasury. She also serves as a member of the executive committee. She holds a Master of Business Administration from Rider and a Bachelor of Science in finance from The College of New Jersey.

Andrew Silver ’06 has recently entered the voice-over field. Since completing a vocalization execution training course called Voice Box, he has used his voice for multiple characters in a cartoon, a project for a graduate student requiring voices of different students and for promotional reads. Throughout his success, he has applied the skills instructed to him throughout his training and has applied the discussions from the communications courses he attended during his Rider years. Aside from continuing his voice-over pursuit, Silver is working with his brother.

Makeda Hampton ’09 sang in the Metropolitan Opera's production of Porgy and Bess this winter. A soprano from New Castle, Del., she is a current doctoral candidate at the University of Kentucky. She received a bachelor’s and a master’s in voice performance and pedagogy from Oakwood University and Rider's Westminster Choir College.

Nathan Rugge ’09 was appointed as senior vice president, actuarial reserving, of Selective Insurance Company of America. The company announced the appointment in January. Rugge joined Selective in November 2009 as an actuarial assistant and most recently served as assistant vice president, actuarial pricing. He received a bachelor's from Rider and holds designations as a fellow of the Casualty Actuarial Society and member of the American Academy of Actuaries.

Daniela Compton ’10 was promoted to account manager within RT Specialty’s National Environmental and Construction Professional Liability Practice. She is responsible for supporting the new business, marketing, sales and coverage assessment activities of the company’s senior management. Prior to joining RT Specialty, Compton held numerous supervisory positions within the hospitality industry.

Miguel Edwards ’11 was appointed to the role of senior vice president – chief information officer of Pan-American Life Insurance Group, a leading provider of life, accident and health insurance throughout the Americas. Edwards received a bachelor's in business administration from the Metropolitan College of New York and a master's in business administration from Rider.

Lorelei Colbert ’14 was named the creative director for The Dove Agency, which specializes in servicing interior designers and homebuilders with project operations and marketing solutions. She holds a bachelor's in public relations and a certificate in leadership from Rider.

Kate Bradley ’17 was named the deputy chief of staff in Hamilton Township, N.J. She has previously worked as legislative director to Assemblyman Dan Benson.

Milika Griffiths ’17 was cast in a tour of Hamilton. The musical theatre alumna joined the musical's San Francisco tour as an ensemble member and swing for four of the show's leading female roles — Angelica Schuyler, Eliza Hamilton, Peggy Schuyler and Maria Reynolds. This is Griffiths' third national tour. She booked her first while she was still a student at Rider.

Olivia Barone ’19 was hired last November to be Montevallo’s sustainability coordinator in Montevallo, Ala. At Rider, Barone was the president of the Student Government Association and majored in environmental studies.

Matthew Marinelli ’19 was appointed assistant director of the Hunterdon Harmonizers, an all-male a cappella singing group based in Flemington, N.J. Marinelli, a baritone and instrumentalist, received a bachelor's in voice performance from Westminster Choir College.

Alyssa Maurin ’19 was recently accepted to the University of Connecticut's School of Dental Medicine and will start her post-graduate studies in the fall.