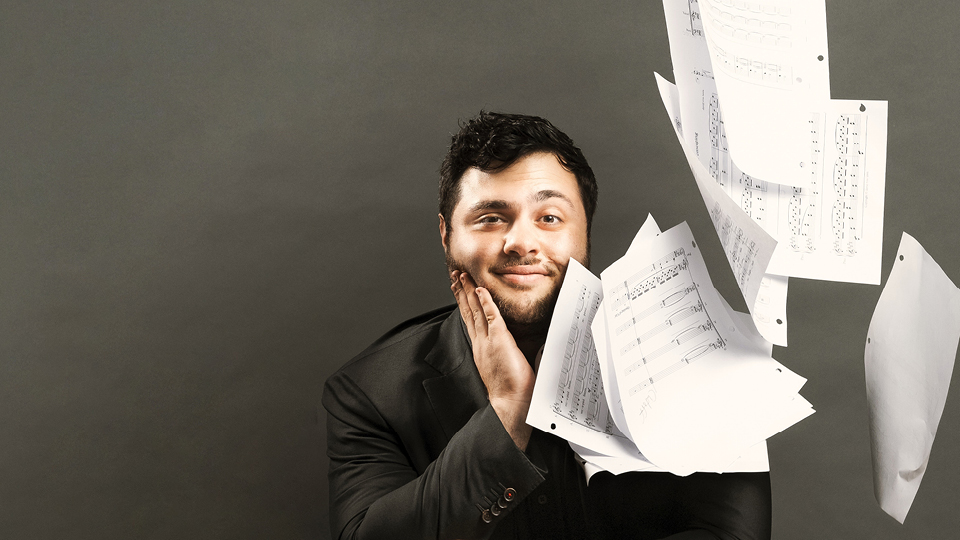 “Verdigris Wants to Blow Your Mind.”

That’s just one of many such headlines that Verdigris has garnered since Sam Brukhman ’15 formed the choral ensemble three years ago in Dallas, Texas.

Brukhman has made it his mission to take choral music to the masses, not only because it was choral music that turned his own life around, but because he wants others to feel the human connection that choral music uniquely inspires. To cultivate new audiences, Verdigris is using innovative programming while addressing novel topics such as immigration, the Dust Bowl and space exploration.

In its first season, the ensemble offered Becoming Alive: A Musical Narration of The Velveteen Rabbit, which combined choral music and synthesizer improvisation with live narration of the children’s classic. Consolation of Apollo fused choral music with images of the 1968 Apollo 8 space mission and was presented in planetariums.

In February, Verdigris presented Dust Bowl, a documentary with bluegrass music, video and choreography about the man-made environmental disaster that consumed nearly a decade beginning in 1931. The text is derived from newspaper articles, diaries and first-hand oral accounts of survivors. The music is composed by fellow Westminster Choir College alumnus and William Jewell College faculty member Anthony Maglione '01.

As dark-haired, bushy-browed Brukhman gestures to his chorus during performances with expressive arms, he seems a born maestro. But it was only after his experience at Westminster Choir College that his artistic vision and entrepreneurial spirit found a focus.

During a recent visit to New Jersey, Brukhman stopped in at his alma mater to catch up with one of his mentors, distinguished faculty member and conductor Dr. Joe Miller.

“I’ve known Dr. Miller since I was in eighth grade,” Brukhman says. Their discussion centered on how choral music is transforming, how the art form is becoming less formalized and more focused on reaching audiences. The terms “story-driven” and “multi-sensory experience” came up frequently.

“He is a dynamic young voice in our choral community,” Miller says.

The two met when Brukhman was singing in the Youth Chorale at Westminster Conservatory, the community music school of Rider’s Westminster Choir College.

“He has always had a vibrant spirit and a passion for music,” Miller continues. “I knew that Westminster Choir College would be a formative place for him to meet other people who shared his talent and love of choral music.”

It wasn’t long before Brukhman’s “drive and ability to form a vision” became apparent. When it came to pursuing his goals, Miller says Brukhman was fearless.

“Sam once came to me with the idea of starting a treble ensemble on campus," Miller says. "We already had so many choirs, but he had a vision for the type of music he wanted to study, the outreach and connections with composers that he was interested in cultivating, and the tenacity of learning by doing.”

“This is the type of entrepreneurial endeavor that is possible at Westminster,” Miller says. “With so many talented students and resources, students with Sam's drive are able to learn how to build a life as a professional musician. Sam responded to this environment by expressing his experiences through his unique lens."

Brukhman’s parents, Soviet Jews, and later his grandparents, emigrated from St. Petersburg in 1990. His parents arrived in the U.S. with a single suitcase between them. His father was just shy of completing a doctorate in physics, and his mother had studied engineering. In the U.S. they had to find different work.

“It was a huge sacrifice,” Brukhman says. “To find a better life they gave up their home, their physical things, photographs and their security.”

His grandmother, who lives in Brooklyn, not only taught Sam piano beginning at age 5 but accompanied him during his Westminster audition. Brukhman recently tweeted a photo of his grandmother looking through VR goggles to see the Glinka Choir Academy — one of the earliest choral academies in Russia — where she once taught.

How did the son of Jewish Soviet emigrants discover a passion for choral music? “I was never religious so choral music came as a secular discovery when I was a student at Wardlaw Hartridge School in Edison, N.J.,” Brukhman says.

He confides that he was a troubled child and didn’t do well in school. “My parents, being immigrants, encouraged me to be an overachiever,” Brukhman says, but their pressure had the opposite effect. It didn’t help that his brother achieved the standards set by his parents. (Brukhman’s brother now serves as a Verdigris board member.)

In ninth grade, Brukhman’s girlfriend encouraged him to join the choir. “I thought it was stupid," he says. "My teachers had given up on me, but the choir director pulled me aside and said, ‘You have a lot more to offer.’ He was the only teacher who believed in me, and then choral music pulled me in. When I sang, I felt connected to humanity.”

Even though his grandmother had told him he had great ears and great hands, he stopped taking piano lessons from her because he hated practicing. But at 14, he came around and pleaded with his grandmother to take him back on as a student. Soon he was playing Schumann’s “Aufschwung” and Bach’s Four-Part Preludes and Fugues. He won competitions and by 16 found himself on stage at Carnegie Hall, which his grandmother considered a miracle for someone who hadn’t spent his childhood quarantined in a practice room eight hours a day.

“It was an enormous climb in one year, but I knew I wanted to pursue choral music and I wanted to do it at Westminster,” Brukhman says. He dreamed of singing opera at the Met. “Westminster was the only school I applied to because I knew how good the professors were and because I wanted to study with Joe Miller.”

By mixing early music and Gregorian chant with folk and contemporary music, Miller changed the way Brukhman saw choral concerts. “He also worked with stage design and stage presence," Brukhman says. "The singers didn’t just stand on risers, they would interact with the audience.”

Professor and conductor James Jordan also had a major impact, as did Dr. Frank Abrahams, a professor of music education and Westminster's associate dean, with whom he’d studied conducting. “There were so many formative moments,” Brukhman says.

After graduating, Brukhman moved to Dallas to work as assistant choir director at Rowlett High School. From there he went on to teach at Brown Middle School. Meanwhile, he started talking to community leaders about what was missing in Dallas in terms of a choir. A lot of them rolled their eyes, he recalls, but he learned that new music created by Dallas composers was a void he could fill.

If it takes a village, Brukhman says the village started with anyone who would listen as he continued to cultivate relationships. Then he began hiring singers who were passionate about his vision. Patrons and donors followed, enabling him to create a season.

Brukhman also directs the choir at Temple Shalom and sings at the Church of the Incarnation. Since August, he has been artistic director of the Arts District Chorale. But this is the first year that he is able to devote himself full-time to Verdigris; thanks to its growth, he is able to earn an income from it.

With a 16-member ensemble, Verdigris has a board of directors composed of attorneys, business leaders, marketing professionals, religious leaders, scholars and educators. Verdigris offers transparency of its finances to aid in fundraising.

Brukhman credits Westminster for helping to develop his entrepreneurial, in addition to his musical, skills. He learned to connect with people of influence, a key ingredient in establishing Verdigris. Beginning with two house concerts, an online campaign was developed to kickstart fundraising and secure grants.

There continue to be challenges, for sure, from competition for donors to getting millennial audiences accustomed to watching from home to show up for concerts. But, so far, experiential concerts with relevant storytelling and unconventional settings have made that happen. “We get audiences to relate, feel and experience what they can’t elsewhere,” Brukhman says.

“I’m a firm believer that anyone can do what I do,” he continues. “The reason I’m good at talking to people is because, early on, I didn’t have anyone who believed in me. My search for connection manifested in that way. My grandmother reminds me how difficult I was to teach, and that I’ve chosen the hardest profession.”

The most difficult part, he adds, is creating a sound, staying humble and being attuned to the teachable moments.

“This is apparent in his work with Verdigris,” Miller says. “Sam continues to mature as a musician, to expand his dreams and to test his mettle galvanizing a community to support the vision of this ensemble. It requires the skills of a musician, a fundraiser and an artist. The seeds that Sam has always had inside him are beginning to produce outstanding results."