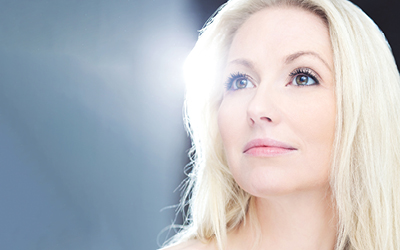 The score of Philip Glass’s opera Akhnaten features the composer's famously intricate, repetitive musical patterns. The first time soprano Dísella Lárusdóttir ’05 looked at the parts for a character named Queen Tye, she likes to joke that she needed a recording to prove a singer could actually perform them.

“The register was so high, and the way the music looked on the page, with the repetition — it’s not the typical way of singing for soprano,” she says.

Jokes aside, Lárusdóttir proved without a doubt that one could sing the part when she performed the role at the Metropolitan Opera last year. The New York Times called her performance “radiant.”

Lárusdóttir’s voice has been captivating audiences for years. Her career combines, in a sense, the passions of her parents. Her father was a trumpet player in the Iceland Symphony Orchestra for 30 years, and her mother is an actress. As a child, Lárusdóttir played the trumpet and piano, but she didn't intend to become a professional musician. She attended graduate school with an emphasis on psychology in her native Iceland. Following her father's death in 2000, Lárusdóttir finally decided to fully embrace music and seriously study voice.

In 2003, she participated in a master class taught by Laura Brooks Rice, a Westminster Choir College professor of voice, and decided to enroll in a graduate program at the College. She received a master’s in voice performance and pedagogy in 2005.

Although classically trained, Lárusdóttir has never quite relinquished a pop sensibility that she embraced early on in her life. As a budding opera star, she says she received warnings that associations with popular music would distort how serious critics perceived her.

"People would tell me not to sing pop anymore because no one would take me seriously, but during recitals, audiences would always ask for the popular stuff they saw me sing on YouTube,” says Lárusdóttir, whose latest album, dóttir, includes both arias as well as non-operatic songs. “I feel like you don't have to choose. You can be versatile."

Watching her exuberant performances, audiences may be surprised that Lárusdóttir describes herself as a shy person. “I do get nervous, but being on stage is a safe zone,” she says. “You’re with colleagues you trust, who you’ve rehearsed with for so long.”

While it’s not uncommon for Lárusdóttir to witness opera-goers attending the same performance multiple times, she is aware that some view opera as unapproachable.

“At the end of the day, it’s entertainment,” she says. “You get to hear beautiful music, where you often know a melody or two. I believe as soon as someone gives it a chance, they’ll love it.”