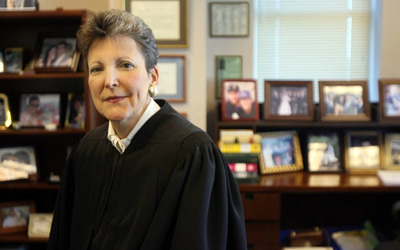 Hon. Linda R. Feinberg ’71 has practiced in almost every area of law and at every level of state government. Her career spans more than 40 years — half of which were spent as a Judge of the Superior Court of New Jersey (Mercer Vicinage).

To commemorate her remarkable career, Feinberg was recently awarded the highest honor from the New Jersey State Bar Foundation, the Medal of Honor Award. It recognizes those who have made exemplary contributions to improving the justice system.

“I was honored, surprised and really humbled by it,” Feinberg says. “As a lawyer and trial judge, I have worked to honor the dignity of the profession, to foster professional excellence, and to treat clients with patience and respect.”

Law was not Feinberg’s original plan. A sociology major at Rider, she thought about becoming a teacher or psychologist. Her career trajectory changed during her senior year when she visited a friend at Rutgers Law School. To pass the time as he studied, she decided to crack open a law textbook herself.

Upon graduation, she enrolled in the University of Akron Law School as one of only three female students that year.

Feinberg’s professional career began at Fort Monmouth, a U.S. Army base in Monmouth County, N.J., where she was a labor attorney. She then worked in various roles in Mercer County as an assistant prosecutor, assistant county counsel, municipal court judge and presiding judge of the municipal courts. She also joined the faculty of the law and justice department at The College of New Jersey in 1977 and started her own private practice.

The path for the next 20 years of her career was set in 1992 when Gov. James Florio appointed her as a judge of the New Jersey Superior Court.

“The best part about being a judge is that you are the only person in the courtroom who is neutral and has no allegiance to any side,” she says. “As a judge, I was always guided by my responsibility, as a neutral party, to review all the evidence and to make a fair and reasonable decision. Being a judge is the greatest honor that a lawyer can have.”

Retirement in 2012 was a short-lived period for Feinberg.

“Two weeks into retirement, I said to my husband, ‘I don’t have any issues to decide.’ Coincidentally, the following week I had breakfast with the managing partner at the Szaferman Lakind firm.” Feinberg recalls, “At the end of the meal, we shook hands, and I joined the firm two weeks later.”