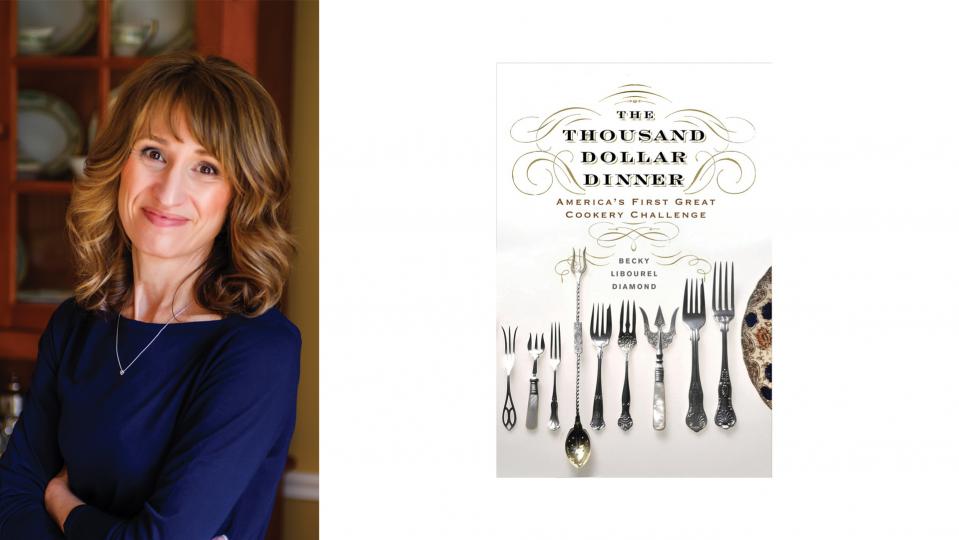 Studying journalism while at Rider, Becky Diamond ’90 had a true love for writing. She also had a serious interest in the culinary arts and found a way to combine her two passions into a successful career. She has just released her second book.

The Thousand Dollar Dinner tells the story of a 19th-century culinary challenge between Philadelphia restaurateur James Parkinson and the Delmonico family of New York. Diamond takes readers through the luxurious 17-course feast that helped launch fine restaurant dining in America as we know it today. Her book introduces the culinary norms of the 1850s and describes how America’s eating habits have changed and developed over time.

While studying at Rider, Diamond had many classes, professors, advisors and internships that nurtured her interest in journalism. A Writing for the Media class first inspired her, and Dr. Frederick Turner (emeriti faculty), Dr. Tom Simonet and Dr. Pamela Brown, professor and chair of communication and journalism, encouraged her along the way.

“My time in journalism classes has stayed with me throughout my career,” says Diamond. “The people I met and the opportunities I was offered really shaped my professional life in significant ways.”

Diamond’s first book, Mrs. Goodfellow: The Story of America’s First Cooking School, was published in 2012. This book tells the deep history of how one woman, Mrs. Goodfellow, began a delicious tradition and paved the way for future chefs of America. Both of Diamond’s books have been favorably reviewed, her most recent by The Wall Street Journal and Entertainment Weekly. The WSJ wrote, “Ms. Diamond [is] a prudent and careful chronicler of one of the most deliciously over-the-top dinners ever served in America.”

When not focusing on her book writing, Diamond occasionally does some freelance writing and editing. She enjoys hanging out with her husband and two children and enjoys hiking, cooking and swimming laps in Rider’s pool.

“I am thankful for my time at Rider, as well as for the experiences, influences and encouragement the university has provided,” Diamond says.

She is currently at work on the idea for her next book. She hopes to write about Frenchman Pierre Blot, often billed as America’s first celebrity chef.