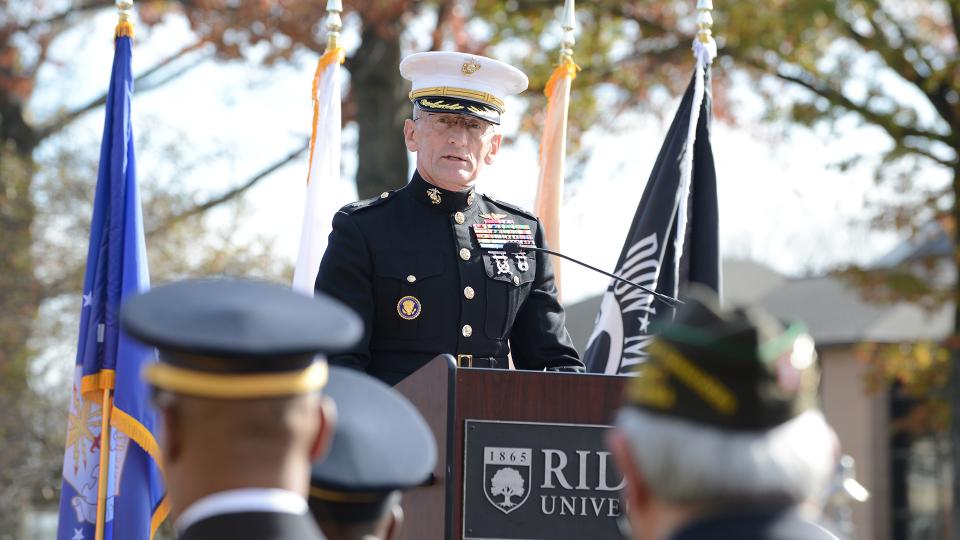 Normally crisp, sharp and punctual in attitude and action, Lt. Col. Joseph Shusko ’78 of the U.S. Marines dragged his feet when it came time to file the paperwork for his mandatory retirement. It took a commanding officer to finally tell him he could delay no longer. The prompting came with a caveat, though. Upon retiring from active duty, Shusko could take command of The Martial Arts Center of Excellence (MACE) at The Basic School, which teaches the fundamentals of being a Martial Artist to all Marines.  As the Director of the MACE, he assumed the responsibility of training all Marines, both active and reserves to the art of becoming what Shusko calls “ethical warriors.”

The posts have allowed him to feel like he has never left the military, and, if the man known as "Joe Marine" has it his way, that feeling will never end.

“For my entire career, I’ve thought that I don’t have a job because I love coming to work,” Shusko says. “It’s hard to believe I get paid to have so much fun.  I have had the chance to work with some of the greatest patriots in the world.”

His military career has allowed him to see the nation and the world. Shusko has visited every state in the U.S. and 71 countries. Exposure to so much of the globe helps him value — to an even greater extent — the country he calls home and has helped defend for five decades as a pilot in Peace Keeping operations in Beirut, Bosnia and Desert Shield/Desert Storm.

The military is in Shusko’s blood. His father was a career soldier. All six of his brothers were Marines. He considers the Marines his calling, and since he was a child, he looked forward to joining an organization that was bigger than himself. Shusko perceived the Marines to be the toughest of all the branches of the armed services, and that was one of the main draws of joining the organization. Comparing the Marines to the small, elite organizations within the U.S. Army, Shusko says, “We’re like that as a whole. Our camaraderie, legacy and history make us a tighter organization.”

Like many in military families, Shusko was often uprooted while he was growing up. He lived abroad in Turkey, Iran, Germany and other foreign places before he was 10. His family eventually settled near the Jersey Shore.

A wrestler at Long Branch High School, Shusko looked to nearby Rider College and its stellar wrestling team and business program when it came time to apply to college. He majored in marketing and minored in art, though his main interest remained entering the military and serving his country. Still, the skills he learned at Rider have served him well throughout his career.

“My education has played a role in my life, and even though I’m not a businessman, I’ve used those skills often,” he says. “In the military, you have to market yourself. As a director, you also have to sell programs to Marines. ”

His entrance into the Marines came while he was still an undergraduate and, in 1975, he took his first steps toward becoming a pilot after being prompted to take an aviation test. His skills as a helicopter pilot were so pronounced that after his second deployment (to Beirut in 1982/3), he was selected for duty as a White House Liaison Office, Marine Helicopter Squadron One (HMX-1), flying Marine One under the Reagan administration. “I was tickled pink and so honored that they picked me,” he says.

For the next five years, Shusko flew first for President Ronald Reagan and then Vice President George Herbert Walker Bush. He’s never been able to publicly recount specific stories about his time as a presidential pilot because of non-disclosure agreements, but he calls Reagan a true gentleman who was grandfatherly and — like President Bush — extremely patriotic.

“It was five of the best years of my life,” says Shusko, whose highly decorated career includes authorization to wear the Presidential Service Badge along with numerous personal awards.

Values and good character are essential to Shusko. He says his family and faith provide a bedrock on which to build his — and the Marines' — core values of honor, courage and commitment. “I have those values tattooed on my soul,” he says.

In 2012, he self-published a book, Tie-Ins For Life: Stories That Teach Great Values and Inspire Moral Action, that contains stories designed to build character and inspire moral action. Shusko picked up storytelling’s power as a teaching technique as a youngster, though he didn’t realize it until much later.

“When I was a young pup on the Jersey Shore, one of my coaches always made us run to the pier and back,” he says. “At the end, he would tell us a story. It didn’t dawn on me until later that here was a mentor who was telling me stories to develop and build character.”

The lessons of these stories, Shusko discovered, are especially effective when listeners are physically exhausted or have experienced some kind of adversity together. Listeners are simply less receptive when these conditions are not met, but when they are, "You don’t ever forget it,” Shusko says.

Shusko notes that in their physical conditioning, Marines resemble professional athletes, but in their education, they’re also like university students. The Martial Arts Program that he oversees exposes troops to ancient cultures and the ways of warriors throughout history, giving today's Marines a broad perspective on their duties. “You can build a 3,000-year old brain just by studying,” says Shusko, who always ties the lessons back to the organization’s core values of honor, courage and commitment.

Looking forward to entering his fourth decade serving the United States Marine Corps, Shusko has kept his focus clear and unambiguous: “I want to make a difference in people’s lives and make them better than me so that they can take care of our great country.”