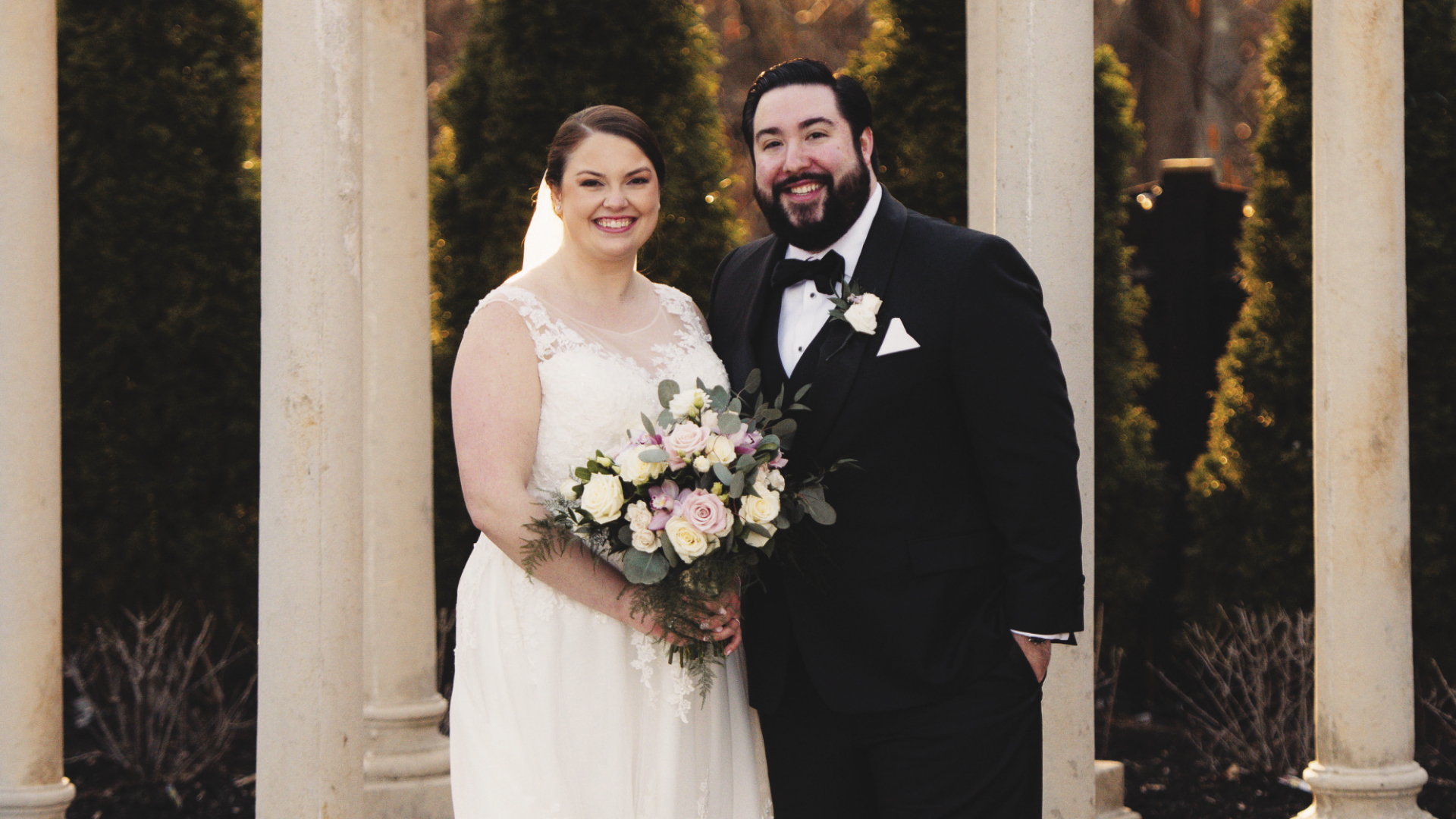 Michaela Hady ’16 and Nicholas Caminiti were married on March 20. At Rider, Hady studied secondary education and English. Two of her bridesmaids were fellow Rider alumnae, Madison Keefrider ’15 and Allyson Galano ’16. 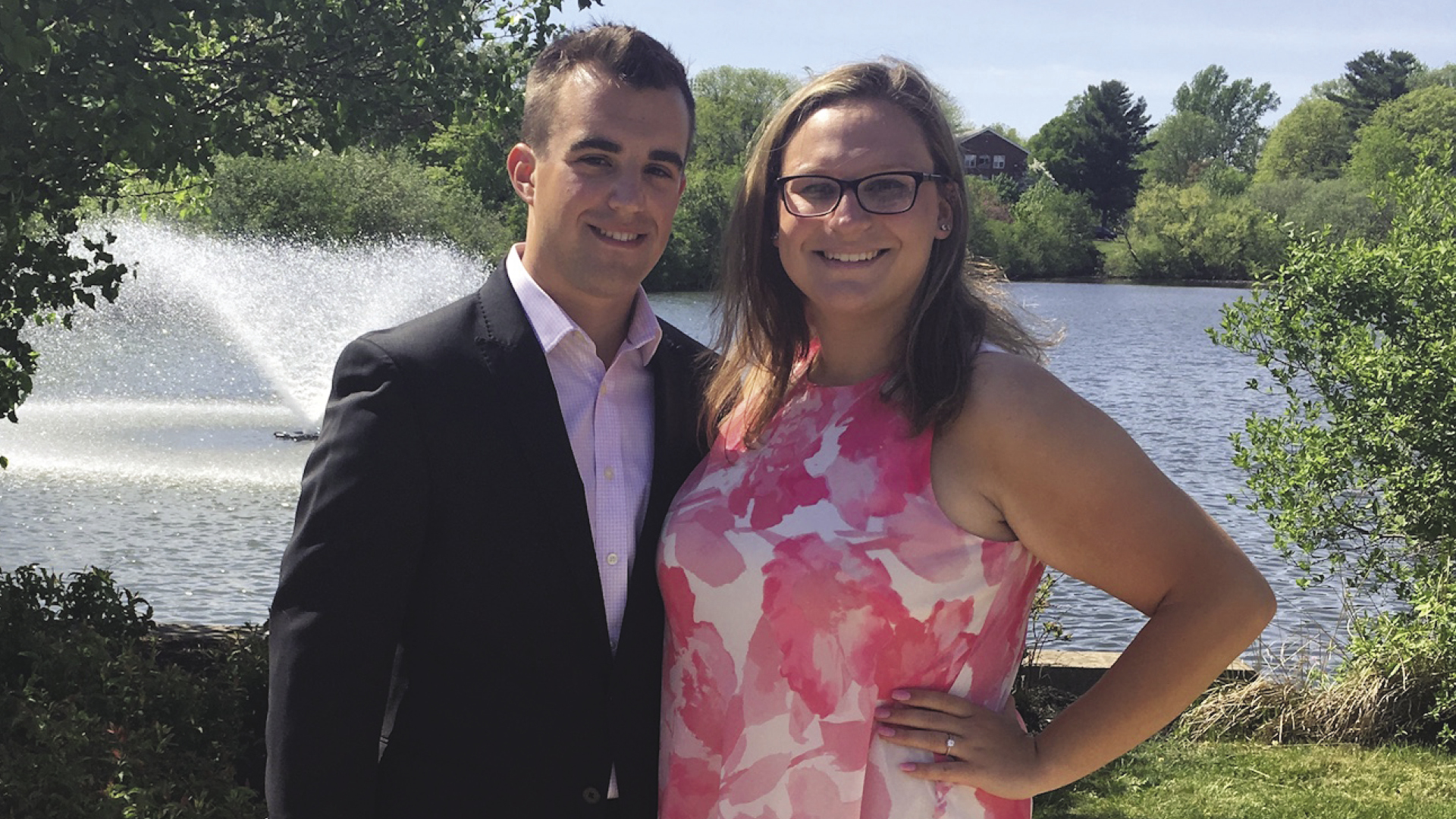 Samantha Ottavi ’18 and Caleb Miller ’18 are engaged with plans to marry in 2024. The couple met as biochemistry majors at Rider and started their relationship in 2016. 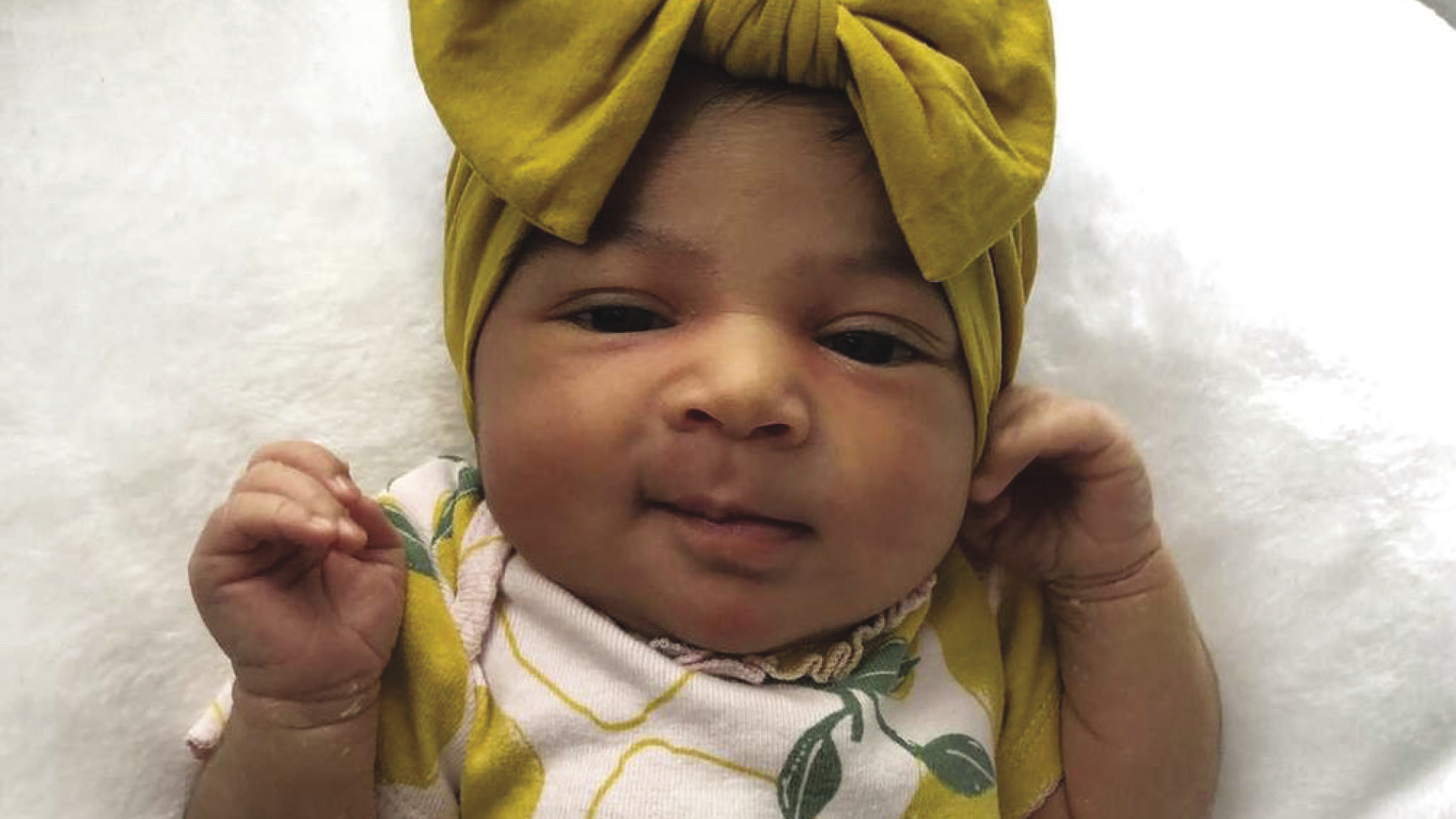 Julia Muziani ’19 welcomed daughter Natalia Marie Desinor on July 22. She weighed 7 pounds, 3 ounces and was 20 inches long. Muziani says she loves being a mom to her sweet girl. 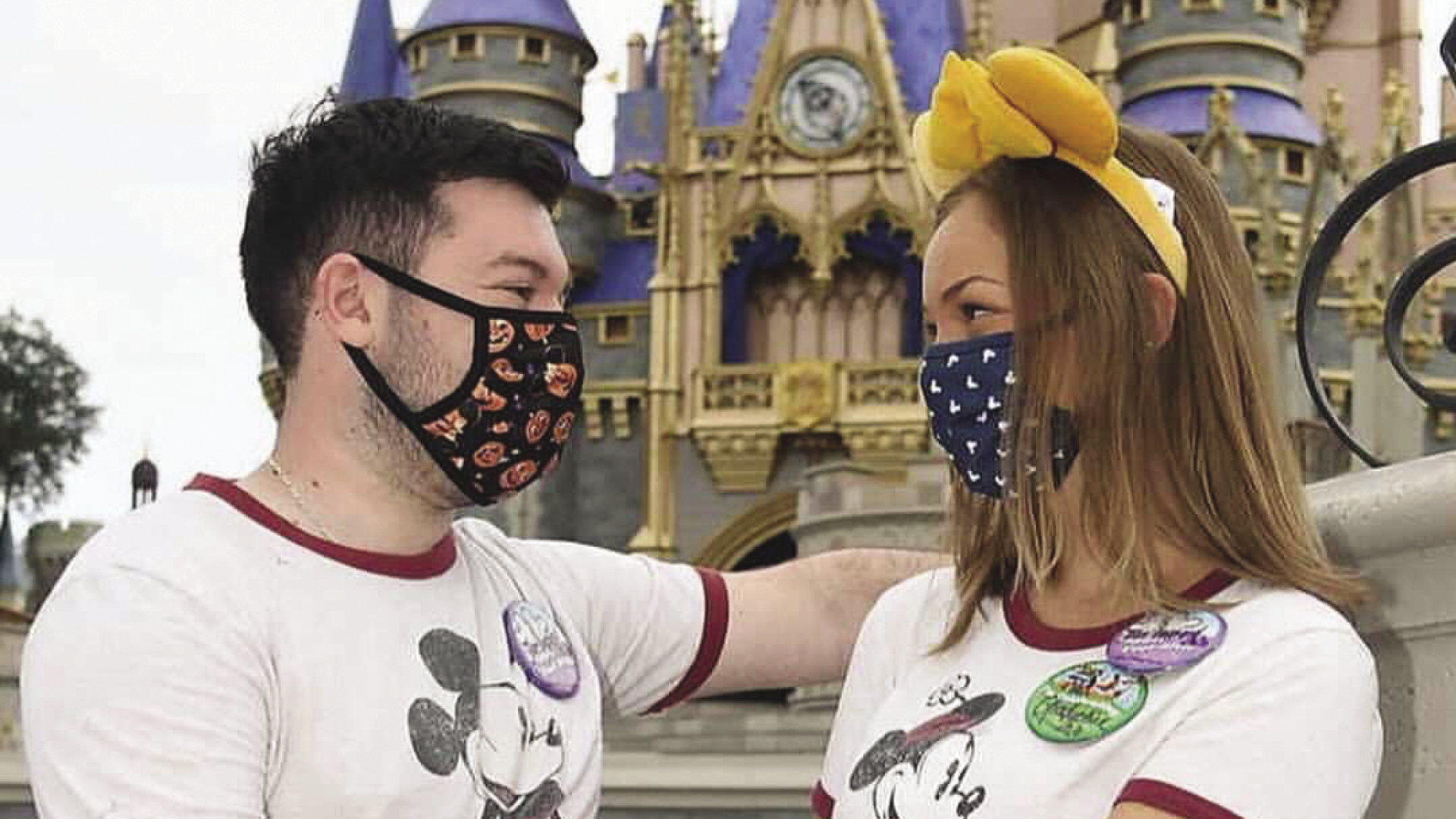 Maggie Brennan ’20 and Joey Murdaco are engaged. During a trip to Disney World to celebrate Brennan’s graduation, Murdaco proposed in front of Cinderella’s Castle. Disney has held a special place in the couple’s hearts. Nearly every weekend Murdaco visited Brennan on campus, they would watch a Disney movie. They are excited to continue making magical memories with a wedding planned for March 19, 2023. 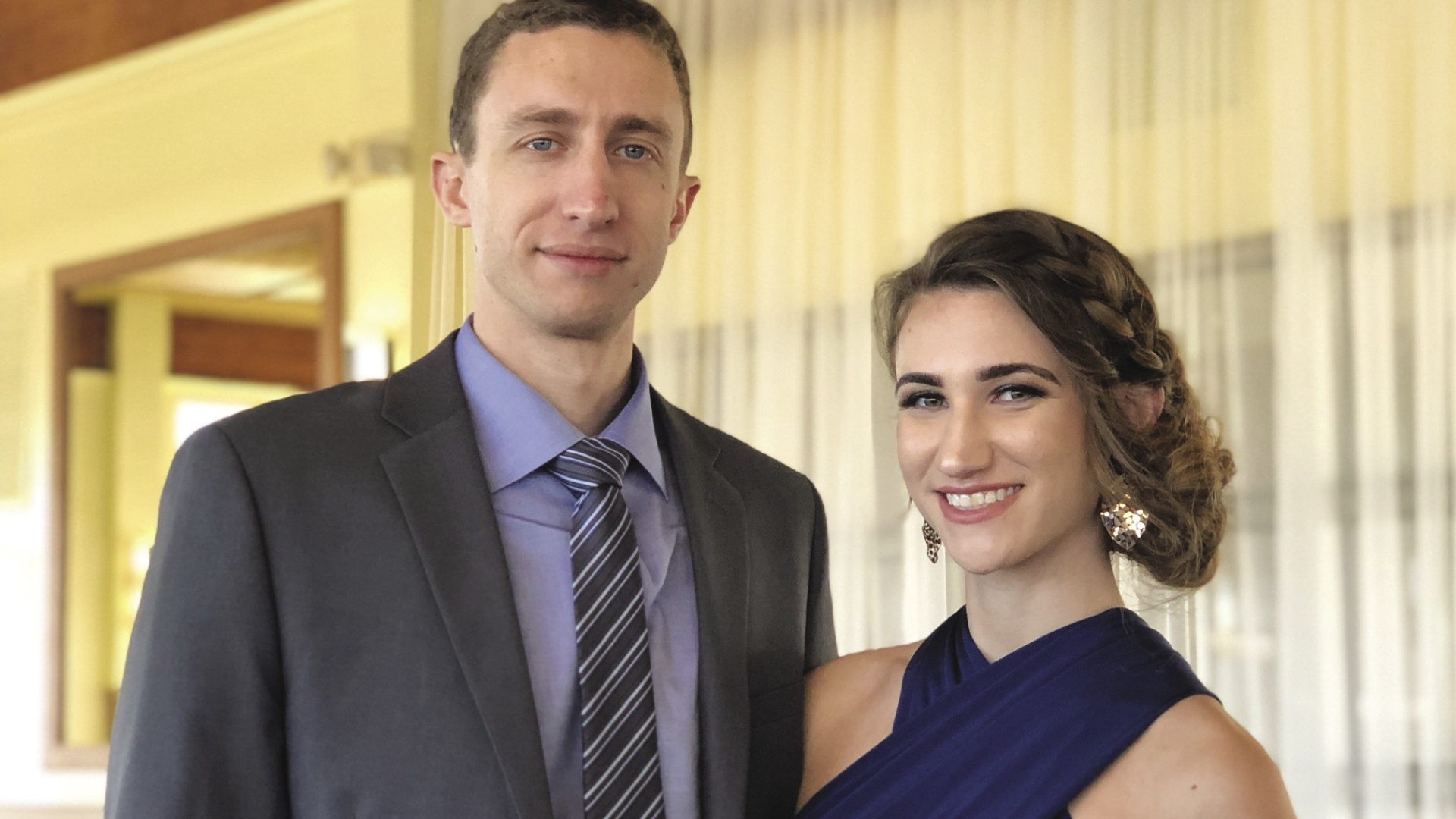 Jennifer Patchett ’20 and Bryce Harrigan are engaged. The couple met at Brookdale Community College and have been dating for seven years. They love to travel, cook and hang out with their dog. Harrigan proposed at Allaire State Park on June 13. Patchett studied public relations at Rider. 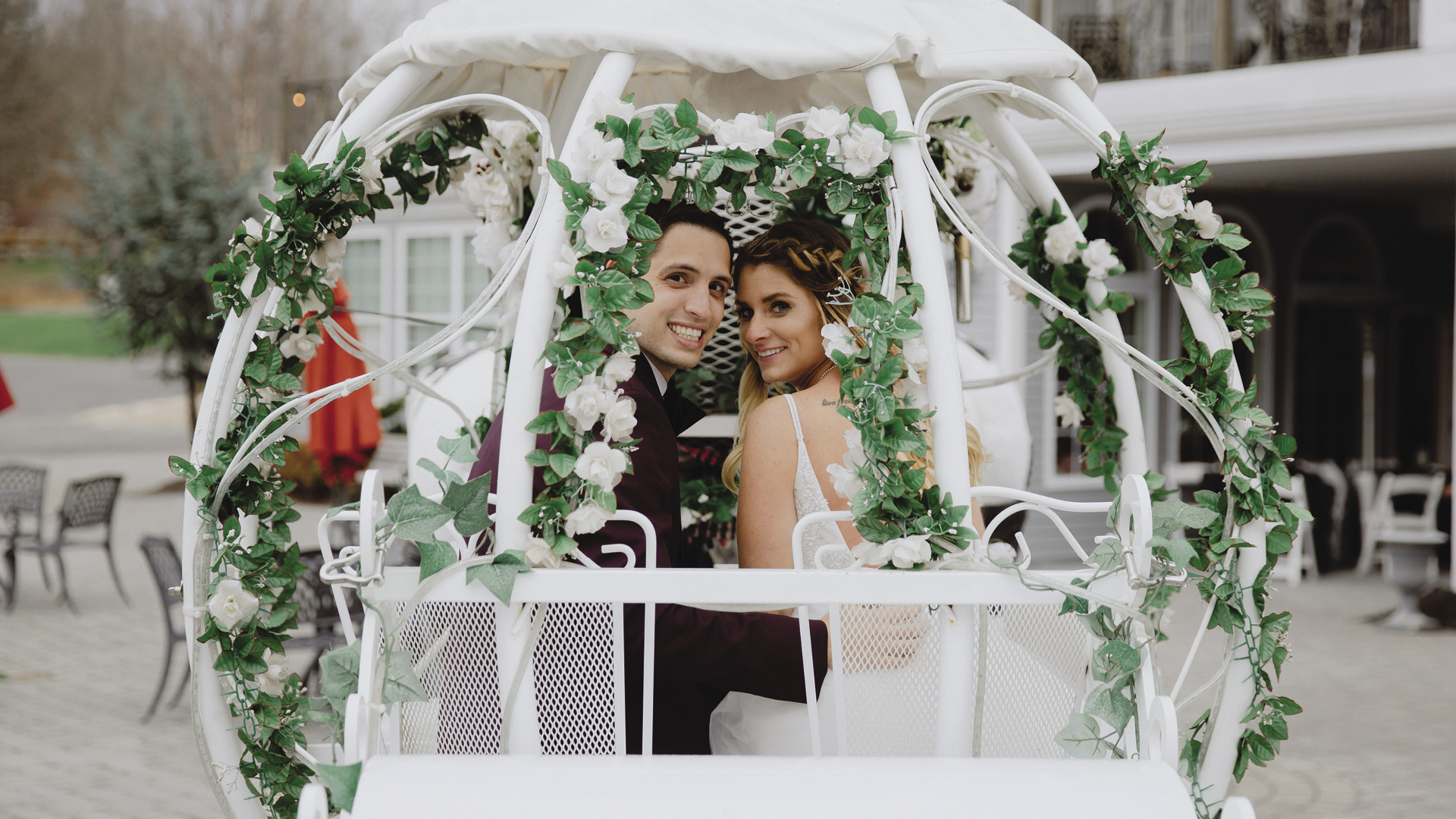 Nick Micciulli ’15 and Brittany Gilstein ’14 were married on Nov. 15, 2020, at Falkirk Estate & Country Club in Central Valley, N.Y. A number of Rider alumni were members of the bridal party, including Michelle Caravaglio ’15, Rhea Phipps ’14, Jared Theaman ’15 and Derek Rosengarth ’15. The couple met at the Student Government Association booth during an event in 2012 and began dating the following year. They were engaged on Dec. 12, 2018. In 2021, they relocated from Westchester, N.Y., to Cork, Ireland, to work abroad and travel the world. 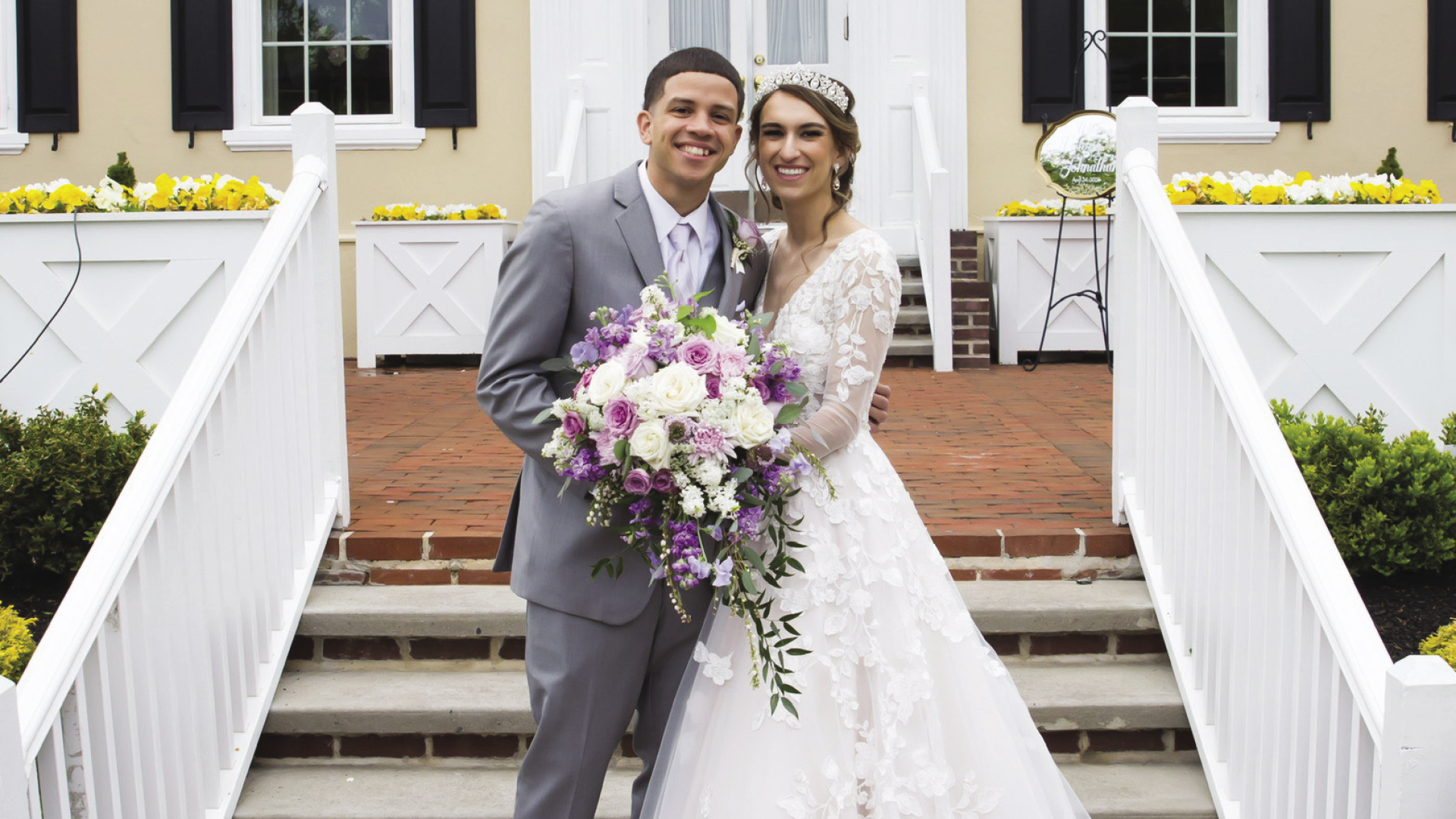 Johnathan Jackson ’17 and Victoria (née Brewer) Jackson ’18, ’20 were married on April 24 in Bensalem, Pa., surrounded by a number of fellow Broncs. The couple met while running on the Rider track & field team and after 5 1/2 years of dating, they were engaged in June 2019. Johnathan studied human resource management and health care management as an undergraduate. Victoria studied public relations and earned her master’s in business communication.

Dr. Alan L. Moss ’65 published a new novel, The Choices: A Treasure Hunt Thriller (Cresting Wave Publishing), in October. He is the author of five published novels and two works of nonfiction. Before turning his attention to writing, Moss was a congressional fellow in the U.S. Senate and agency chief economist.

James F. Bass Jr. ’72 retired in December 2020 as a full-time judge for the Chatham County Superior Court of the Eastern Judicial Circuit of Georgia. After 25 years on the bench, he assumed senior judge status in January. He says, “Though being able to serve when needed but at my discretion has lightened my calendar, I regularly preside over the Savannah-Chatham County Drug Court, which I established in October 2001. It’s gratifying to continue with the program that was the first accountability option of its kind in the area and has been recognized on the state and national levels as a model diversion alternative. I’m also continuing to serve in Veterans Treatment Court and am active in various community leadership and service roles. As I’m settling into my new work pattern, my wife, Janice, who retired a couple of years ago, and I are enjoying time spent with our son, daughter-in-law and two grandchildren.”

John K. Smith ’77 was appointed to the board of directors of the St. Baldrick’s Foundation, the largest non-government funder of childhood cancer research grants. Smith is the president and CEO of Pennsylvania Lumbermen’s Mutual Insurance Company. He received a Bachelor of Science in Commerce from Rider and a Master in Business Administration from the University of Pittsburgh, in addition to many professional designations.

Mike Johnson ’90 was named a senior vice president and regional commercial executive of Riverview Bank in Susquehanna Township, Pa. He brings 34 years of banking experience to the job. Johnson received an associate degree from Bucks County Community College, a bachelor’s from Philadelphia University and a master’s in business administration from Rider.

Nicole Woodland ’98 was elevated from chief organizational effectiveness officer to president of Compas, Inc. She has been with Compas since 1998 and has held various positions throughout her career with the pharmaceutical media planning and buying firm. Woodland earned a bachelor’s in business administration from Rider.

Paola Canepa ’01 has been employed with Cadwalader, a law firm, for more than 11 years, most recently as an art director. At Rider, she received a Bachelor of Arts in Journalism.

Audrey Peterbark Ross ’01, ’03 was named Lake Ridge Elementary Teacher of the Year in Texas for the 2020-21 school year. A music teacher, she is currently working toward a doctorate in educational leadership from Liberty University in Virginia. Peterbark Ross received a bachelor’s and a master’s from Westminster Choir College.

Dr. Lynn Gary Atkins ’04 was named the new artistic director of the Philadelphia Handbell Ensemble. He is the director of choral activities of the Pinelands Regional School District in Tuckerton, N.J., and a member of the music staff for All Saints Church of Princeton, N.J. Atkins received a Bachelor of Music in Music Education from Westminster Choir College and is a member of the first cohort to obtain the dual Master of Music/Doctor of Musical Arts in Choral Conducting from James Madison University.

Warren E. Moore ’05 was appointed executive vice president, chief operating officer of Inspira Health in June. He received a bachelor’s in business management from the University of Maryland, College Park, and a master’s in health and human services administration from Rider. Moore received Rider’s Harold L. Conover Leadership Award in 2018.

Dr. Adam Angelozzi ’06 was
appointed superintendent of schools by the Point Pleasant School District Board of Education in New Jersey in June. His term began on July 1. Angelozzi previously served as principal of Manalapan High School in the Freehold Regional High School District. He received a Bachelor of Science in Physics (Secondary Education) from The College of New Jersey, a Master of Arts in Educational Administration from Rider and an Ed.D. in Educational Leadership from Rowan.

Ryan LaBoy ’10 is the new director of the Berkshire Children’s Chorus. In addition to his new appointment, LaBoy will also serve as a virtual music instructor (conducting and voice) this season at the Shanti Bhavan Children’s Project in Tamil Nadu, India, as part of a partnership with the New York-based organization Broadway for Arts Education. He received degrees in choral conducting and music education from the University of Minnesota and Westminster Choir College.

Dwight Sawin ’11 was named vice president of finance of Lexington’s Netgain Technologies. Prior to joining NetGain, Sawin was the chief financial officer at Beneco, a specialty provider of retirement plans, compliance services and employee benefits. He received a bachelor’s in accounting from Rider and a master’s in business administration from Grand Canyon University.

Shannon Murphy ’12 announced in June that she will begin a new position as the assistant director of music and organist at Trinity Presbyterian Church in Montgomery, Ala.

Joe Forte ’13 was voted president-elect of International Public Management Association for Human Resources NJ, a professional organization of public-sector human resources professionals who live and work in New Jersey. Forte is employed with the New Jersey Civil Service Commission in the Office of Diversity Programs.

Rebecca Hoppe ’14 was awarded the Dean Christine Conaway Graduate Fellowship from Alpha Lambda Delta. She was one of only 26 applicants nationwide to earn a graduate fellowship from the organization. She is currently a doctoral student in developmental psychology and research assistant at Virginia Commonwealth University. Hoppe earned a bachelor’s in psychology and Spanish from Rider.

Dr. Tiffani F. Methvien ’14 was recognized by Continental Who’s Who as a top optometrist. With several years in the field, Methvien treats common and complex eye conditions. She received a doctorate from the Pennsylvania College of Optometry, along with a certificate of excellence for inpatient care. She earned a bachelor’s in liberal studies from Rider and has worked as an ophthalmic assistant and technician for eight years and as an optometrist for two years.

Rebecca Smith ’15, ’16 has been promoted to account supervisor at R&J Strategic Communications, a full-service, integrated marketing and public relations agency. In her new role, Smith will take on a greater leadership position with her accounts as well as play a vital role in the continued growth of the agency’s health care and human services practice area. Smith graduated summa cum laude from Rider University, earning a Bachelor of Arts in Public Relations and a Master of Arts in Business Communication. She served as one of the founding members of Rider University’s Public Relations Student Society of America and was also recognized by the New Jersey Advertising Club as one of New Jersey’s Best Marketing and Communications Professionals under 40 in 2020.

Alexis Bailey ’19 joined the New Jersey Business & Industry Association (NJBIA) as director of government affairs. Bailey, a former NJBIA intern, will complement NJBIA’s government affairs team conducting research and legislative policy analysis, with a strong focus on employment and labor issues. She worked as a legislative research associate with the Kaufman Zita Group before returning to NJBIA. Bailey graduated with a bachelor’s in political science from Rider.

Michael DeLorenzo ’20, a first-grade teacher at Hopewell Elementary School in Mercer County, N.J., published his first book for children, The Super Guide to Becoming a Superhero (Atmosphere Press). At Rider, DeLorenzo was a double major in elementary education and integrated sciences and math.