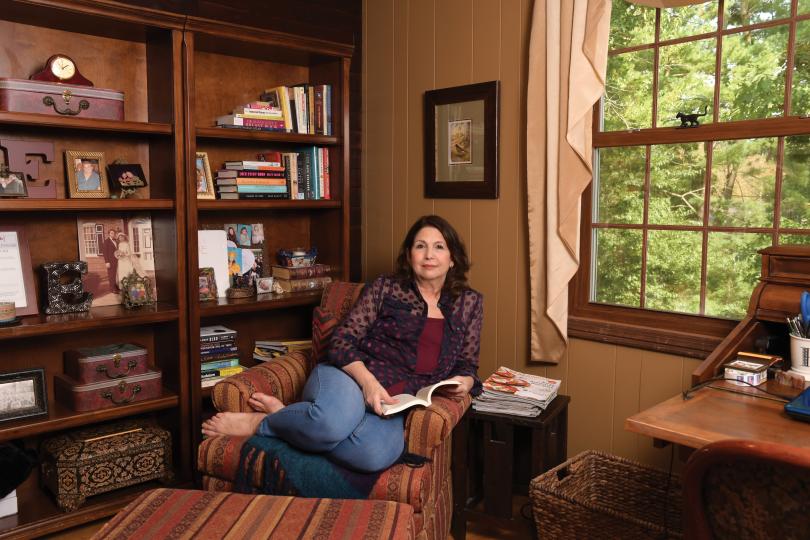 On a recent summer afternoon, Amber Reeves placed a tarot card in front of a new client named Ellen LaCorte ’73. The card depicted a priest-like figure wearing a red robe and gold crown. He appeared to be giving a blessing.

“There’s very good energy for you here,” Reeves said. “This is a lovely omen.”

The pair had arranged to meet for a tarot card reading at an independent bookstore in Philadelphia called A Novel Idea. LaCorte had appeared at the store a week earlier to promote her debut novel, The Perfect Fraud, published by HarperCollins. The book, which was hailed as a top summer read by Publisher’s Weekly, tells side-by-side narratives of Rena, a desperate mother seeking a cure for her daughter’s mysterious ailment, and Claire, a young psychic undergoing a crisis of faith. Although Claire comes from a family of psychics, she believes she never had “the gift” that has sustained the family business.

Since the book’s publication in June, LaCorte had been actively fretting about its performance — not that she had any reliable data on book sales. She had not sought any numbers from her publisher. Her feelings were the central topic of the reading, around which all of Reeves' interpretations revolved. On the table between LaCorte and Reeves, an overhead lamp cast a warm light, illuminating the upturned tarot cards. Next to them sat the deck, with a quartz stone placed on top like a cherry on a cupcake. Reeves, who was wearing a black sleeveless dress that revealed a menagerie of tattoos on her arms, legs and knuckles, picked up the deck and flipped over another card: the Star.

“This card is mystical, surreal,” she said. “It encourages you to be meditative, to allow a more imaginative space to open up within you.” “That makes perfect sense to me,” LaCorte said. “I’m in a place where I should be enjoying myself. But instead, I’m worrying.”

Over an hour, Reeves' interpretations of the cards prompted many similar exchanges, with LaCorte reflecting on her experiences as a new author. The reading resembled therapy as much as metaphysics. At times, LaCorte seemed to come to genuine insight through the process.

While on a book tour to promote the novel, LaCorte was surprised to learn how eager people were to learn not just about her book, but about her as a person. “It has made me more vulnerable than I maybe would have liked,” she told Reeves.

Reeves, who is known professionally as "Amber Astronauta," says she aims to provide clarity to her clients as much as anything. Reading tarot is her full-time job, and she appears at A Novel Idea once a month for its regular tarot salon. She was one of a dozen or more psychics and tarot card readers LaCorte has met and interacted with in relation to the novel. She visited many as part of her research, but she has, in fact, been visiting them all her life.

Years ago, one left her in tears after saying LaCorte wasn’t contributing enough to her marriage. (Her husband assured her she was.) Another made a prescient remark about her health. Through all of those experiences, LaCorte has always hesitated to state a definitive opinion on the validity of psychic ability.

"There's certainly enough there to consider validity as a possibility,” she said. 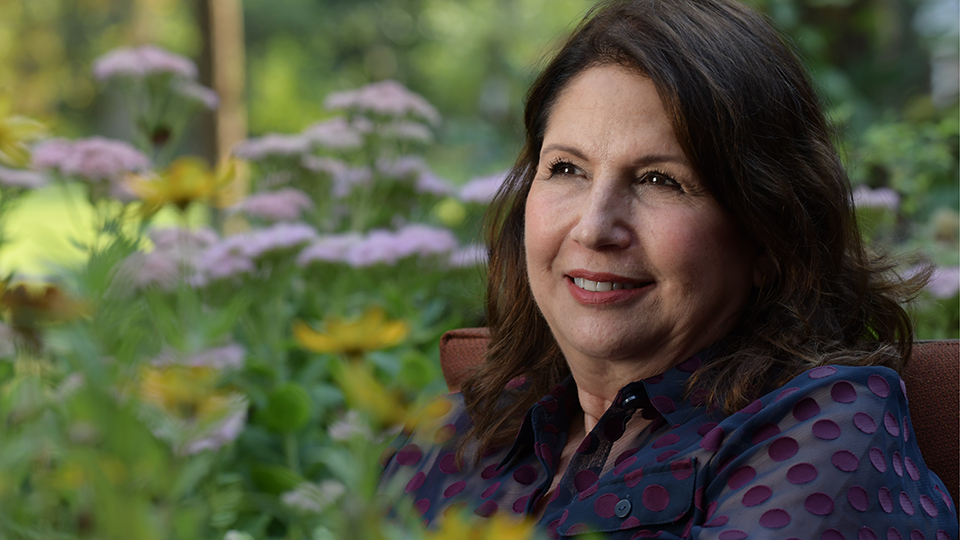 It might not come as a surprise that LaCorte remains open to the supernatural. Over her life, she has demonstrated a capacity to follow her intuition in ways that are, if not otherworldly, at least fanciful. At 68, she is still taking ballet lessons, including pointe. And LaCorte has been fearless in the face of the unknown, switching careers and embracing new opportunities in ways that would make conventional, play-it-safe types tremble.

LaCorte (née Segal) was born in Pennsylvania and moved to New Jersey in 1968 as she was beginning to consider colleges to enroll in after high school. She chose nearby Rider College, as it was known then, and like many Rider students, she was drawn to its small size and the intimate nature of its campus community. She became a cheerleader and joined the staff of Rider’s yearbook, The Shadow, where she attracted the notice of a student photographer named Michael LaCorte ’71. She selected education as her major, with an emphasis in English.

“I got to do things at Rider that I wouldn't have been able to do at a bigger school,” LaCorte said. “I had an English professor who prompted me to speak up and set me on a path to excel scholastically. For a person like me who had a lackluster high school experience, it was so encouraging.”

Although her academic experience was proving positive, LaCorte had a setback when she participated in a practicum in her senior year and realized teaching wasn’t for her. Too late to make a change, she graduated without a definite plan. She decided to move to Arizona to be with her boyfriend, Mike, the photographer she met as an undergraduate and had started dating after her freshman year. Mike had received a bachelor’s in accounting and would eventually become a business analyst. But in Arizona, he was establishing a construction company with his brother, building custom homes at a time when the state still seemed to be dominated more by orange trees than people.

Before the move, LaCorte recalls she had exactly $21 in her bank account. Ellen and Mike married in 1977 and spent the next 20 years of their lives in Arizona. Ellen began a career in human resources, a field in which she would thrive for decades. She enrolled as a graduate student at Arizona State University, receiving a master’s in English and then a doctorate in higher and adult education administration. She and Mike also began raising a family. They now have two sons. Their oldest, Chris '04, followed in his parents’ footsteps and attended Rider, where he graduated with a bachelor's in business administration with majors in marketing and economics and also met his wife, Roxanna Netta-LaCorte '04.

In Arizona, which is one of the settings of The Perfect Fraud, LaCorte was living a full, busy life — one that contained only a small seed of her future writing life. “I always had stories in me,” she said. “When I look back at my files, I was already collecting notes for stories in the 1990s. But even if I had a book in me at the time, it wouldn’t have found a way out.” Eventually, LaCorte and her family moved back to New Jersey. In 1998, she starting working at her alma mater as Rider’s director of human resources and affirmative action officer. After a decade, she moved on to Villanova University as its associate vice president for human resources. “It was a great job, with great people, but there was something missing in my life,” she said.

Before she could leave human resources behind for good, LaCorte began pursuing outlets for her artistic side in her spare time. She took ballet lessons and started acting and singing in community theater. She enrolled in painting classes.

“I realized this was where my heart was,” she said. “At that point, I also felt like I had a book in me.”

She and Mike made a plan for her to transition into a new life. LaCorte officially left the human resources field in 2012 to pursue her dream of writing a novel. She discovered it would be the most difficult objective she ever set for herself. 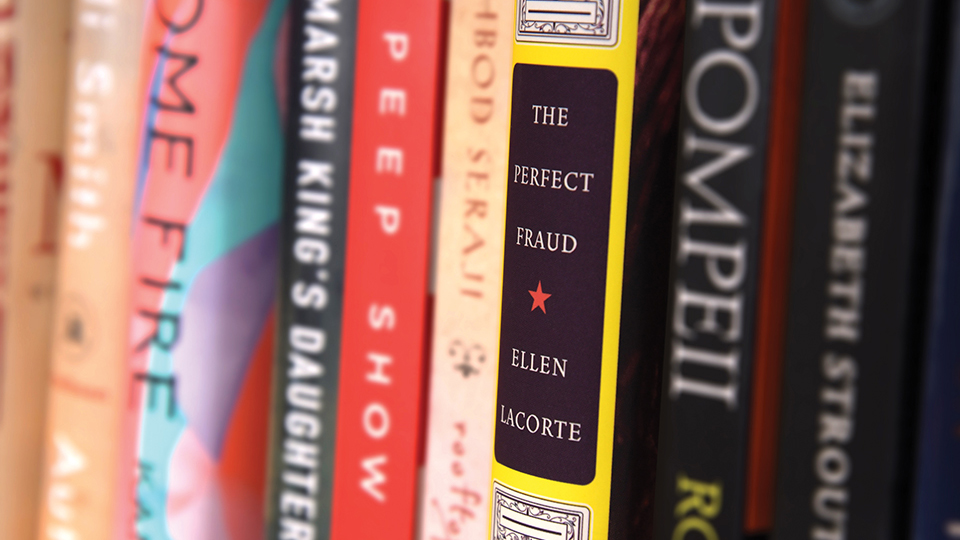 The Perfect Fraud is advertised as LaCorte’s debut novel, but in total, she has written three books. The first two were never published.

In pursuing a new career, she really had to learn two new fields at once: writing and publishing. As an avid, lifelong reader with an advanced degree in literature, she was more prepared for the former than the latter. For years she had been collecting story ideas, teasing out the storytelling possibilities from life experiences and articles she read in the newspaper. It was after a visit to the psychic who told her she wasn’t giving enough to her marriage (but offered to help her for $450) that the character of Claire first entered her imagination.

"Characters come fully formed in my head, and they become alive to me," LaCorte said. So much so that once she begins getting them down on paper, she cannot bring herself to change their names any more than she could bear changing the names of her own children.

The business of publishing a book presented a different kind of challenge. "I was a rube. It required a whole education, and I was learning something new and making mistakes," LaCorte said.

Despite those limitations, after completing her first novel, she received genuine interest from publishers. LaCorte recalls that her initial reaction was, "This is a cinch!" While providing encouraging feedback, one agent ultimately advised LaCorte to shelve the book. Although the work was promising, the agent’s perspective was that it was not ready for a wide readership. LaCorte heeded the advice, but after receiving a similar message with her second book, she was ready to give up.

Her family encouraged her to persevere, and six years after leaving her comfortable career, LaCorte secured a book contract for The Perfect Fraud. It was a moment that no psychic had predicted, but it was the future that LaCorte had envisioned for herself and worked tirelessly to make true.

“There’s an advantage to being a grown-up when something like this happens,” LaCorte said. “You take it with some equanimity. I’m both thrilled and overwhelmed, and I’m committed to being on this path and making it a full second career. I remember looking ahead and thinking that I didn’t want to slog toward the inevitable retirement. It’s encouraging to know that you can change and continue to grow. There’s a certain wonderful freedom in that.”