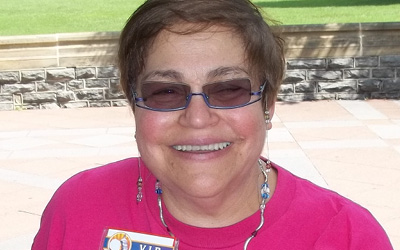 On April 25, 2004, more than one million people converged on Washington, D.C. Their purpose was to attend the March for Women's Lives, a rally to protect abortion rights, reproductive justice, access to birth control and women’s health.

At one point, Alice Cohan '74, who successfully organized the massive event, stood on stage and announced the official attendance count: 1.15 million people. It was one of the most thrilling moments of a decades-long career advocating for women’s rights.

In July, Cohan received a lifetime achievement award from the National Organization for Women (NOW). “When people organize, they make their voices heard,” Cohan says. “There’s power in coming together.”

It’s a lesson she’s cultivated throughout her life.

Originally from Ewing, N.J., Cohan enrolled in night classes at Rider while working at Princeton University. She chose to study political science, a subject that had interested her ever since she attended the Democratic National Convention at 12 years old in Atlantic City in 1964. She wasn’t sure where her education would take her. The future organizer says simply: “I wasn’t a planner. Political science was just what I was interested in.”

As an undergraduate, Cohan traveled to Europe with Rider faculty and completed a study on women in European politics that gave direction to her career. After graduating, she worked for the advocacy group NJPIRG and then with NOW. “I ended up traveling all over the country organizing with local activists,” she says. As part of the work, she would be on the road for six months at a time, with only one week back at home in Washington, D.C., in between — a grueling routine.

Cohan was still at Rider when she was first exposed to the work being done on behalf of the Equal Rights Amendment, a proposed amendment to the U.S. Constitution that was first introduced in 1923. It would guarantee equal rights for all Americans regardless of sex. She has been working on it for most of her life, up to the present day.

An important moment for her, and the amendment, may be approaching in the upcoming election. The Virginia Senate recently passed a resolution to ratify the amendment, sending it to the House of Delegates for the fifth time in the past eight years. The House has never passed the resolution, but if it were to, Virginia would become the 38th state to ratify the amendment, setting up a probable fight with Congress and the U.S. Supreme Court for it to be added to the U.S. Constitution. Its fate will become more clear if Democrats manage to take control of the chamber in November. As the political director for Feminist Majority Foundation, Cohan has her nose to the grindstone to ensure that happens.

“I remain enthusiastic about the work because I’m passionate about the issues and the people who come together to work on them,” she says. “There is opposition everywhere we look, and its root is money. People profit from discrimination. Only if we are strong and united can we move closer to equality.”