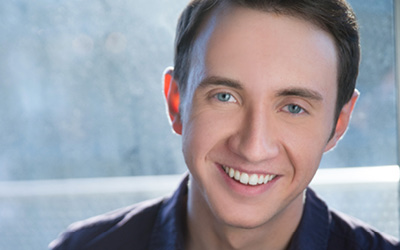 Cody Cooley '16 is a grump — a self-proclaimed grump. And his friends agree.

So much so that when they saw the Broadway production of The SpongeBob Musical, they all thought Cooley would be a perfect fit for SpongeBob's notoriously crabby neighbor, Squidward Q. Tentacles. Little did he know that a year later he would be preparing to tour the U.S. as Mr. Tentacles himself.

Based on the animated Nickelodeon TV show SpongeBob SquarePants, the musical translates the beloved main characters into relatable versions for the stage. Cooley's character, Squidward, is — as his name would suggest — a squid with tentacles. Cooley's costume incorporates two extra legs that function seamlessly as if they are attached naturally.

"The legs are just part of me," he says. "All the costumes are based in reality, so the legs work like normal legs. They look real so they're not too out there."

In the show, a volcano is erupting and threatening the town of Bikini Bottom. The townspeople band together and host a benefit concert to raise money for a vehicle that will transport everyone to safety. Cooley's character takes charge of organizing the concert, though his true desire is to perform in it. The result is an elaborate, classic Broadway tap number, with all four legs.

"The number couldn't be more Broadway if you tried. It's the most spectacular tap number you've ever seen — very '30s and '40s style, classic Broadway," he says.

While Cooley's extra limbs look like natural extensions to the audience, shuffling across the stage with them took some getting used to.

"I've been tapping since I was 3, but learning to tap with four legs was certainly interesting," he says. "I've never done anything like that before. You're essentially adding 25 extra pounds to yourself."

The show hosts an impressive score with original songs by an array of pop, rock and rap artists, including Steven Tyler and Joe Perry of Aerosmith, Sara Bareilles, John Legend, Panic! At the Disco and many more.

"There are so many different styles that there's literally something for everyone," Cooley says. "We go from singing an upbeat pop song to a soulful ballad to rapping."

The ability to use some of his own personality traits to tap into his character's makes the role a fun one for Cooley.

"I almost don't even have to think," he says. "It's just learning the script and choreography. I can really tap into the grouchy side of things naturally."