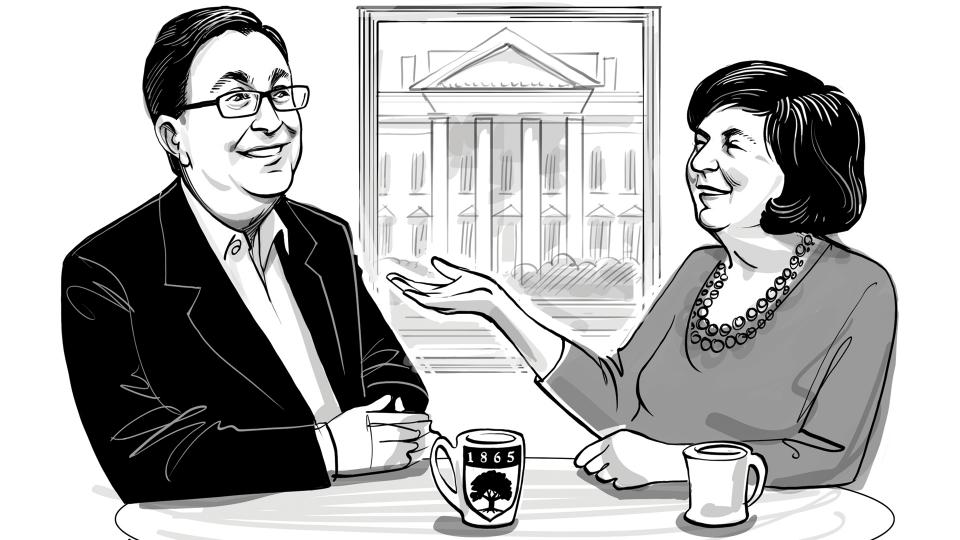 Ben Dworkin (Ph.D. in political science, Rutgers University) is the director of the Rebovich Institute for New Jersey Politics at Rider University and adjunct assistant professor of political science. Dworkin has built a reputation as one of New Jersey’s most insightful political analysts. He is sought out regularly by the media, including The New York Times, The Wall Street Journal and numerous network news shows. Dworkin has also worked on several political campaigns, focusing on message development, press relations, debate preparation and field operations. Miramax featured Dworkin on the DVD of the Oscar-winning film Life Is Beautiful.

Myra Gutin (Ph.D. in communication, University of Michigan) is a professor in the Department of Communication, Journalism, and Media and author of The President’s Partner: The First Lady in the Twentieth Century and Barbara Bush: Presidential Matriarch. She is working on a biography of Betty Ford. Gutin has written numerous articles on the topics of American first ladies and women in politics. She is frequently consulted by the media. In January 2014, she was featured on the C-SPAN series America’s First Ladies: Image and Influence, discussing former first lady Barbara Bush.

How has the political landscape changed over the last several years?

Ben: There have been many changes in technology, partisanship, and communications, but one of the biggest changes has been the nation’s demographics. The Hispanic and Asian-American communities are growing, and these younger voters are tending to vote Democratic. The base of the national Republican party remains white voters, and – as a share of the national electorate – are shrinking.

Myra: Right, there’s an old saying, "You enter left, and exit right." That no longer seems to be the case for the American people.

Ben: Another often-used quote in politics, usually attributed to Churchill, though it is not clear he actually said it, is that, “if you are not a liberal at 25, you have you heart.  If you are still a liberal when you are 35, you have no brain.” These young voters who are pretty strong Democrats now may well change their partisan stripes when they get older.

New Jersey governor Chris Christie is running for president. What do you think he will do if he's not on the final ticket?

Myra: I could see Christie running for vice president. I think he realizes he won't win the nomination this time, but he has a chance to be kind of an acceptable VP candidate and then possibly move towards the presidency in four more years.

Ben: I disagree. I think Christie is passionate about being in charge—and in the VP role, he would be more of a figurehead in many ways. He’s not someone who wants to take the back seat; he wants to be front and center.

Myra: You don't think he would be a Spiro Agnew type?

Ben: Why would he? If he doesn’t win the nomination, he will remain governor of New Jersey through the end of his term in January 2018.  At that point, he can go and make some real money in the private sector, probably write a book, and then – if things work out – run again.  But I don’t see him ever as a VP candidate.

If Hillary Clinton does win the presidency, what will Bill's role be and what will he be called?

Myra: The jury is out on what the husband of the president would be called. The British press is referring to Bill Clinton as "the first laddie."  My guess is that he would be called the first gentlemen. Some years ago, Geena Davis was in a TV show that explored what it would be like to have a woman president. The show was called Commander in Chief. In one scene, the social secretary suggests to her husband, “You could pour the tea.”  Bill Clinton, after being president for two terms, is not going to do that. If Hillary wins the presidency, he will eschew much of the ceremonial parts of the role to surrogates, and likely stay busy with his foundation as long as there are no conflicts of interest.

Ben: That presents a unique situation because Bill is a former president and so they will still have to call him “Mr. President.” Hillary will, I think, be addressed as "Madam President."

Myra: In any case, it will help us develop a different lexicon and certainly different perceptions.

Who will be our final two candidates?

Ben: The election is still open ended. There are many very talented candidates on both tickets who are very well-financed.

Myra: Initially, I would've said Jeb Bush, hands down on the Republication ticket, but now, I’m not so sure. Mark Rubio is another viable candidate.

Ben: Jeb has brought together the Bush network, a result of his family’s legacy and the people he’s met in his own career as governor of Florida.  That is a significant advantage for him. But his conservative critics consider him pro-amnesty on immigration and pro-common core on education, neither of which will really help him in Iowa and New Hampshire.

Myra: Given the field of candidates, Bush doesn’t come across as extreme as some of the others.  That should help him if he becomes the nominee, but the Iowa caucuses and New Hampshire primary are usually dominated by pretty hard-core conservative Republicans, so it’s going to be a real challenge for Bush to get to the nomination.  For now, Bush has that national network and at this point, it's so important to raising money so that you can test and deliver your message.

How has social media changed campaigning?

Ben: It has significantly altered how people communicate. How you identify voters has changed from even four years ago. Twitter and Facebook are old school social media already. Today, every candidate has to have a social media presence well beyond a web page.

Myra: I went to a conference and Paul Begala, one of the architects of Clinton’s 1992 winning strategy was the speaker. He said that on the day Bill Clinton was inaugurated, there were 500 websites. But by the end of his first year, there were 5,000. Howard Dean, who ran in 2004, was really the first presidential candidate to use social media to raise money. He sent email messages, and he got funds that way. We used to talk about the fact that as you came to the end of a presidential campaign, it was critical to get editorial approval. Today, there are stories and opinions going on online, on Twitter and other places.

Tell us more about the class you are co-teaching.

Ben: Our class, Campaign Persuasion, is really one of the great examples of how the Baccalaureate Honors Program works at Rider. Both of us, me from a political science perspective and Myra from a communications perspective, offer specific insights.

Myra: The class meets twice a week and we are fortunate to have contacts with a wide network of political players who attend and speak about the nuts and bolts aspects of fundraising and communicating in all different aspects of campaigns. One of the by-products of this is that the students get to meet the people in their chosen industry. These are individuals who want to connect with students and will say, "Here's my card. If you're looking for a job, contact me."

Ben: We're taking different aspects of campaigns, such as speech writing, producing commercials, canvassing and fundraising. and putting our students through the paces to try to think about the theory behind each, and then how that theory gets implemented. As a part of this process, they will be assigned real-life candidates for whom they need to produce effective campaign communications, including 30-second television commercials.

Myra: They will be asked to put together a media kit, and create a Q& A. They also have to go out for a minimum of three hours and work for a candidate in New Jersey.  When we bring people into the classroom, students can ask them questions like "What is it really like to prepare for a debate?"

Ben: One of the other assignments is that they will write campaign speeches. However, they will be graded by how their individual speeches are performed by another person. We do it this way because one of the challenges of speech writing is trying to write in someone else's voice.  The class is really a chance to get them thinking about the theory behind campaign communications, because it's such a changing world.  More than 100 million people have to be persuaded to vote next year, and we want to show students exactly how that happens, because the outcome has a very real impact on our future.

Myra: Frequently, students will tell us that their vote doesn’t matter. This class gives us the opportunity to prove to them that they have a stake in their future, and their vote matters a great deal.