Skip to Page Content
‹ www.rider.edu
This slideshow is not enabled

On Oct. 17, Rider University hosted a building dedication ceremony to reveal a $5.5 million gift by former TE Connectivity CEO Thomas J. Lynch '75. No one was more surprised by the unveiling of the building's name than his best friend and fellow Rider alumnus, Joseph Adler '75, '90.

Held outside North Hall, the ceremony announced Lynch's $5.5 million gift, one of the largest individual gifts ever received in University history. As part of the multimillion-dollar pledge, North Hall was renamed Lynch Adler Hall. The renaming was a surprise not only for Lynch's longtime friend, but for most of the University community.

"There are so many moments in my life that I attribute to Joe Adler," Lynch says. "It seemed natural that if I was going to do something like this, he had to be a part of it. None of this would have happened without him."

Lynch and Adler have been friends since their grade school days. When it came time to decide upon a college to attend, Lynch followed in his friend's footsteps.

Lynch credits much of his success to his Rider education and his time as an undergraduate student.

"This potential that I had no idea that I had was discovered here and cultivated here," he says. "I never would have predicted that 30 years later, I would be the CEO of a Fortune 500 company. There's no question about it. The deep education I got at Rider was integral to that."

Lynch earned a Bachelor of Science in Commerce with a major in accounting from Rider after only three years. He is currently serving his second term on Rider's Board of Trustees, having previously served as Trustee from 2005 to 2014. He is also currently the executive chairman of the Board of Directors of TE Connectivity, a world leader in connectivity and sensor solutions with 75,000 employees and $12 billion in sales. He served as the company’s chief executive officer from January 2006 to March 2017. Before TE Connectivity, he was president of Tyco Engineered Products & Services and executive vice president of Motorola. Lynch received Rider's Sesquicentennial Medal of Excellence in 2015 and an Alumni Recognition Award from the College of Business Administration in 2003.

Adler also earned his degree, a Bachelor of Science in Commerce with a major in accounting, in three years. He added a Master of Business Administration from Rider in 1990. Adler worked for more than 30 years in the food industry. He recently retired from Pinnacle Foods, which manufactures and markets branded food products such as Birds Eye vegetables and Duncan Hines baking mixes, as a vice president and controller. His father, Jerrold Adler '49, and sister, Karen Adler '82, also graduated from Rider. For many years Adler taught as an adjunct professor in Rider's College of Business Administration.

Lynch says he wanted to give back to ensure that future Tom Lynchs and Joe Adlers could receive the same opportunities to unleash and develop their potential at Rider.

"I want to make the opportunity to come to Rider as available as possible. That's simply how I look at it," he says.

Senior Class President and communications studies major Olivia Battinelli spoke at the event. Like Lynch, she came to Rider at the urging of a good friend, Marissa Galletti '17, who received a bachelor's in musical theatre from Rider and is currently performing overseas in Hong Kong.

"Marissa’s recommendation brought me here and what an incredible set of experiences and opportunities I have had in my three-plus years at Rider," Battinelli said. "Marissa’s advice to me was to get involved and boy did I. All of my roles at Rider have been tremendous learning opportunities and have been extremely rewarding and most importantly have enabled me to pay Marissa’s mentorship forward as a Rider ambassador."

Lynch's unrestricted gift will be used to support some of the University's highest priorities. Several multimillion-dollar gifts have bolstered Rider's recent fundraising efforts and have supported student scholarships and campus improvements. The University raised a record amount of funds in the fiscal year that ended in June.

"This potential that I had no idea that I had was discovered here and cultivated here," he says. "I never would have predicted that 30 years later, I would be the CEO of a Fortune 500 company. There's no question about it. The deep education I got at Rider was integral to that." 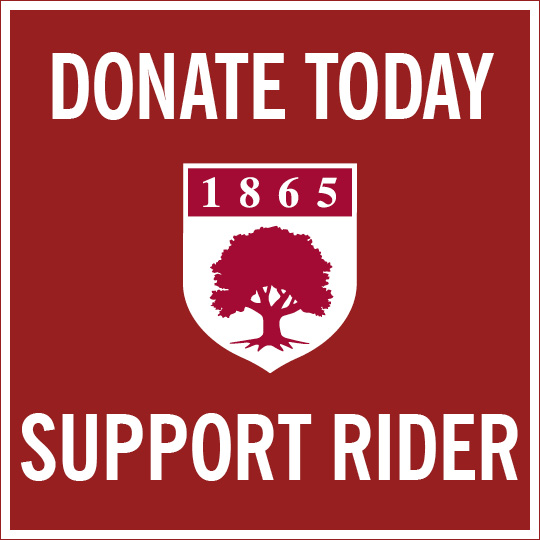