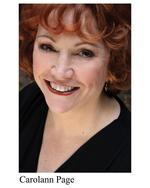 The name CAROLANN PAGE defines the term crossover artist, having earned critical and popular acclaim as the creator of leading roles in world premieres in both the musical theatre and operatic worlds.

Highlights: In the international world of OPERA she is praised for her creation of the role of Pat Nixon in the Emmy and Grammy winning John Adams opera NIXON IN CHINA. In the world of music theatre, she lighted BROADWAY with her stunning Cunegonde in CANDIDE and amazed the OFF BROADWAY world with her comedic talent creating the role of the Iowa Housewife in MENOPAUSE, THE MUSICAL. In the CONCERT world she has appeared with major symphony orchestras internationally, with repertoire from Beethoven, Britten and Gorecki to her own ‘Evening of Sondheim’ with the Boston Pops. As a DIRECTOR, she has staged productions for the Circle Rep Lab in New York City, Colorado's Music In The Mountains, Pennsylvania's Gretna Theatre and at New York University and Carnegie Mellon University. As a TEACHER, she has graced the faculties of the Manhattan School of Music, New York University and is currently Adjunct Assistant Professor of Voice at College of Arts and Sciences of Rider University.

One of the youngest voice majors to be accepted into The Curtis Institute of Music, Ms. Page continued her studies with Judith Raskin and Margaret Harshaw, paving her way into the world of Opera. Signature roles with opera companies internationally, include Elvira in DON GIOVANNI, all three ladies in LES CONTES d' HOFFMANN, both Mimi and Musetta in LA BOHEME, Juliet in ROMEO AND JULIET and the title role in MANON. Avidly sought after for her impeccable musicianship and sterling acting, she has starred in contemporary operas including Floyd's THE PASSION OF JONATHAN WADE, Hagen's SHINING BROW and Sir Michael Tippett's THE ICE BREAK. Her extensive work in Chamber Music and Recital repertoire include appearances at the prestigious music festival stages of Marlboro, Blossom, OK Mozart, Chautauqua, Rushmore and Ambler and as a featured guest artist with the prestigious Da Camera Society, An die Musik, Cape and Islands, Rushmore and Golliard ensembles.

Other Broadway credits: Marjorie in ALLEGRO, SONDHEIM: A CELEBRATION AT CARNEGIE HALL and MUSIC IS. Off Broadway: (original casts) Mary Lincoln in ASYLUM: THE STRANGE CASE OF MARY LINCOLN at the York Theatre, Gertrude Stein in BLOOD ON THE DINING ROOM FLOOR at the Signature Theatre and Eleanor Roosevelt in FIRST LADY'S SUITE at NYSF's Public Theatre. A proud member of Actor's Equity for over 40 years, she has performed more than sixty roles Nationally and Regionally from a munchkin in THE WIZARD OF OZ with Margaret Hamilton to her recent performance as Miss Marple in Agatha Christie’s A MURDER IS ANNOUNCED. RECORDINGS and TV include: Pat Nixon in NIXON IN CHINA (Nonesuch and Great Performances), Gayle in Tippett’s THE ICE BREAK, A TRIBUTE TO SONDHEIM LIVE from CARNEGIE HALL, Antonia in MAN of LA MANCHA with Placido Domingo and Patty Naransky in the episode Mega of LAW & ORDER.

Ms Page was a founding Faculty member of the Professional Musical Theatre Workshop at the Manhattan School of Music (1992-2010) and was Adjunct Professor of Voice and Director of the Opera /Theatre Workshop at New York University (1997-2002). She has maintained an active private voice and acting studio in NYC since 1992. Her students continue to appear on operatic stages internationally and in countless Broadway shows.

Ms. Page comes from a Musical Family. She is the daughter of world renowned conductor, Robert Page and Glynn Page (voice teacher Emeritus, Carnegie Mellon School of Drama). Her sister, Paula Page, was principal harpist with Houston Symphony (1984-2014) and is on the faculty of Rice University and University of Houston. Ms. Page’s son is Broadway actor/singer, Alexander Gemignani.

For a complete profile visit www.carolannpage.com